Longford Town facing another tough task away to Finn Harps 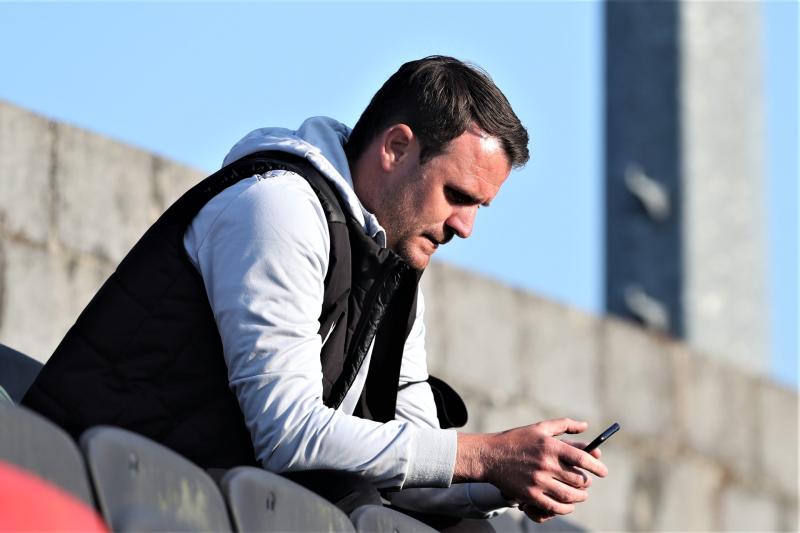 Suspended Town manager Daire Doyle pictured at Bishopsgate on Monday for the defeat against Waterford but he will be back in the dug out against Harps on Friday Pic: Syl Healy

After the busy schedule last weekend with the draw against Dundalk at Oriel Park on Friday and the extremely disappointing defeat against Waterford at Bishopsgate on Monday night last, Longford Town are back on the road again for another tough task against Finn Harps.

It’s a long trip to Ballybofey for Daire Doyle’s side who will be hard pressed to get something out of the game at Finn Park this Friday night (kick-off 8pm).

When the teams clashed at Bishopsgate back in April, the match ended scoreless and Harps are always extremely difficult opponents - particularly at their compact home ground as the Premier Division season reaches the midway point.

Longford were without the injured quartet of Dean Zambra, Dean Byrne, Aaron McNally and Callum Warfield for the first meeting of the clubs a couple of months ago but battled it out for a very hard earned draw.

The Town team that started in that 0-0 stalemate against Harps has changed considerably in recent weeks with defender Joe Gorman gone from the club. Michael Kelly, Joe Manley, Sam Verdon and Aaron Robinson were also in action against Harps but the Longford boss Doyle has done a fair amount of rotation with his squad in his  frantic bid to find the right formula when it comes to getting results.

Aaron O’Driscoll has been playing well in the centre of the defence and the Town worked so hard to get a result against Dundalk with former Longford player Vinny Perth back in charge of the struggling Co Louth club. Perth made four changes from the team that suffered a shock 3-1 defeat at home to Waterford the previous week with captain Chris Shields returning from suspension.

Aaron McNally fired Longford in front from a fine strike in the early stages of the game as he connected with an excellent Paddy Kirk cross to fire the ball past the opposing keeper Alibi. Shields equalised for Dundalk just before the half hour mark but they squandered a glorious opportunity of winning the match when Pat Hoban failed to convert a harshly awarded penalty late in the second half.

The superb Town keeper Lee Steacy came to the rescue when he saved the spot kick in the 73rd minute and also kept out the rebound as Longford left Oriel Park with a point.

After losing at home to Waterford, the Town are now facing a fierce battle to avoid automatic relegation and taking on Finn Harps in Ballybofey is always a difficult proposition. Having said that, Harps lost 2-1 at home to Derry City last weekend and suffered another setback in the heavy 4-1 defeat  away to St Patrick's Athletic on Monday night.

Kosovar Sadiki is a top quality player in a rock solid back four alongside Ethan Boyle while Barry McNamee is a key figure in the midfield sector.

When it comes to scoring crucial goals, Adam Foley is the dangerman for the Donegal side and Harps have a strong bench in their fierce desire to fight until the final whistle under the driving force of their inspirational manager Ollie Horgan.

This is another stern test for Longford Town who are  now four points adrift of Waterford at the bottom of the table with the pressure mounting in their quest to avoid an immediate return to the  First Division.