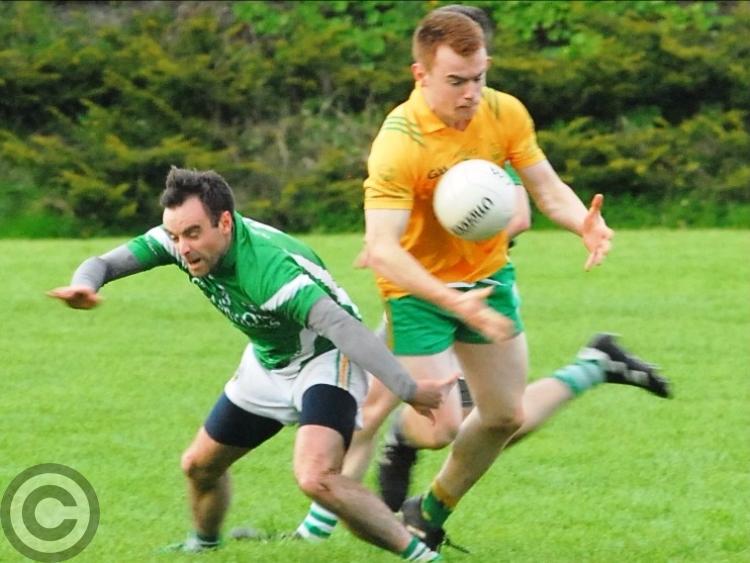 Keelan McHugh gathers the ball ahead of Gavin Sammon. Photo by Willie Donnellan

It is early days for judgements but Ballinamore Sean O’Heslin’s definitely are among the favourites for this year’s Senior Championship title.

Last year’s Intermediate champions made short work of their fierce rivals and fellow parishioners Aughnasheelin in Ballinamore on Saturday and demonstrated a strength in depth and hunger for the ball that marks them down as a team to watch.

Granted O’Heslin’s will face much sterner tests in the weeks to come as Aughnasheelin were desperately weakened by the absence of six first choice players, losses they simply couldn’t afford, but it was the manner Ballinamore went about their business that impressed.

In Dean McGovern, Ballinamore had an outstanding midfielder while Wayne McKeon's leadership and experience is a huge asset, their prowess in this area fortified by the return of Shane Moran.

Upfront, Luke Murphy, Niall McGovern and Mark McGrory can threaten any defence while a young but highly mobile defence, reinforced by the return of Matthew Murphy, looks more than capable of matching the best attacks in the county.

Aughnasheelin will be disappointed by the scale of the defeat but once they get their missing players back, they can be a match for the best teams in the Intermediate grade as they won't find anyone like Ballinamore in that competition later in the Summer.

Sean O’Heslin’s started like they meant business - Dean McGovern was denied a goal by a close range block while Niall McGovern pointed after a good turn.

Conor Cullen showed his class by opening Aughnasheelin’s account on 13 minutes but Niall McGovern responded with a monster fifty that sailed high over the bar. The younger McGovern was denied a goal while Fintan Fitzpatrick added a point for Aughnasheelin.

But O’Heslin’s were looking a step above and points from Niall & Dean McGovern either side of a Luke Murphy point while Shane Moran pointed after good team play.

Dean McGovern added another point but it was Aughnasheelin who finished the half with a strong flourish, Fitzpatrick firing over a nice point while, with less than 10 seconds left in the half, Conor Cullen burst through the middle of the Ballinamore defence, left the defenders trailing in his wake, to fire low to the right corner.

That left Sean O’Heslin’s leading 1-7 to 1-3 at the break but they quickly set about putting the game beyond Aughnasheelin’s reach with Luke Murphy quickly tapping over three points while Niall McGovern burst through and drilled the ball to the net from a tight angle on four minutes.

Aughnasheelin tried to fight back and had good points from Gavin Sammon and a Barry McWeeney free. Ballinamore hit back with points from Luke Murphy (free) and Shane Murphy to keep the gap at ten points.

Aughnasheelin had three points in under three minutes from Fitzpatrick (free), Conor Cullen and Gavin Sammon but McKeon responded with an excellent individual score on 17 minutes and Luke Murphy followed up with a free.

Conor Cullen went off on a great run, just like the one that led to a goal in the first half, but O’Heslin’s crowded him out and restricted him to a point.

But O’Heslin’s weren’t finished and Wayne McKeon sold yet another of his trademark dummies to break through the Aughnasheelin defence and fire a great shot to the net with eight minutes left in the half.

Luke Murphy finished off the scoring for O’Heslin’s who demonstrated their strength in depth by bringing on five strong substitutes.

The game did end with a controversial point as Fintan Fitzpatrick saw a score awarded for a shot that this writer and most of the stand clearly saw was wide. Referee Seamus Mulhern, positioned on the far side of the field, had no option but to award the score on the advice of the umpire.

Main Man: Sean O'Heslin's  had a couple of outstanding performers. Dean McGovern bossed the show from midfield, his brother Niall was deadly in front of goal and Luke Murphy is a potential match winner. Mark McGrory, Wayne McKeon and Shane Moran all stood out also while Conor Cullen, Fintan Fitzpatrick and Gavin Sammon were best for Aughnasheelin.

Talking Point: Are Ballinamore the real deal? On this form, yes but this victory came against a weakened Aughnasheelin so you can't read too much into it. But they have an impressively strong squad that looks, even at this early stage, like it can challenge for honours in the championship.

Turning Point: It came early but when Mark McGrory drilled home a goal three minutes in, it set the tone for Saturday's encounter.

Ref Watch: Seamus Mulhern did a solid enough job and can't be faulted for an error over a controversial point for Aughnasheelin.

Highlight: Ballinamore got three excellent goals but the best was undoubtedly Conor Cullen's effort for Aughnasheelin, a barnstorming run and finish.

Lowlight: Not too many, perhaps that Aughnasheelin couldn't truly challenge their neighbours.