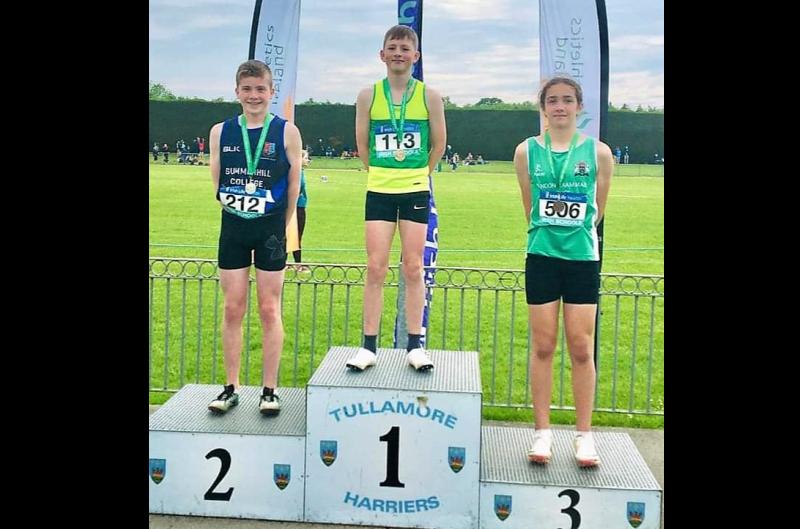 Leitrim's racewalking tradition is well established but there could soon be a hurdling tradition in the county after Drumkeerin's Mark Hazlette stormed to a fantastic gold medal in the Minor Boys 75m hurdles at the Irish Life Health All-Ireland Schools Track & Field championships in Tullamore on Saturday.

On a weekend when Carrick AC's National 110m hurdles champion Gerard O'Donnell recorded the fastest time of the year by an Irish athlete, North Leitrim AC's Mark Hazlette was writing his own piece of history in Tullamore.

The Schools champs is widely regarded as the toughest juvenile event in Ireland to medal in but in his first ever appearance in the event, Mark sped from the blocks in the 75m hurdles to claim a superb gold medal.

The Lough Allen College speedster got out of the blocks well and moved into the lead after the third hurdle but had to withstand the late charging Brian Cullinan of Summerhill College in Sligo to take the gold medal in a time of 11.70 seconds with the Sligo athlete just seven hundredths of a second behind in second place. Rounding out the podium was Bandon Grammar School's Max Clover who clocked a time of 11.94 seconds.

The victory comes after Mark claimed the U14 hurdles title at last year's National Community Games Finals and follows clubmate Scott Williams finishing second in the U13 indoors finals earlier this year.

Lough Allen College almost had a second All-Ireland medal to celebrate with Luke Fitzmaurice finishing fourth in the Inter boys walk. The North Leitrim AC clubman clocked a time of 9 mins 50.80 seconds in a walk won by Andrew Glennon of St Finnian's Mullingar in 8.54.49 with Patrick Hyland of St Attracta's Tubbercurry second in 8.59.69 and Seamus Clarke of St Muredach's Ballina third in 9.08.48.

At adult level, Carrick AC's Gerard O'Donnell recorded the fastest time by an Irish athlete over the 110m hurdles on Sunday with a 14.18 second victory in Oordegem in Belgium. Running with a 1.6 m/s wind at his back, the Carrick athlete was a clear victor of his race, finishing fourth in the overall standings.

The time sees him top of the Irish lists for the 2022 season with the national championships in Morton Stadium in Santry on the weekend of June 25-26.

His Carrick AC clubmate Eanna Madden was in action in Spain where he ran a time of 48.21. The Mohill man was not helped by his lane draw that left him isolated in lane eight and an empty lane seven inside him, causing him to go out too cautiously over the first 200m.