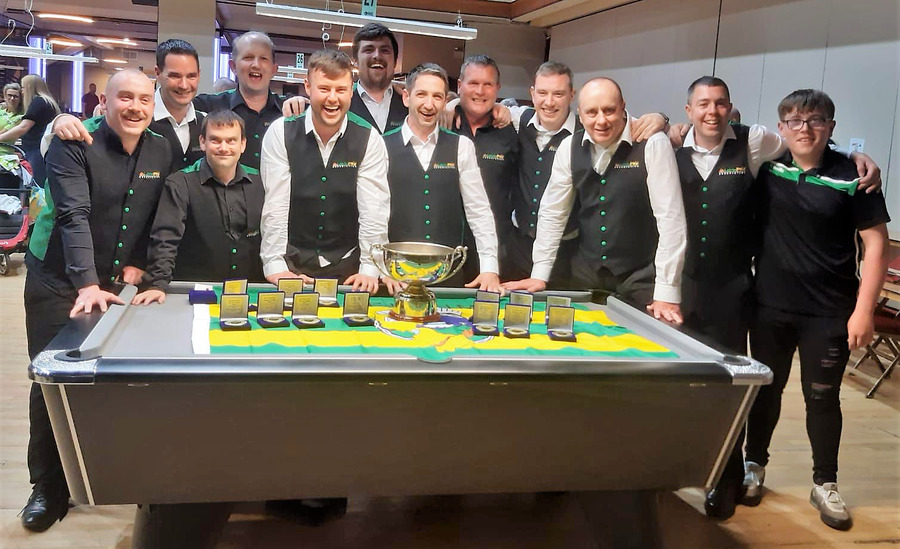 Leitrim claimed an historic first ever Senior title at the All-Ireland Inter Counties Pool championship in the Gleneagles Hotel in Killarney as they produced a stunning effort to win the title in brilliant style.

In the Men's Senior category, Leitrim were drawn into a tough group with Armagh, Cork, Cavan, Louth and Mayo with the top two teams after the round-robin qualifying for the knockout stages.

They faced Louth in their first match on Wednesday May 25, and after trailing 6-5, Leitrim dug deep and won seven of the next eight frames to take a commanding 12-7 lead. Louth had mini-revival but Brendan Shivnan stemmed the tide before Colin Crossan took out the match-winning frame to give Leitrim a 14-10 victory.

Next up was Armagh. Leitrim  reeled off five wins to go 5-3 up. It remained tight to 11-7 but Armagh fought back to 13-12 before super sub Barry Reynolds broke and cleared to close out the match 14-12.

Leitrim faced a hugely experienced Mayo team late Thursday night and got off to another slow start as they trailed 6-3 after the first set. Leitrim closed the gap to 12-10 but6 Mayo finished strong to win 14-10.

Leitrims next game against Cavan on Friday was a chance to exact revenge for the 2021 semi-final loss. Cavan started strongly to lead 5-3 but with some flawless pool and one of the most complete performances of the championship, Leitrim won 10 of the next 11 frames to stun Cavan 14-6.

This left Leitrim in a great position before their top of the group match with Cork on Friday night with a place in the semi-final for the winner. Wins for Crossan and Donnelly left Leitrim 6-3 up after set one but Cork won the first 4 frames of set two to go 7-6 ahead.

Leitrim responded with five wins on the bounce to leave it 11-7 going into the third set. Cork wouldn’t go down without a fight and battled back to 11-10 but wins from O’Neill and Brady to go 13-10 left Kilmartin to take out the winning frame 14-10 and put Leitrim into the semi-finals.

Leitrim faced Cork again in the semi-final with Leitrim leading 9-6 to Leitrim after the first two sets. From there, they played some flawless pool to win the next five frames and take their spot in their first-ever All Ireland Senior final where they would face Tyrone.

In the final Leitrim got off to a flying start with a great finish by Kilmartin, followed by clearances from McWeeney and Gaffney to make it 3-0. O’Neill and Crossan extended the lead to 5-2. A clearance from Shivnan, a tactical frame victory for Sweeney and another clearance from McWeeney gave Leitrim a dream start and an 8-2 lead.

Tyrone hit back with three quickfire finishes to close the gap to 8-5. Wins for Conlon and Crossan stopped the Tyrone momentum and a win for Sweeney made it 11-7 at the end of the second.

Leitrim didn’t wilt with Shivnan and Crossan winning to leave the score 13-8 and leave Leitrim one frame from victory. Tyrone won the next to make it 13-9 but Leitrim were not to be denied as up stepped Jamie Gaffney with an excellent break and finish to send the Leitrim team and support wild.

The scenes that followed will long be remembered as a lot of grown men were reduced to tears. All that was left to do was lift the cup and enjoy the celebrations. Chairman John Casey had the honour of being the first Leitrim man to lift the All Ireland Senior trophy! This seemed very fitting for all the trojan work John puts in behind the scenes over the years.

Leitrim Pool are in their 25th year since being formed and a lot of people soldiered for and put in a lot of work over the years and the victory belongs to everyone involved!

In the Men's Intermediate category, the team were drawn into a tough group with defending champions Carlow, Wexford and Louth with the top two teams qualifying for the quarter-finals. Co-captains Richard Shanley and Darren Phillips and squad John Casey, Stephen Deely, David Flynn, Stephen McTague, Darragh McQuaid, Jonathan Moolick, Frank Hanly and David Moolick were cursed by slow starts in all three games with Wexford winning 14-10, Louth 14-8 and Carlow 14-7 to end Leitrim’s chances.

Leitrim also had Eoin Phillips in action in the U12 and U15 singles events. Eoin got off to a flyer in the U15 event winning his first two matches to make the quarter final where he lost 4-2. In the U12 section Eoin topped his group to qualify for the semi finals where he was very unlucky to lose 2-1. He equipped himself brilliantly and is no doubt a future star for Leitrim.

If anyone would like to test their skills and get involved, we have a members hall based in Drumshanbo with two pool and one snooker table. Hopefully, this win can inspire more younger players to take up the game and represent Leitrim at future championships. Please check out our website Leitrim pool.com or our page on Facebook for more details.