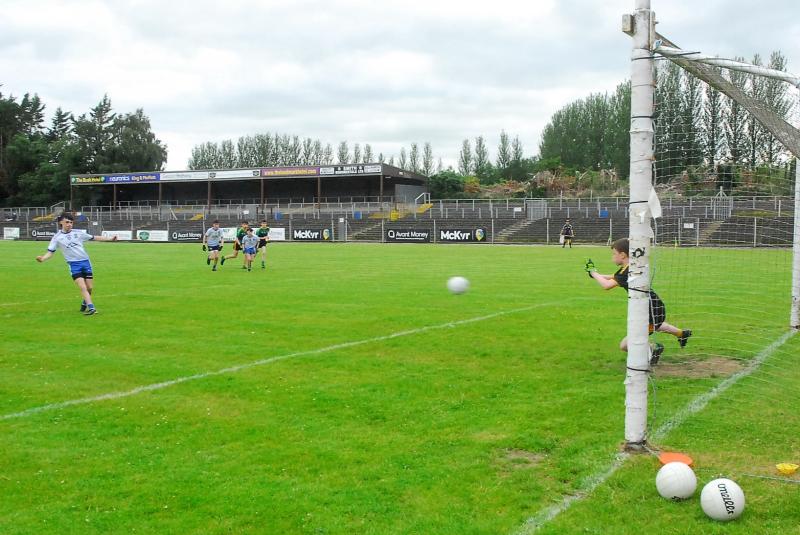 A powerful surge at the start of the second half that saw them land an unanswered 4-4 saw a dominant St Mary’s Kiltoghert sweep to an easy victory over Rinn Gaels in the Westlink Coaches U15 League Division 2 Final.

Anyone watching the first half in Avant Money Pairc Sean Mac Diarmada would not have expected the final scoreline as Rinn Gaels battled a wasteful St Mary’s with chances at both ends going abegging.

However, four goals in the first eight minutes of the second half turned this game into a rout as a shell shocked Bornacoola & Gortletteragh outfit couldn’t cope with the constant pressure on their backline. Credit Rinn Gaels, however, who grabbed three consolation goals in the final ten minutes but the match was long gone at that stage.

Donnacha Glancy opened the scoring for St Mary’s on five minutes but the next minute saw a goal at either end. Kealan Lyons' long range shot went off the hands of keeper Charlie McDermott and into the net but Mary’s hit back when Oran Butler turned Richie Gavican’s shot into the net from close range.

St Mary’s were missing a host of chances but a Glancy point and a goal from Gavican after a Butler free broke loose in front of goal put them in command. Daragh Boyle fired over two points and Gavican added another as St Mary’s were threatening to run away with the game.

But Rinn gave themselves some hope when Padraig Niblock goaled, the Gaels player winning a free that should have been a penalty, but then took off on a run to fire the free to the net. And when keeper Daire McGirl made good saves to deny Glancy and Gavigan goals, it stayed 2-5 to 2-0 at the break.

The early minutes of the second half were traumatic for Rinn - McGirl made a good save from Aaron Gibney but when sub Rian Costello was fouled in the action of shooting, a penalty was awarded, converted by Donnacha Glancy, while Rinn also lost Kian McCormack who was injured in the goal.

Glancy added a free before Mary’s hit three goals in as many minutes from Gibney (2) and Boyle to completely kill off the game. Two points each from Butler and Gibney followed before Aaron Keighran ended Rinn Gaels’ famine with a good point on 44 minutes.

Corner-back Nathan Casey fired over before Conor Duignan soloed through to score a good goal on 46 minutes. Butler hit two more points and then Richie Gavican produced a lovely chip over the keeper after a great pass from Butler.

Hard to pick one player out on a day when St Mary's were so dominant - James Reynolds, Nathan Casey, Conor Duignan, Aaron Gibney, Donnacha Glancy and sub Rian Costello stood out but when the game was tight, I thought Darragh Boyle was outstanding as was Rinn Gaels keeper Daire McGirl who made a series of excellent stops while John McGarry, Ultan McNulty, Kealan Lyons and Conor Reynolds showed flashes of class.