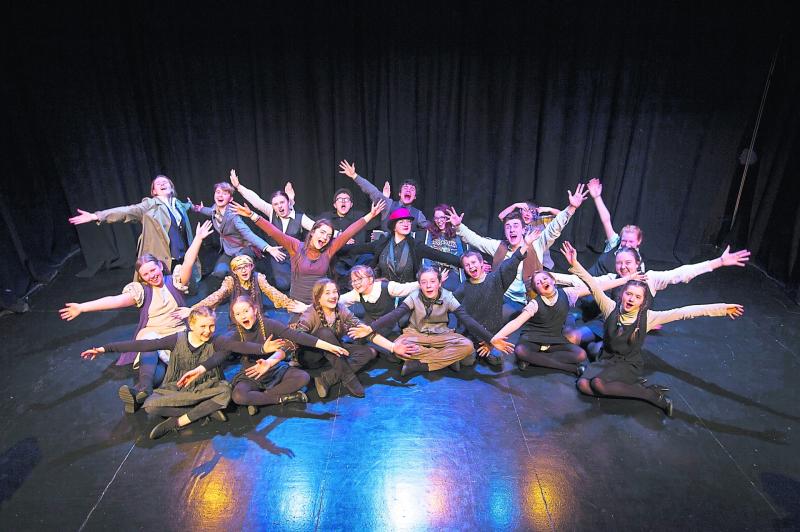 Across the Lines: Leitrim and Fermanagh youth actors join forces to tell story of much loved local rail service

Anew play written especially by well-known playwright and writer Carlo Gebler for youth drama groups in north Leitrim and Fermanagh, focusing on the closure of the SLNC Railway, had its first performance on Saturday, March 30 in the Glens Centre, Manorhamilton.

Sligo Leitrim & Northern Counties Railway, an entertainment that goes A-Z but not in that order, explores the impact on communities from the closure of the much-loved cross border transport route in the late 1950’s.
Drawing on research and stories gathered by the young people involved, it was developed as part of Across the Lines, a cross border cross community programme focusing on the arts and creativity funded by the International Fund for Ireland under its Peace Impact Programme.

The drama’s second performance took place in the Ardhowen Theatre, Enniskillen on Sunday, March 31.
The cast of 32 young people was drawn from three drama groups from both sides of the border – Manorhamilton’s junior and senior youth theatre groups as well as The Unit, a cross community youth drama group from Fermanagh.
Under the guidance of their drama leaders, Tori Lee, Declan Drohan and Sally Rees, the drama has been in development since last summer, in collaboration with the Fermanagh based playwright and Belfast based Kabosh Theatre Company and its director, Paula McFettridge.

Speaking prior to the opening performance Bernie Butler, board member International Fund for Ireland congratulated everyone involved in bringing the drama to the stage.
“The Fund is committed to delivering real and positive transformation in communities through the Peace Impact Programme and this drama and the wider Across the Lines project typify the positive change we seek to foster and encourage.
“It has highlighted the positive results that can be achieved through cross border and cross community collaboration. By exploring the connections lost between communities along the border through the closure of this railway line, this drama has facilitated the creation of new connections and the learning of new skills.

“It has also led to a deeper understanding of the shared history of these communities and the social impact on communities on both sides of the border, following the loss of this key transportation route in the North West,” she said.
“The drama is one of a number of projects that have been undertaken by the North Leitrim Glens Development Company as part of the Across the Lines project, the cross border cross community programme funded by IFI to address the deficit of community participation in local development.

The two-year programme, which is nearing completion, was designed to help improve individual quality of life, and support the building of inclusive communities along and across the Leitrim/Fermanagh border through engaging individuals in a number of participatory art projects, capacity building and skills development initiatives. Specific and targeted initiatives for women, men, young people, adults, as well as a number of inter-generat- ional opportunities were included.
Catherine Ryan, programme manager, International Fund for Ireland said the project had helped to address the legacy of conflict as well as the social and economic realities facing many rural communities today, such as isolation and youth emigration, along with the uncertainties of Brexit.

“In particular, the project has helped to increase people’s involvement in their local community and encouraged them to explore the differences and similarities of living in different states but only a few miles apart.
Ruth Gonsalves Moore, project co-ordinator thanked the International Fund for Ireland for its generous support.
“Across the lines addresses the negative impacts of the conflict in and about Northern Ireland, which hindered and interfered with community relationships.
“The initiatives we have undertaken have helped to rejuvenate cross community relationships and by extension, this cross border community.
“For a rural area with a history of outward migration of young people who never return, the importance of projects that foster a deeper understanding of and appreciation for their local community among the young people can never be overstated.”