Still looking for a fright? Watch a classic horror at The Dock 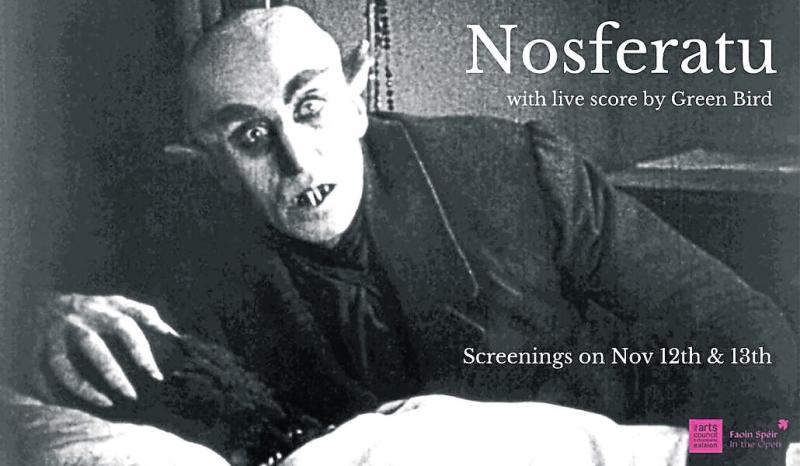 Still looking for a fright? Watch a calssic horror at The Dock

As winter draws in and with it the darkness, The Dock has a very special treat for fans of classic horror.
They are screening the classic 1922 film Nosferatu over two nights on November 12 and 13 with a live original score performed by local alt-folk band Greenbird.

The screening will be in the new outdoor covered area at the rear of the building and yes, there will be heaters as well as hot drinks available! The event is made possible with funding from The Arts Council’s Faoin Spéir/In The Open initiative.
GreenBird use piano, fiddle and voice along with some flute, looped percussion, and sound effects that they create in real-time.

The eerie atmosphere of this movie inspired Mark, Cliodhna, and Mandi to create music that can at times be a bit scary, but the result is beautiful, accessible, and great fun. They have performed soundtracks to other silent films in the past few years, including twice at the Blackrock film festival in Louth and also previously in the Dock.
“Its hard to categorize this music but we feel it is true to the tradition of musical accompaniment to silent films and also to our own diverse backgrounds in many different music including folk and jazz.

“It's a great film and we try to ensure that the music score matches up with the on screen action which is always at the centre of things. There are also many improvised elements in the performance which ensure that each performance will be unique, enjoyable and hopefully memorable."
The film itself was made in Germany in 1922 and has received overwhelmingly positive reviews over the years. It’s been described as "One of the silent era's most influential masterpieces, Nosferatu's eerie, gothic feel - and a chilling performance from Max Schreck as the vampire - set the template for the horror films that followed." It was ranked twenty-first in Empire  magazine's "The 100 Best Films of World Cinema" in 2010.

The original score was composed by  Hans Erdmann to be performed by an orchestra during screenings. It is also said that the original music was recorded during a screening of the film.
However, most of the score has been lost, and what remains is only a reconstitution of the score as it was played in 1922.
Thus, throughout the history of  Nosferatu screenings, many composers and musicians have written or improvised their own soundtrack to accompany the film as is the case with the screening at The Dock.
Join us for a great night out and be terrified by one of the all-time silent horror movie classics!