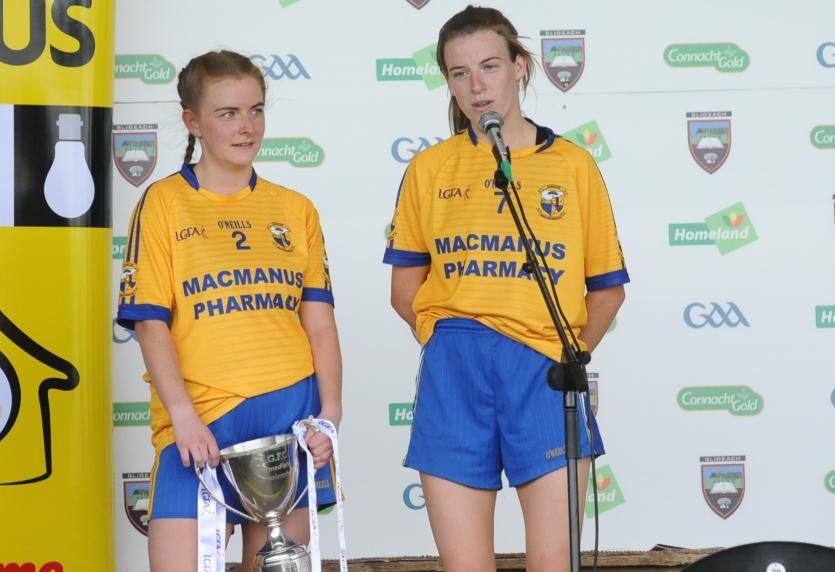 She might have protested that she wasn’t good with interviews but joint captain Rebecca Rooney pretty effortlessly summed up just what Saturday’s Connacht LGFA Intermediate Club Final victory means to the footballers of Glencar/Manorhamilton.

“Thrilled, delighted, it was a massive, huge team effort,” Rebecca told the Observer after the 3-15 to 1-12 victory over Geevagh in Markievicz Park, “Just the girls went out and showed what we are made of.”

The long wait to play the final after it was postponed last October may have made the victory all that sweeter: “Just after such a long time, we are so delighted to get to play it and when we did, we wanted to show what we’re made of because, Jesus, it was a massive team effort, huge performances all round. We’re delighted.”

GALLERY: All the pictures from Glencar/Manorhamilton's historic day

Joint captain with Eimear Feely, Rebecca highlighted the impact of the Manor forwards on the game: “Our defence, we work as a unit but sure the forwards we have, they are just outstanding. We’re just there to hold it at the back and they’ll do the business up the front and let them at it, we’re just delighted, delighted.”

However, there was never any chance that Glencar/Manor were going to relax because they knew what Geevagh are capable of: “You can never write off Geevagh, we knew they were going to come back at us and they did in that last 15 minutes. That last quarter, we were expecting them to come back and they did but look, we got over the line at the end of the day so we’re happy.”

LISTEN: A dream come true for a delighted Cammie McPartland

LISTEN: Player of the Match award for outstanding Leah Fox

Looking ahead, Rebecca hopes that the victory will inspire future players: “Manor, it just shows what we’re made of. It will help bring on football for even younger girls, for all the girls in the club and it really puts us on the map as a proper good team. We are good, we know we’re good and today we finally proved it.

“We weren’t going to let this pass us by, we were determined to win and thank God we did, it went our way but no, we’re ready for next year again and here goes the Leitrim championship again, we’re looking forward to it.”

Finally, asked if she was going to have a good celebration, all Rebecca said was “Ah, don’t you worry, I will.”