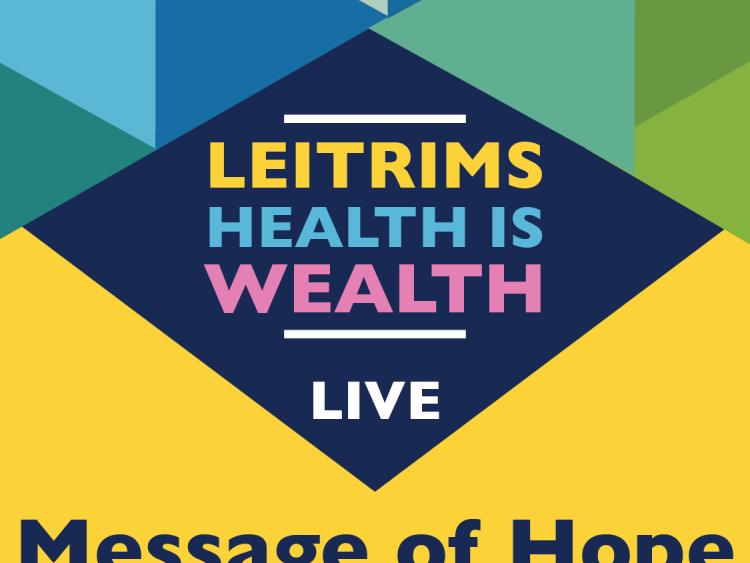 Following on from the phenomenal success of the Leitrim's Health Is Wealth event, organisers, Hubert McHugh and Valerie Cogan, have confirmed details of the line-up for a new virtual event. The free event is planned for May 26th next and will be live streamed straight to your home from the ManorHUB in Manorhamilton, Co. Leitrim.

The event in 2020 was to be the last Leitrim’s Health is Wealth, however after several approaches from people within the community, it was felt there was a greater need than ever to create a sense of hope and solidarity. There has been lots of data recently which has shown that peoples mental health has been severely impacted by depression, stress, loneliness and isolation.

The world is a very different place since February 2020 when the last event was held in the packed out Landmark Hotel. The global pandemic has changed everybody’s lives in ways that we never thought was possible. While Leitrim’s Health is Wealth has always tried to deliver a message of hope to people struggling with mental health issues this year above any other we all need to be given a message of hope.

The event moderator is investigative journalist and author, Paul Williams who gave a powerful testimonial after last year’s event, calling it, “one of the most impressive, enriching and indeed well-organised conferences I have ever attended… it brought comfort, reassurance and most importantly, hope to the carers, loved ones and sufferers alike. The powerful message from that emotional night to those suffering with mental health issues was that you are not alone”.

Speaking at last year’s conference, both Hubert McHugh and Valerie Cogan stated that when they started with Leitrim’s Health is Wealth in 2017, their aim was to start a conversation around mental health issues in order to try and reduce stigma associated with it and to try and encourage people to believe that it was ok not to be ok and it was ok to look for help. As with every county in Ireland, the suicide rate is too high. They wanted their message to resonate with the everyday ordinary person on the street. They have always wanted this event to be accessible to all and this year is no different.

Speakers at this event will include

Leitrim’s Health is Wealth is run in association with the Leitrim Observer, Breffni Mental Health Association, Janssen, Strandum, Healthy Leitrim, Leitrim Development Company and the Leitrim Board of the GAA.