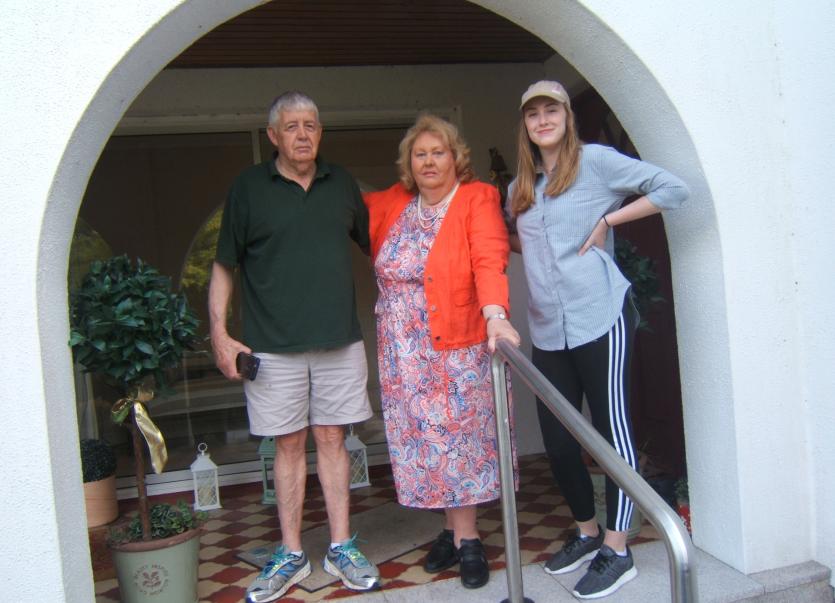 The late Pat Blessing with his sister Ada and daughter Olwen

Patrick J. Blessing, son of the late John and Ada Blessing, Dublin, died recently at his home in North Carolina, USA. His father, John, was born in Acres, Aughavas, Co Leitrim and served as a member of An Garda Síochána in Dublin.
Pat inherited a great love for the family roots in Leitrim. Every visit to Ireland included a visit to Leitrim. As a teenager, he spent much of his school holidays in Acres helping his Uncle Pat on the farm and keeping abreast of the price of cattle.

Pat’s last visit to Leitrim was in 2017 when he brought his beloved daughter, Olwen, to experience her heritage. He walked the farm again and was impressed with the progress and improvements in the interim. He was most impressed with the lovely, newly-built house and was full of praise for the “man of the house,” his cousin, John. They, too, will miss his visits but his daughter, Olwen, promises to keep up contact. Indeed, she will always remember the great welcome they received.
By his sister, Ada Callanan

Pat immigrated from Ireland to America in 1957 in search of a future. In the summer of 1958, he bicycled from California to New York for, in his words, “something to do.” In 1959 he was drafted, opting to enlist in the Marine Corps, and served several tours of duty in the Far East and Vietnam. Most notably, as company commander of Echo Company, 5th Marines, 1st Marine Division, he led his troops into battle at Operation Newcastle (March 23, 1967) and Operation Union II (June 2, 1967). 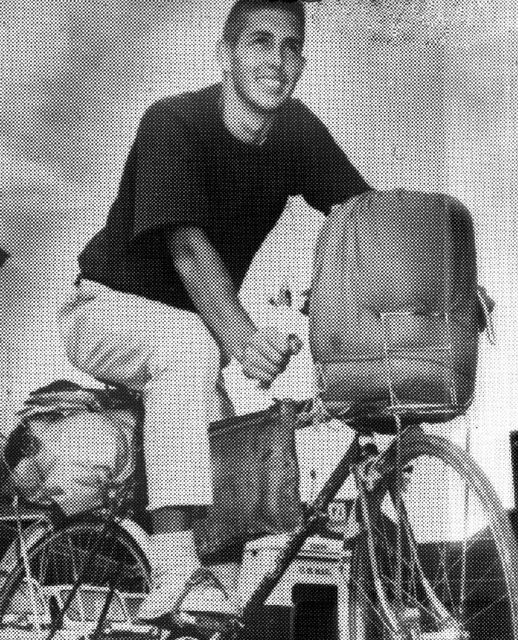 Pat Blessing on his bicycle that he cycled across America.

Of this experience, he would later write the following: “Deeply embedded in my brain is the image of young Americans, somewhere in the world and against all odds, unafraid to commit themselves for their fellow Marines, for a cause, and for their country. I thank all of you who served; you made it possible for me to come home. Hardly a day goes by that I don’t think of E 2/5 and of being part of a team that could do anything and go anywhere – all we needed was enough ammo and water – and a weapon that would shoot.”

After the war he resumed his education, eventually earning a Ph.D. in U.S. History at UCLA, while continuing in the Marine Corps Reserve. Among other accomplishments as a reservist, he was on the faculty at the Marine Corps University at Quantico. He was called back onto active duty during the Gulf War, serving as editor of the Marine Corps Battle Assessment.

His civilian academic career was equally distinguished. He taught at the University of Tulsa and at Harvard University as a Warren Fellow; he is best known for his published work on Irish immigration to America, especially his contribution to the Harvard Encyclopaedia of American Ethnic Groups (1980). At the time of his death he was completing a multi-volume study on the transformation of the U.S. presidency since Reagan.

He is preceded in death by his beloved father, mother, sister, and many fellow Marines who made the ultimate sacrifice. Pat leaves behind his wife, Callie Williamson, daughter Olwen Blessing, and son John Blessing; brothers Kevin, John, and Peter of Dublin, and sister Ada of Craughwell, Co Galway. He also leaves several nieces, nephews, and cousins and many friends both in America and abroad. He will be buried with full military honours at Quantico National Cemetery at a date to be determined.
In lieu of flowers, donations can be made in his honour to the Spaulding Family Resource Center in Spring Hope, North Carolina.

Those who knew and loved Pat Blessing will remember a man who fought his entire life for what was important to him: for his family, for his troops, for the people, and for a better future for America, the land of opportunity.