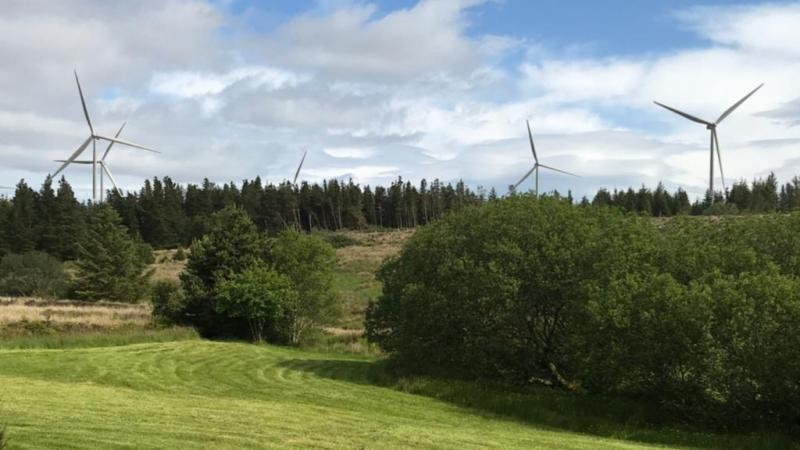 A digital mock-up of how the view in the area would be altered with the development of wind turbines. The giant turbines would be significantly bigger than those in this image

Two prominent experts will address a public meeting on Thursday, September 12 in The Clubhouse, Dromahair at 7pm to discuss the proposed Croagh windfarm.

Professor Alun Evans, a public health specialist at Queens' University Belfast will address the meeting on the health hazards from turbines.

The meeting will also hear from Dr Paula Byrne, coordinator Wind Aware Ireland, along with representatives from groups campaigning against wind farms and experts on the environmental impact and alternative energy sources.

Organisers are urging the local community to attend and have also issued an invitation to local Councillors, TDs and MEPs.
Residents in the areas that would be directly impacted should the proposed development be given the go-ahead say the public meeting is “the start of the fightback; the counter-narrative.”

An area of particular frustration for residents has been the manner in which Coillte have dealt with them to date saying it is a case of “money and power versus lack of money and lack of power.”

They say they have been left in the dark when seeking answers saying: “We never get answers in writing from Coillte. It's not meaningful engagement, it's superficial.” One positive to come from news of the proposed development is a renewed sense of community spirit with resident Eric Carling saying: “If anything good has come from this it is that we have got to know our neighbours a lot better,” adding, “this area should be designated as an area of outstanding natural beauty.”