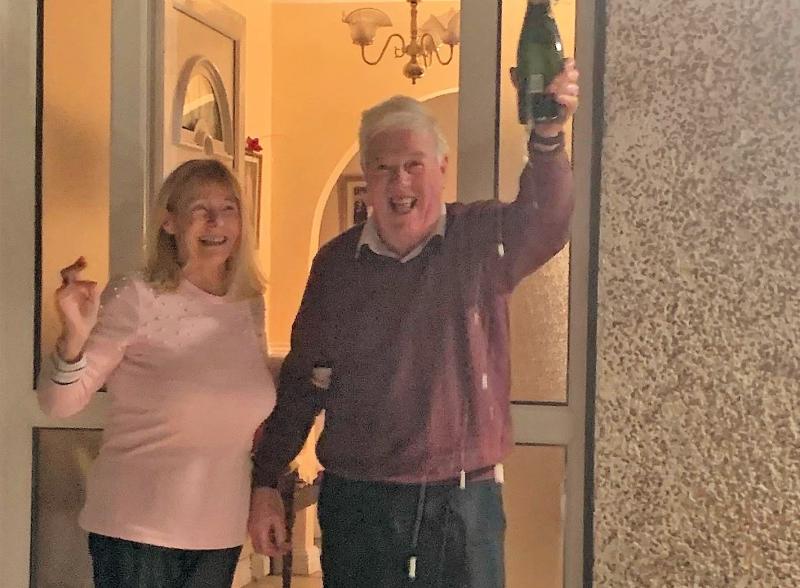 A Sligo couple were celebrating a huge windfall on Sunday evening after they won the top prize in the Shannon Gaels & Curry GAA Club's Win a House in Sligo when the draw was held online.

In the socially distanced draw independently observed by BDO Ireland and broadcast live on YouTube, Paddy and Anne Henry, from Sligo won a KDM Construction built house in Sligo worth €340,000. The fundraiser, jointly organised by Curry GAA club from Sligo and Shannon Gaels GAA club from Roscommon, was launched in July 2021.

Paddy Henry would be very well known in Sligo GAA and LGFA circles, having led the Yeatswomen to an All-Ireland Junior Championship success in 2006 as well as Connacht Intermediate titles.

In a draw event held in Sligo Park Hotel the winning ticket was pulled out of the draw drum by Sligo Senior Football Captain Keelan Cawley.

Speaking on behalf of Win a House in Sligo, Barry Gallagher, Chairperson of Curry GAA said "Congratulations to Paddy and Anne Henry from Sligo on winning the incredible top prize of a luxury home in Sligo located in Farmhill Manor on the Strandhill Road or €300,000 in cash if they so prefer. Thank you to all our entrants for supporting the two clubs through this fundraiser.

"This is a fantastic result for our two clubs delivering over €800,000 profit to be split evenly between the two clubs. This draw is a massive boost to our two rural GAA clubs and will support the development of pitch and training facilities in the two communities.

"On behalf of everyone at Win a House in Sligo, I would like to sincerely thank everyone who supported this fundraiser by either purchasing a ticket or becoming a sponsor. I would like to thank our steering committee and direct sales teams for their stellar work throughout the campaign and finally I’d like to acknowledge the massive support of Colm Kelly and Michael Durcan and the team at KDM Construction Ltd, without whom none of this would have been possible”.

Colm Kelly, Chairperson of Shannon Gaels said “We are very appreciative of all the support we received from our local communities and neighbours as well as nationally and across the world. We thank all our sponsors and business partners who have helped to promote this campaign, and who have contributed financially to the success of this draw.

"We especially thank FRS for coming in as our GOLD SPONSOR. We also thank those businesses that have sponsored prizes for our bonus draws along the way. We thank the Sligo Park for facilitating our draw and our solicitor Dara O Callaghan for his assistance throughout. We thank Colm Hanratty and SixTwo Digital for assisting with the WAHIS campaign.

"We thank David O’Carroll of BrandNeue for his great digital expertise and support. We thank David Leydon and Pat Compton from Club Rossie for their help throughout and we thank BDO for independently observing our draw. Finally, the fully voluntary Win a House in Sligo committee and sales teams, who receive no pay or expenses, deserve a very special mention for their incredible efforts in this fundraiser.”