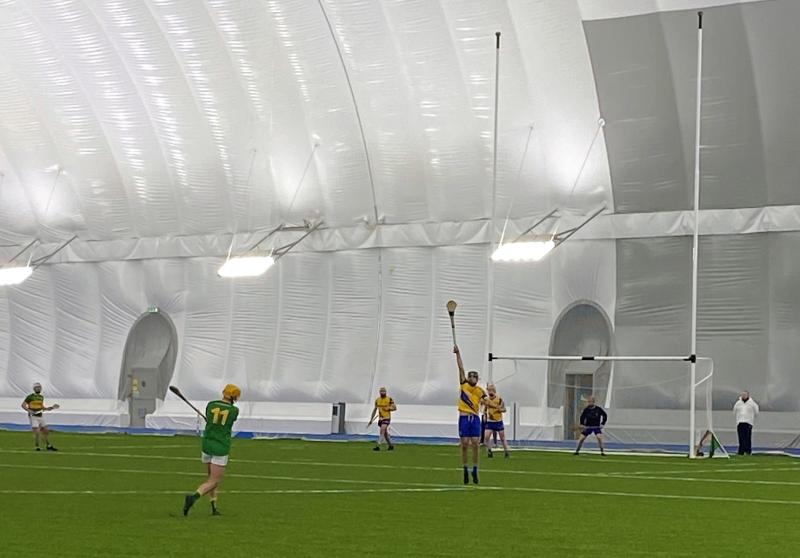 Brendan Delaney scores a point for Leitrim against Roscommon on Wednesday

It might feel like a missed chances but there enough positive signs for Leitrim hurlers on Wednesday evening in the Connacht Hurling League in the NUI Galway Air Dome to suggest that Olcan Conway's side are heading for a good season in 2022.

A sloppy injury time goal gave Roscommon a three point victory mere seconds after a battling Green & Gold side had drawn level thanks a penalty from new recruit Joe Murray but up against a Roscommon side who play their championship hurling in the Christy Ring Cup, this was a performance that Leitrim can draw plenty of positives from ahead of the start of the Allianz Leagues.

Without Stephen Goldrick and Gavin O'Hagan, a poor start cost Conway's side as they trailed by eight points after 12 minutes but they fought back in the second half, getting to grips with Roscommon's pace and superior stickwork to cut the gap to a point at one stage.

When they look back on this game, missed chances will loom large - a missed penalty from the otherwise excellent Brendan Delaney just before the second water break that would have put them in front and a saved James McNabola effort six minutes from time were glorious chances that could have put Leitrim in front.

However, with new faces in Delaney, Sean Markham and Joe Murray, Leitrim looked strong, fit and well motivated and it is doubtful they will meet anyone as good as Roscommon in Division 3B of the Allianz League.

Leitrim play Mayo in the Connacht Shield Final on Friday night, January 21, in the NUI Galway Connacht GAA Air Dome at 6pm with the first round of the Allianz NHL away to Lancashire on Sunday February 6.

Roscommon got off to a blistering start with goal after just 40 seconds when Ben McGahon played Ben Mulry in for a tidy finish to the net. Mickey Joe Egan tagged on a point before Brendan Delaney opened Leitrim’s account with a second minute free.

However, Roscommon’s blistering start continued when Egan burst through the centre and finished high to the Leitrim net on four minutes to leave them six points clear after just four minutes.

Leitrim tried to hit back but Sean Markham was denied a goal by a great save from Roscommon keeper Enda Lawless with Joe Murray’s follow-up going wide. Two frees fells short while James McNabola lost the ball as he charged in towards goal.

Worries about the height of the roof on the fabulous NUI Galway Air Dome proved unfounded but the one ball that did hit the roof had an unexpected benefit for Leitrim as Naos Connaughton’s shot was definitely on target before it hit the roof before dropping inches wide!

Conor Cosgrove intercepted a Leitrim move to point from distance and Eoin Fitzgerald added another as Roscommon now led by eight points. But three Delaney frees settled Leitrim and despite two more Roscommon points for Mulroy & Fitzgerald, Leitrim were looking much more composed.

The water break proved a benefit as immediately on the restart, Joe Murray took the ball at speed and sped by his man before delivering the sliothar low to the Roscommon net. It was just the tonic Leitrim need but Roscommon responded impressively, outsourcing Leitrim five points to four before halftime.

Conor Dolan landed all five of Roscommon’s points, one from a free, with Delany hitting three, one from play, and Karl McDermott converting a free to leave Leitrim trailing 1-8 to 2-10 at the break.

If Roscommon got the good start in the first half, Leitrim got it in the second with Martin Feeney’s high delivery on two minutes being pounced upon by James McNabola, the Eslin man firing to the net to leave just two points between the sides.

It became tit for tat with Conor Dolan virtually holding Leitrim at bay as he responded from placed balls and play to scores from Sean Markham, Delaney (two frees) and James McNabola (2), one of the Eslin man’s shot being tipped over the bar by superb keeper Enda Lawless.

Leitrim had a glorious chance to grab the lead just before the water break when Delaney was taken down by full-back Peter Kellehan but unfortunately, Delaney drove the ball wide.

After the water break, Roscommon seemingly took control once more with Dolan and sub Mickey Lohan extending their lead to four points before Karl McDermott fired over.

Enda Lawless came to Roscommon’s rescue six minutes from time when the Meelick Eyrecourt man made a superb save from Leitrim sub Shane Crowe. At the other end, Michael O’Brien saved a shot from Dolan with Dolan and McNabola swapping points.

With the gap at three points and the game in the final minute, Joe Murray broke through once more but was taken down with Roscommon’s Ronan Kilcline sent to the bin. Murray dusted himself off and drove the penalty to the net to tie the scores.

But just as Leitrim were dreaming of a famous, famous win, disaster struck when Michael O’Brien misjudged a high ball into the area, the sliothar eventually arriving in the hands of Roscommon Adam Donnelly who blasted to the net from close range.

Leitrim kept battling, Karl McDermott firing over to cut the gap back to two but Donnelly added a point to seal Roscommon’s passage to Saturday’s Final against Sligo.