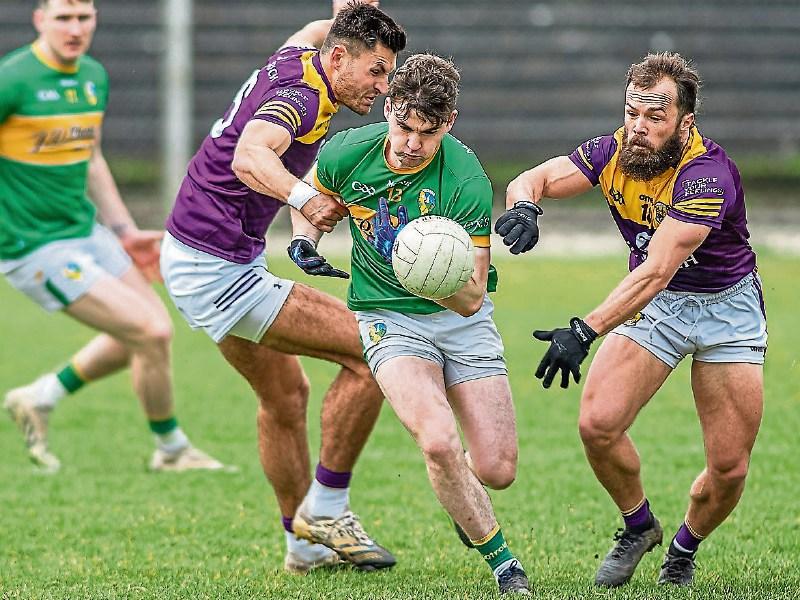 Leitrim certainly had to dig deep at the end, and be very competitive throughout, to successfully see off the challenge of a spirited Wexford side in Sunday's highly entraining Allianz Division 4 clash in Avant Money Pairc Sean Mac Diarmada.

Leitrim kept their slim, if fading, promotion hopes alive for the final week of the League as they had to fight very hard against a Wexford team who belied their poor League position and almost caused a huge upset last Sunday.

Manager Andy Moran can take a large slice of the credit for the victory as the decision to introduce sub Jack Heslin, who scored a point to put Leitrim ahead, and Conor Cullen who grabbed the decisive goal in added time, proved to be inspired match winning choices.

However, the Leitrim manager will be less pleased by his team’s inaccuracy as the home team shot 11 wides, eight in the first half, compared to Wexford’s six but Moran will be pleased, however, that when the game was there to be won, Leitrim found the clinical edge to seal victory.

Leitrim go into the final game with their fate out of their hands - if Tipperary win, there is nothing Leitrim or Sligo can do but if the Munster men lose, then the Markievicz Park showdown would be a winner takes all encounter with the victor going up.

Cavan have one foot in the final and will confirm their place in it if they avoid defeat next Saturday but if they were to lose their final home game against Waterford, they could still end up outside the top two with a frankly unlikely series of results. 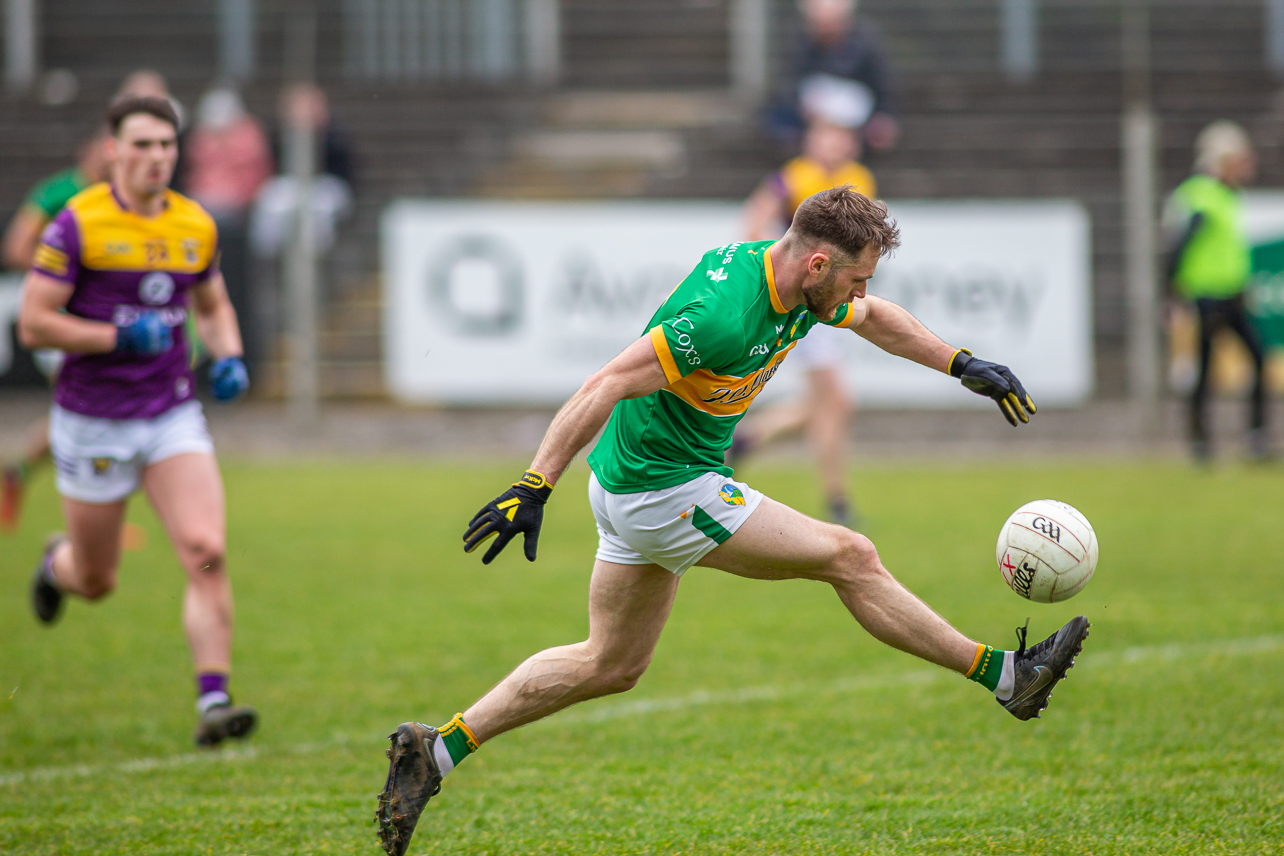 Wexford started brightly and Niall Hughes put them ahead when he fired over a first minute point. A minute later Leitrim's Conor Farrell saw yellow as the Slaneysiders continued to put the home side under pressure and Leitrim had a let off when Wexford failed to convert a clear cut third minute goal chance.

Shane Moran, in his first start of the year, drove a Leitrim goal chance inches wide before a Keith Beirne point on 14 minutes got the home side on level terms. Leitrim took the lead for the first time in the game some eight minutes later when Davis Bruen fired over a well-hit long range point.

Leitrim’s advantage was further stretched when Darragh Rooney hammered home a goal almost immediately. Wexford, who hadn't scored for 22 minutes kept themselves in the hunt with Tom Byrne points before the interval. Keith Beirne from a free and Wexford's Donal Shanley from play traded points at opposite ends to leave the home side leading by 1-4 to 0-4 at half-time.

After the restart, Wexford narrowed the gap when Robbie Brooks shot over but over the next four minutes Leitrim increased their advantage with points from Mark Plunkett and Ryan O'Rourke.

However Wexford upped the game and cut Leitrim's lead to the minimum by the 41st minute after Martin O'Connor drove almost unchallenged through the home side's rearguard to fire home a goal that gave keeper Darren Maxwell no chance between the posts. 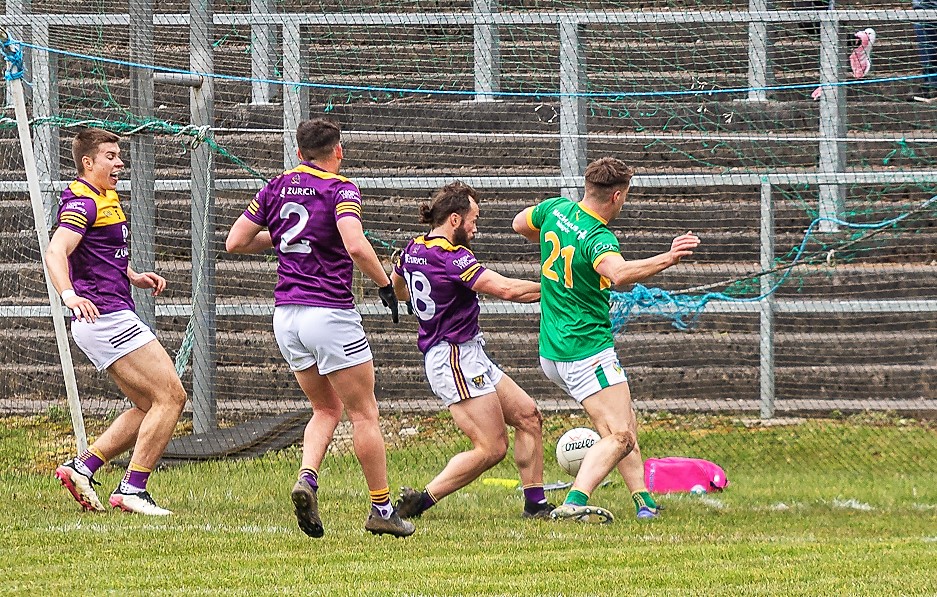 Keith Beirne restored Leitrim's two point advantage when he shot over a minute later but Wexford rallied and were on level terms by the 49th minute after centre forward Donal Shanley hit over a pair of points in quick succession.

Tom Byrne put Wexford ahead a minute later when he split the Leitrim posts and turned the tide in the contest back in his side's favour. But Leitrim regained control within the space of three more minutes after Ryan O'Rourke shot to the Wexford net and put the home side back in front.

Once again and in the following minute, Tom Byrne came back to land a Wexford point to leave the Slaneysiders trailing by just trailing a single point. The game was now poised on a knife edge. Neither side scored for the next 13 minutes of the action and both sets of supporters, but mostly from Leitrim, were definitely on the sides of their seats for this tense period of the game.

Ryan O'Rourke eventually turned the tide in Leitrim's favour when he fired over a 63rd minute point after great work with Keith Beirne. At this stage of the action, O'Rourke and Beirne were operating in a two man Leitrim full forward line.

Wexford reduced Leitrim's advantage to the minimum when Rossiter replied with a point some 60 seconds later but then followed six minutes without a score before sub Jack Heslin hit a point after good support from teammates.

Wexford came back three minutes later to close the gap to the minimum again when Ben Brosnan put over a 72nd minute 13 metre free.

Leitrim answered with a well-taken Conor Cullen goal a minute later, again after some more good support by his upfront team mates. A four point win was confirmed when the final whistle blew following the Wexford kickout to complete Leitrim's home league schedule.