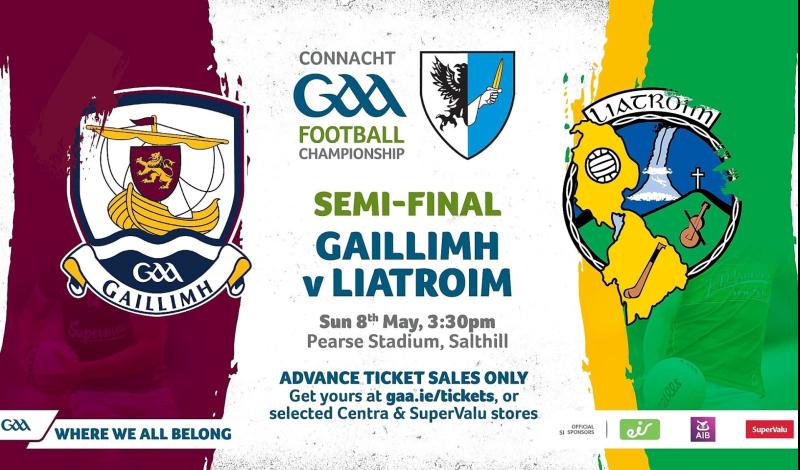 Leitrim fans have been urged to get their tickets for Sunday's highly anticipated Connacht Senior Championship Semi-Final against Galway as Green & Gold manager Andy Moran wants his players to show what they are capable of against the presumptive favourites.

Tickets for the game are on sale through Ticketmaster.com with stand tickets costing €30 for adults in the stand and €25 for students & OAPs while terrace tickets cost €25 for adults, €20 for students/OAPs with juvenile tickets €5.

The general view may be that Leitrim have nothing to lose next Sunday when they take on Galway in Pearse Stadium in the Connacht Senior Championship Semi-Final as the Tribesmen dethroned 2021 champions Mayo last Sunday week while Leitrim achieved their main priority by overcoming a ferocious challenge from London in Ruislip and many are predicting an easy passage to the Provincial Final for Padraic Joyce’s side.

So favoured are the Tribesmen that many are wondering if Leitrim have ‘nothing to lose’ but the Leitrim manager is adamant his players can put on a show in Salthill: “Of course when a Division 4 team goes playing a Division 1 team, it is that 'nothing to lose' scenario but we have stated, and I’ve been very open about saying it, but we have very talented players within our group, we’ve got players that I feel can play at a higher level.

In fact, the Leitrim manager believes both teams came through very similar challenges in their first round games: “There was huge pressure on the London game, two division 4 teams going at it and you’re on about ‘winner takes all’ scenarios. The London game was that pressure game for us, similar to what Galway faced against Mayo. Both teams will be looking at it very differently heading into Sunday but it is something to be looking forward to.”

The winners of Sunday's semi final will take on Roscommon after Anthony Cunningham's men had a comfortable 0-23 to 0-11 victory over Sligo last Saturday in Markievicz Park, the Connacht Final take place on Sunday May 29.