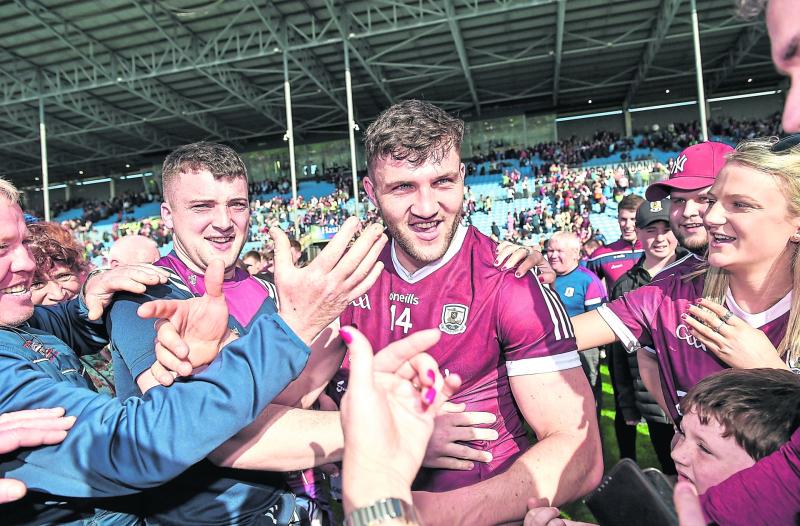 Damian Comer is congratulated by family and supporters after the game in the Connacht Senior Championship Quarter-Final match between Mayo and Galway at MacHale Park Picture: Ray Ryan Sportsfile

There's always been something different about Galway and for the life of me, I've never been able to figure out what it is. I've been waiting for the sleeping giant that is Galway football to awaken and shock the Gaelic games world for the guts of ten or more years and it still hasn't happened.

But maybe, just maybe, the giant is starting to stir - the scenes that greeted their dethroning of Mayo in Hastings Insurance Mac Hale Park last Sunday week were something you'd expect from delirious Leitrim fans or our good neighbours across the Shannon but not from Connacht's kingpins.

The large travelling support that made it's way to cheer on Galway in Castlebar seems like an outlier - far easier to remember days like the Galway County Board returning tickets for the cursed first ever televised Connacht game in 1995 in Pairc Sean Mac Diarmada, a game that saw the Tribesmen stage a late smash and grab raid to dethrone John O'Mahony's team.

O'Mahony knew the potential that was bubbling under the surface in Galway - Leitrim played them often enough in those days, games that were epic clashes decided more often than not by a last minute point, and even in 1994 and 1995, Leitrim fans were beginning to hear of outrageous talents like Padraic Joyce and Michael Donnellan emerging with their Minor team.

That game was the first inkling of what was to come as O'Mahony guided Galway to the Sam Maguire later than year. Leitrim showed more of what they were capable of two years later to reach the Connacht Final where O'Mahony & Galway again prevailed and Sam crossed the Shannon once more in 2001 in a glorious era for Galway.

That fabulous team of Joyce, Donnellan, Kevin Walsh, Declan Meehan, Ja Fallon and so many others remains the last Connacht team to win the All-Ireland - a team for the ages that can stand comparison with the best there has ever been.

Mayo fans, for all the sustained excellence of the men in Green & Red in their fanatical pursuit of the Holy Grail that is the Sam Maguire over the last 15 years, must look at their neighbours and wonder what if? What if, you ask? They lost to Galway by just a point a little over two weeks ago and almost sent a game where they played second fiddle for long periods to extra-time and nobody, but nobody would have betted against James Horan's side at that stage.

No, Mayo's 'what if' is somewhat more wistful, even more melancholy for when they look at the attacking talents in the Galway ranks, there had to be a little envy as they wonder what they might have achieved over the last ten years if they had someone of the calibre of Damian Comer wearing the red & green of Mayo rather that the Tribe's Maroon!

I'd go so far as to suggest that if Comer or Shane Walsh or Paul Conroy had been born across the border, then Mayo would have ended the most famous famine in Irish sport a couple of times over by now - and that's not even mentioning young Rob Finnerty, son of Mayo great Anthony!

When we think of that great Galway team of the late nineties, early noughties, it is their forward talents that shine brightest in our memories and I have no hesitation in saying that witnessing Padraic Joyce in action up close was an education all in itself. The current Galway manager is the single best player I've witnessed from this province in the past 30 years and yes, that includes all the Mayo greats of the past decade.

Joyce was an artist who had a spine of steel to his game and his battles with John McKeon in the early nineties were legendary. He tormented Leitrim early on but the Drumreilly man was good stuff too, holding Joyce as the years went on but even in those later, less successful years with Galway, Joyce's awareness, vision and sheer desire to win stood out like a beacon during some black days.

Galway supporters must pine for those days but down through the years, through Michael Donnellan, Michael Meehan and Sean Armstrong, the Tribesmen never have had any problems in producing quality forwards their neighbours would die for. In Walsh, Conroy and Comer, Joyce can boast three players who are worthy successors to the legions of legendary Galway footballers going all the way back to Purcell and Stockwell.

That's why Galway footballers and their counterparts in Cork remain the great enigmas of the gaelic footballing world. For years, they lagged behind their more successful neighbours in Mayo and Kerry who lacked the sheer numbers both can boast but possess an organisation and a hard edge that our two wayward sons have always struggled to match.

I've seen legions of superb underage footballers from Galway disappear without trace, never to be heard from again - a complaint often heard about the Munster men. Every county suffers a bit from that affliction in Galway and Cork, it seems a terminal disease.

In terms of population, playing and financial resources, both dwarf their more successful neighbours and some part of me wonders if hurling and competition from other sports that comes with bigger populations has robbed Galway and Cork of the sheer bloody minded desire to conquer the Gaelic Football world.

Dublin suffered from that peculiar affliction for so many years - a huge population and hordes of players made it easier to chop and change and counter attractions were often brighter but getting the right structures in place can solve a lot of those problems. A few big wins helps too - just look at what winning the All-Ireland Minor title did for Roscommon way back in 2006.

Speaking of the Rossies, they are now safely in the Connacht Final and they are the one team that absolutely relishes playing the Tribesmen. Each county has one team they always think they can beat, no matter what the formbook says at any particular time and Galway are the team Roscommon love to see coming.

Anthony Cunningham's side have beaten Galway twice already this year and you wouldn't put any money against them making it a treble should they meet in a Provincial final, although there is a sneaking suspicion that Joyce might have been holding something back in those League encounters with their full attention on the championship.

Roscommon will be licking their lips at the thought of taking on the winners of next Sunday's clash in Pearse Stadium and they very definitely have a hard edge to them. It will be interesting to see if Galway can reproduce that hard edge that saw them through the tempest in Castlebar because that has been the one thing lacking over the years for the Tribe.

Fantastic skills, imposing physical specimens and speed to burn - Galway have all the physical attributes to compete and win at the top level but their failings have been more cerebral than anything else. Kevin Walsh tried to address that but moved too far away from Galway's sacred footballing tradition for the purists.

Padraic Joyce harkened back to glory days but if they can adopt the sheer bloody mindedness that Mayo have almost trademarked over the past decade, perhaps Galway can bolt from the blue once more to lift Sam Maguire.

If Roscommon like playing Galway, so too do Leitrim - apart from one or two odd days over the last 30 years, the Green & Gold have never backed down from the Tribesmen and I don't expect next Sunday to be anything different. Of course, Galway are mad hot favourites but maybe they might take us a little for granted. Stranger things have happened but if we witness another epic Leitrim and Galway clash like we did in the 90s, I think we'll be happy.