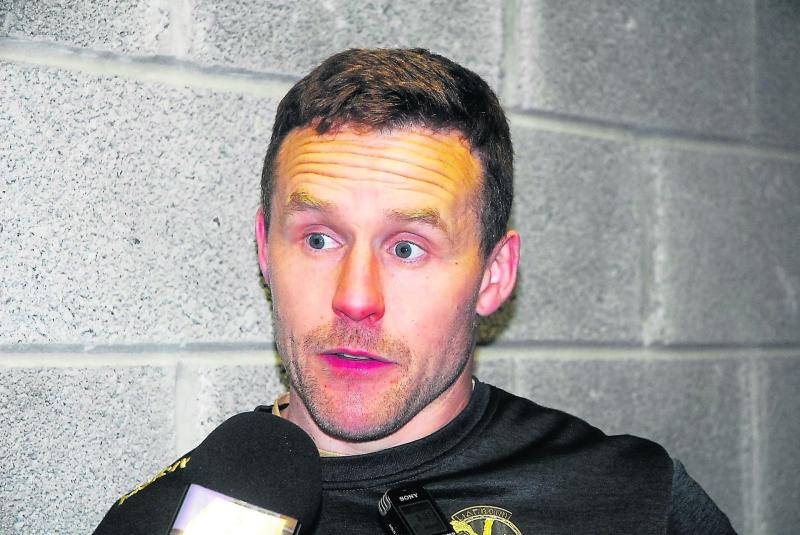 When someone as positive and as articulate as Andy Moran struggles momentarily to describe what went wrong for Leitrim last Sunday in Pearse Stadium, you get some idea of just how traumatic the scale of Leitrim’s defeat at the hands of Galway truly was.

The Leitrim manager took his time to gather his thoughts, addressing his players in the bowels of the main stand in Pearse Stadium before emerging to face the local and national media and it was obvious that the former Footballer of the Year was stunned by the scale of the 4-20 to 0-9 loss.

Particularly cruel was the way the game was taken away from Leitrim just after halftime when Paddy Kelly’s first goal left Leitrim with a mountain to climb after a ferocious and battling first half effort.

“Think you just summed it up but that’s the nature of it,” Andy responded, “You saw it last night with Kerry and Cork and all of a sudden, it went from 13-11 to 23-11 in the space of 15 minutes. Galway kind of did the same to us today but unfortunately for us, there was longer left in the game and fair play to them, they stretched it out after that.

“Disappointed on our behalf with the goals, yeah it is a tough one but you have to take it don’t you?”

The truth was that Leitrim went into the halftime break disappointed to be seven points down as their manager felt their performance in the first half was not reflected on the scoreboard: “We were disappointed going in seven down, the goal did kill us. We knew Galway were going to be a bit stronger coming into the last 15 minutes of the first half but I still think we had chances - Conor Dolan had a chance, we had a goal chance if the ball had just gone to hand.

"The difference in it being 12-5 and maybe 10-7, they are fine margins. But let's call a spade a spade, the quality Galway possess coming off the bench, the goals they got - that’s Division 1 football right there.”

Yet Moran believes that seeing what they are up against first hand last Sunday will ultimately benefit Leitrim in the long run: “Our guys came in at halftime thinking wow, we’re actually in this and then all of a sudden, you see the difference in the second half. You’ve got to be able to see what you need to get to.”

The Leitrim boss points to Limerick footballers as an example for Leitrim to emulate: “Limerick are the team you could look at - they played Mayo in 2018 and they weren’t near it but all of a sudden, you look at them physically, they are getting closer and closer and that will make them more competitive.

“But sometimes that doesn’t really come to year two or year three and you see where Billy Lee is now, after four years in charge - all of a sudden he has built that momentum and got them to that level.”

Neither did Moran put it down purely to the greater physicality of the Galway men: “I wouldn’t put it down solely to physical conditioning - some of it is mental conditioning, being in that position, playing against that level of intensity.

“I’d be disappointed we only put nine points on the board, I think we’re better than that upfront. That would the huge disappointment for me, outside the fact that we conceded the four goals.”

He even admitted to trying to inject some added energy to Leitrim’s challenge by introducing players and wondered if he could have reacted and made changes earlier: “From our perspective, you’d be thinking if we could have done something earlier because it is not that lads are playing poorly, you are just trying to change it and give it energy.”

Recovering from the loss will take some work and the Leitrim boss admitted it will be a steep learning curve for him as a manager: “As players, we’ve had a few League finals that didn’t go our way - they were really disheartening and we struggled to lift it after that. We’re learning here now aren’t we!”

Yet, typical of his infectious belief and positivity, Andy stresses there were positives to be taken from Sunday’s game: “There are positives, sometimes it is hard to find them when you look at a defeat like that but you look at the likes of Conor Reynolds marking Shane Walsh, young Casey who busted his ankle early but did a really good job on Comer, Paddy Maguire.

“You look right through, there are positives - you have to look for them but they are there. I think you can see green shoots. The boys do see in the first half they were competitive when they could live with the physical pace of the game.”