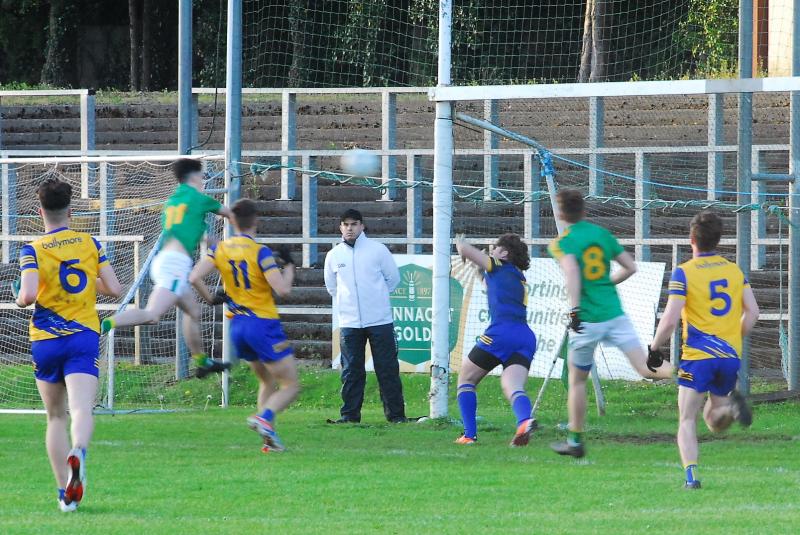 Smiles were broad and backs were clapped last Friday evening Avant Money Pairc Sean Mac Diarmada as Leitrim rescued a dramatic and unlikely draw against Roscommon in the Electric Ireland Connacht Minor Football Championship but it was hard to escape the thought that this was a missed opportunity.

With the three minutes of added time elapsed, Adrian Dockery's side trailed by four points but summoned up a super-human last gasp effort to snatch a draw from the jaws of certain defeat with Paul Honeyman the hero, scoring 1-1 to send the Leitrim support wild with delight.

It was a marvellous and more than deserved reward for an excellent display from the County U17 team and the point was certainly the very least they deserved.

Yet, and this is not wishing to rain on anyone's display or take anything away from the spirit and defiance these young players demonstrated in dire circumstances but  Leitrim should have been celebrating a first win in the Connacht Minor championship since 2018.

Leitrim created five clear cut goal chances before they eventually grabbed one, a goal that came after the added tie had elapsed but had Adrian Dockery's team won this game by six, seven or eight points, there wouldn't have been a word of complaint from anyone.

Even Roscommon fans and journalists leaving Pairc Sean reckoned Leitrim were robbed of a deserved victory and while the Rossies lamented the standard of their heroes and the tactical approach that saw them go man to man in defence, Leitrim almost snatched an improbable victory.

If Leitrim can improve on their shooting accuracy, they will be a handful for anyone because there is physicality, there is skill and there is spirit in abundance in this Leitrim team.

Roscommon dominated the early stages but it was Leitrim who opened the scoring with Ben Guckian putting over two frees inside the first seven minutes with Robbie Heneghan on target for Roscommon who also had two wides from frees and dropped another effort short.

John Curran and Rory Carthy (free) edged Roscommon in front by the 11th minute but a long ball to Josh Maye saw the full-forward start a move that ended with Paul Honeyman firing over on 17 minutes.

James Gilheaney went into the book but then came the first of the missed Leitrim goal chances, Paul Honeyman’s run setting up Josh Maye but Roscommon keeper Sean Kelly saved the shot and the visitors went straight down the field for Heneghan to beat two defenders to score.

Roscommon were still hitting wides although their keeper Sean Kelly had to be smartly off his line to intercept ahead of Darren Cox. However, a foul on Honeyman allowed Guckian convert his third free to tie the scores once more.

Leitrim took the lead again when Eoghan Moyles intercepted in defence and then charged up the field in support of the move with Ben Guckian’s long ball eventually finding the Dromahair man who dodged inside his man to score.

After a slow start, the scores were now flowing for both sides as Heneghan came back with a free but a clever Cox flick found Maye for a good point. Eoghan Murray fired over for Roscommon but a fine Maye score left Leitrim with a 0-7 to 0-6 halftime lead.

When Leitrim look back on this game, it is the opening ten minutes of the second half that will haunt them - Tom Plunkett was denied a goal after just 20 seconds by a brilliant Sean Kelly save and after the fifty went wide, a disastrous Roscommon seemed certain to yield a goal for Josh Maye but the St Mary’s man blasted high and wide with the goal at his mercy.

Roscommon hit back with a fine point from John McGuinness, son of former St Mary’s and Leitrim star Ollie, while Ben Guckian dropped a shot into the keeper. Heneghan put over another free as Roscommon regained the lead and Plunkett was denied another goal chance by a brilliant block from Ryan Dowling.

From the resulting 50, Liam Chandler’s effort fell inches short with Kelly started off a move that ended with Ryan Hanley firing over from distance to put Roscommon two clear.

Leitrim, however, were able to hit back with two placed balls - Chandler from a fifty that cleared the ball by at least five yards and a Honeyman free as the game went tit for tat over the next ten minutes, Heneghan and Guckian swapping frees before Murray saw a shot crash off the crossbar before going over.

Tom Plunkett tied the scores once more with seven minutes of normal time left but Brendan Murphy scored from distance from Roscommon before Rory Carthy scored a brilliant point to put them two clear with less than two minutes to go.

Roscommon looked to have sealed the win when the Leitrim defence got dragged out to the corner and Heneghan grabbed a long ball and soloed in to blast a ferocious shot to the Leitrim net, leaving them five points clear in the first seconds of the three minutes of added time.

Dara Greenan popped up to grab a point in the last minute of normal time but with the referee playing added time and Roscommon virtually down a player due to injury, Leitrim suddenly found themselves two on one when Ben Guckian’s pass found a leaping Paul Honeyman after nearly four minutes of added time.

Still referee Anthony Coyne allowed play to continue and Leitrim managed to get the ball to Honeyman in space who sealed a bizarre, unlikely but deserved draw with the last kick of the game after just five seconds shy of five minutes of added time played.