Tailteann Cup as much a test of resolve as of talent 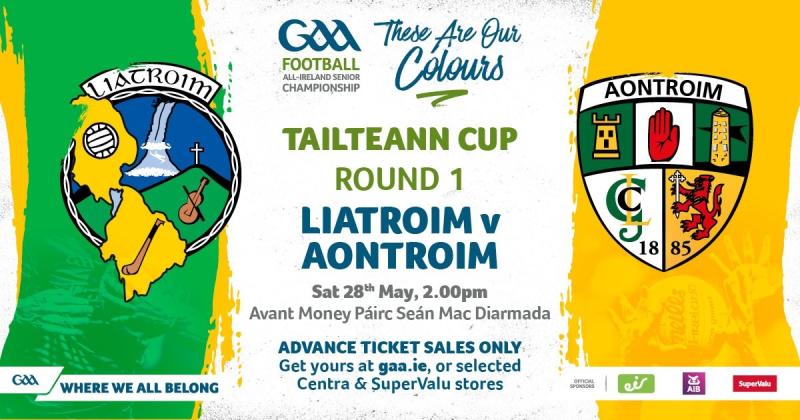 The winds of change are sweeping the GAA world and next weekend sees Leitrim take their first step into the brave new world of the Tailteann Cup when they host Antrim on Saturday in Avant Money Pairc Sean Mac Diarmada (2pm throw-in).

It is the sort of draw that both counties will be happy with - Antrim beat Leitrim last year in Corrigan Park in the League and just missed out on promotion in Division 3, finishing just behind Louth and Limerick, while Andy Moran's troops always fancy their chances against the Saffrons, no matter the standing of the two counties at any particular time.

Attitude informs much of how this game will go - both counties suffered heavy losses in their respective championships, Antrim pushing Cavan before succumbing to a 13 point loss in Corrigan Park while Leitrim's woes in Salthill against Galway are well known at this stage.

Who recovers best from the trauma inflicted on them is just a matter of supposition right now - in their heart of hearts, Leitrim didn't expect to beat Galway in the Connacht Semi-Final but equally, they didn't expect the shellacking them got the Tribesmen.

Antrim have had a month to recover and get back to training after their 1-20 to 0-10 loss to the Breffni blues but they were being tipped as a winners by many northern pundits so perhaps Enda McGinley's team suffered more of a let-down than the Green & Gold.

No more than Leitrim did against Galway, Antrim really put it up to Cavan and trailed by just a point, 0-7 to 0-6, at the break but in the second half, the Breffni men just started to wear them down although the dismissal of Michael McCann definitely didn't help.

McGinley's men adopted a blanket like defence which made score getting, for both teams, very difficult as Antrim's forwards just didn't have the support they needed to cause Cavan more problems but the big question on how Antrim approach Saturday's game is will they adopt the same defensive approach?

That will probably come down to how they regard Leitrim - will Andy Moran's side receive the same caution that Antrim might treat Cavan? Remember, less than a year ago, the counties met in a wild League game in Corrigan Park that almost defies description.

In that game, a tense opening gave way to a blizzard of Antrim scores with goals from Conor Sweeney and Conor Murray while Odhran Eastwood played hell with the Leitrim defence. Antrim led by 11 points with just over 20 minutes left but in one of the great substitute cameos, Evan Sweeney, landed 1-3 with just four shots as Leitrim drew level near the finish.

A controversial finish and an injury time Antrim winner won't be forgotten in the Leitrim camp, adding quite an amount of bite to the game as both teams will seek to get their years back on track.

Who has the edge is hard to know but the first half against Galway demonstrated plenty of positives and lets be realistic here, Antrim are not at the same level as the Tribesmen. They won't have the same intensity or physical dominance and Leitrim's players can expect to flourish a bit more than they did in Salthill.

That being said, it would be wise not to underestimate Enda McGinley's side - they have quality footballers littered throughout their team and they'll be expecting a battle in Pairc Sean.

So next Saturday's game is a test of the resolve and desire of both teams as much as of their talent. Do they want to embrace the Tailteann Cup and use it as a stepping stone or is their season over? And will supporters get behind this new initiative or is the focus turning back to the clubs?

Playing at home may be just the edge Leitrim needs right now. They haven't had long to get over Salthill but if they display the same sort of desire they did that day, there is no reason why Andy Moran's side can't usher in the new Tailteann Cup with a win on Saturday.