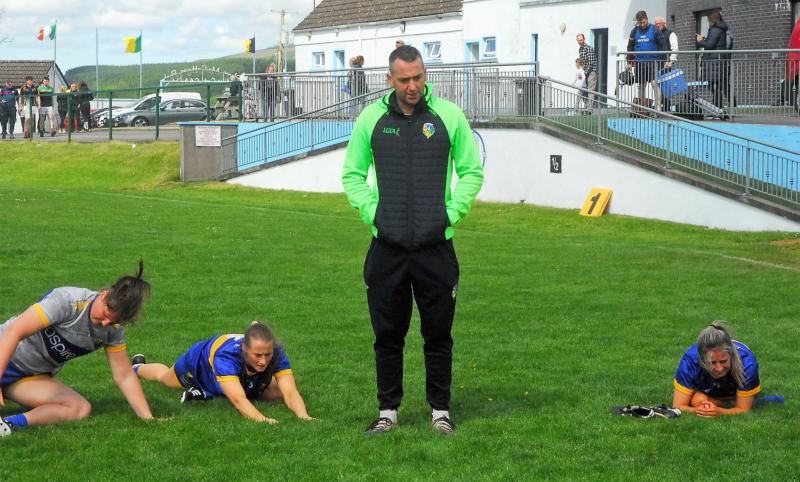 Hugh Donnelly has never been a man to avoid harsh truths and last Sunday was no different as the Leitrim manager pointed to mistakes as the primary cause of his team’s shock defeat to Wicklow in the TG4 LGFA All-Ireland Intermediate championship.

Speaking after the 3-10 to 3-9 loss, Hugh told the Observer “I’ve said this before on numerous occasions, I’ll take any beating when we play well. We didn’t play well in patches, for some strange reason, a number of players didn’t perform today. A few things we did were out of character but credit where credit is due, Wicklow worked hard so full credit to them.”

Hugh felt that Leitrim were going well in the initial stages but felt that his charges hit, as he put it, the “self-destruct” button: “We went four points up in the first half and then we decided to half press the self-destruct button. We fumbled balls,  gave away balls and we were trying to force things that normally we wouldn’t do.

“Yes, we missed the penalty, we missed a few other chances and yeah you can look at things but the bottom line is we have to have a look at ourselves. Too many of us underperformed today, too many of us made decisions and choices that we wouldn’t normally make but that is championship football. You’re going to get punished.”

The Leitrim manager was quick to pay tribute to Wicklow: “Don’t get me wrong, it was a fantastic open game of football but I can’t remember the last time we conceded three goals but hats off to Wicklow,  they worked really hard, they did their homework and unfortunately, we were authors of our downfall -  stuff that we normally wouldn’t do, for some strange reason, we did it today.”

Leitrim now face a huge game against Offaly but Hugh doesn’t foresee widespread changes; “For us, it is back to the drawing board and look at a few things. It is not going to be an awful lot of tweaking, it is not as if it was a mass destruction - it was just a few silly decisions, a few of our kick passes were poor, small margins.

“The bottom line is that we were beaten by the better team, a hungrier team. We’re disappointed but we’ve got to analyse it the same way we analyse every other game. We’ve got to dust ourselves off and get ready for Offaly, it is another mammoth challenge but this is what championship football is all about, you put yourself in the trenches for battles like this.”

And Hugh agreed that Leitrim’s players will be up for the challenge: “This team has never shied away from a challenge. We are regarded as a big scalp and that is a credit to the players that they have got themselves into that position over the last three seasons. It is a tough one to get but when you do progress you are up against that sort of stuff.