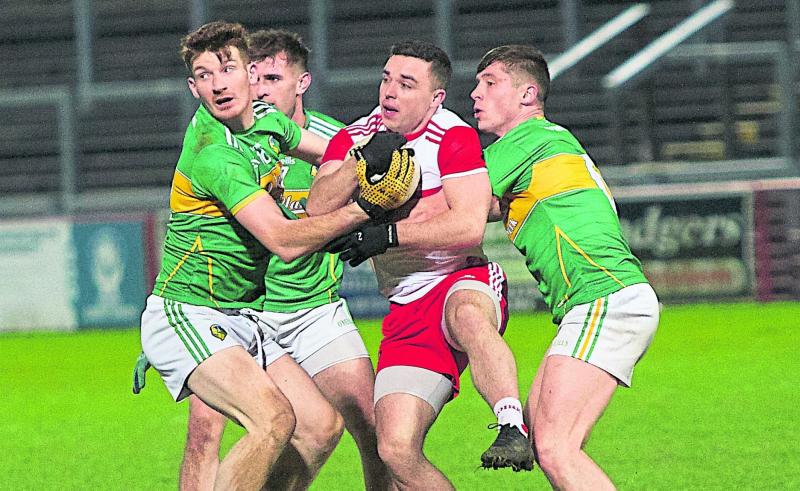 It was a scene that was replicated up and down the county and further afield at approximately 7pm last Saturday evening as the result from Celtic Park filtered through and the faithful who hadn't made the journey north began to rue their decision.

After the FBD defeat at the hands of Roscommon, many felt relegation was a forgone conclusion but for those that made the journey to Derry, their loyalty was rewarded with as fine an away display as Leitrim have produced in many years. The fact that there is a tinge of disappointment at only having drawn the game illustrates just how impressive the Leitrim performance was.

For those who weren't in Celtic Park, there was understandable frustration at not having been there to witness such a performance. The cold evening, the televised entertainment from Croke Park and Ballybofey and the long journey were all factors that when weighed up made the decision to stay at home rather than venture north seem a logical one for many.

If frustration is getting the better of you at having missed out on last weekend's heroics the good news is that there is a chance to make up for that missed opportunity this coming weekend when Cork are the visitors to Avantcard Pairc Sean MacDiarmada.

It goes without saying that Leitrim will go into Sunday's game as underdogs, but isn't that always the case no matter who Leitrim are pitted against. One of the reasons the Leitrim team, management and supporters were so determined to escape the clutches of Division four was to have the opportunity to play against better teams and improve the standard of the team and ultimately football in the county. Cork will be red hot favourites but that does not mean they should be feared.

In terms of population and resources Leitrim and Cork shouldn't be operating at the same level as one another but football can be a real leveller and Cork are operating in Division three based on their results and performances in recent years.

The Rebel County enjoyed a seven point win over Offaly in their league opener on Saturday evening but there is a glimmer of hope Leitrim can take as Cork were actually trailing at the interval.

After the excitement of last year's league campaign which memorably culminated with the Division four final in Croke Park, this year seemed to have begun with a resigned despondency among many in the county that the team could be in for a harrowing time in Division three.

Seventy minutes of action by the Bogside on Saturday eased many of those fears and while it is as important not to get carried away with a solitary result on a good day as on a bad day, it is fair to say the draw in Celtic Park has lifted the spirits of everyone of a footballing persuasion in the county.

Those that were there know how encouraging the performance was. The fitness levels looked impressive and the gameplan was followed meticulously as all who took to the field more than played their part in an excellent team performance.

Those who weren't in Celtic Park were quickly brought up to speed in relation to how matters unfolded in Derry. Radio commentaries and social media updates kept Leitrim supporters around the county and around the world up to date with the action on the pitch and will no doubt have whetted the appetite of many ahead of next Sunday's big game in Avantcard Pairc Sean MacDiarmada.

It is early days in Division three but Leitrim have laid down an early signal of their intent. This is a young team, many of whom have already suffered some tough and harrowing days in a Leitrim jersey but last Saturday night was a further indication that Terry Hyland's team are deserving of your support.

The list of heavyweights that sit alongside Leitrim in Division three suggest the stay in the third tier should be a short one and before last Saturday that is a theory that would have been shared by the most ardent of supporters. The draw in Derry went some way to changing opinions and Sunday's encounter against Cork promises to be another intriguing encounter.

This team deserve your support and who knows, a passionate home crowd could be the inspiration they need to continue their excellent start to the league campaign.