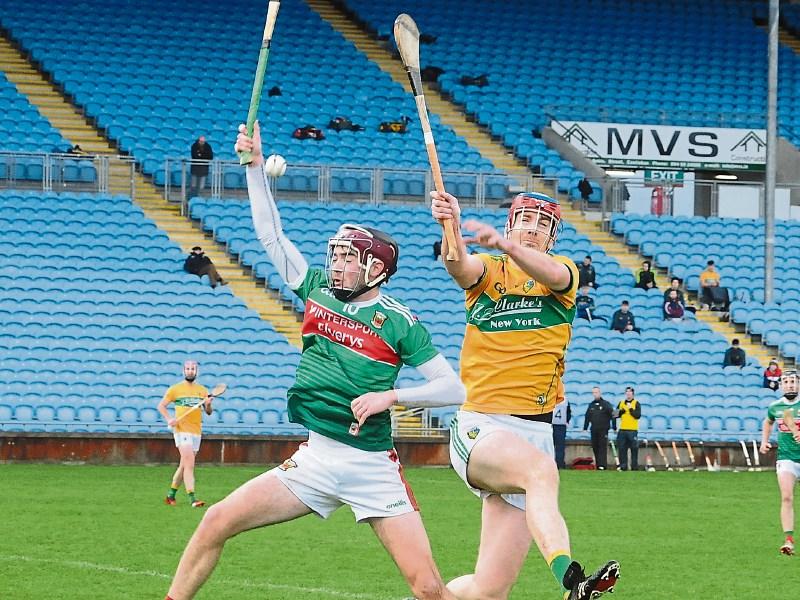 Action from last November's Nicky Rackard Cup Semi-Final in Elvery's Mac Hale Park where Leitrim pushed the home side to the limit for three-quarters of the game Picture: Willie Donnellan

There seems to be nothing more resilient it seems than a Leitrim hurling fanatic for despite a disappointing Allianz NHL campaign, Olcan Conway and his hurling troops head for Castlebar next Saturday determined to cause a major shock in the Nicky Rackard Cup.

A repeat of last year’s Rackard Cup Semi-Final at the same venue, Saturday sees the County hurlers travelling to Elvery’s Mac Hale Park (3pm throw-in) knowing they are up against up it but determined to cause a shock.

“We’re really looking forward to the championship,” manager Olcan Conway told the Observer, “Two really tough games against Mayo and Donegal, the two of them are favourites to win the competition and rightly so, two very good teams but we’re looking forward to matching ourselves up against them.”

But no wins in three outings in Division 3B is hardly the form of a team capable of shocking last year’s finalists but Olcan believes there were some positive signs in the campaign: “The League for us was disappointing, no point saying otherwise. The loss against Louth the first day and the manner of the loss, the referee got the scores wrong and it knocked us for six confidence wise.

“We knew after the first game against Louth that we couldn’t basically win the League unless miracles happened so we did try to blood some new players as well and try to give them a bit of game time. We’re hoping that is going to pay off come championship.”

Indeed, a strong performance against Cavan in the final match was undermined by a lack of consistency and that is what Olcan wants to see from his troops over the next two games: “There is no doubt about it and Cavan have improved massively after last year, I think they’re the most improved team from what I’ve seen last year. For us, consistency is one of the issues that we’re looking at at the minute - we’re playing in fits and starts, we’re getting 15, 20 minutes of hurling together and we’re switching off a little bit.

“We came out of the traps against Fermanagh absolutely flying for 20 minutes and then we switched off again and couldn’t regain momentum. We played in patches against Cavan and we showed glimpses of what we’re capable of but we just haven’t put it all together yet. Look, there is no doubt in our mind that if we don’t put in a 70 minute performance against Mayo, we won’t beat them so that’s where our focus lies at the moment.”

Leitrim tested Mayo to the hilt in last year’s semi-final but Olcan, after watching Mayo beat Donegal in the first game in the group, reckons both teams will be much changed next Saturday: “Mayo are top of the table, they beat Donegal at the weekend. I watched all of the game, they definitely have improved a small bit, they have some new players in and they had a raft of changes as well. I think they had possibly 10 changes, if not more, from our game last year but we’re pretty similar.

“I suppose something I didn’t expect this year is that we’re going through a small bit of a transition. I would have thought last year that we had the team sort of moving in the right direction but we brought in a few young lads and new players and they opened the thing up a little bit more.

“So we’re going through a small bit of change again which, unfortunately when you are playing your League, it is very hard to get that right, to get the balance right but hopefully the League games will stand to us and help us going forward.”

Yet even with all that seems to be going against them, Olcan is determined to aim for victory next Saturday! Asked what he hopes to achieve from this campaign, Olcan says boldly “You know me, there is no hope in it, we’re going for the win! We’re going down to Castlebar to beat Mayo and I’ve said it on numerous occasions that if you don’t aim as high as you can, you’re going to fall short.

“It is to go down to Mayo and beat Mayo, we’re going to try and match them as much as we can, hurling wise and physically wise and for me, I think it's just having the lads mentally switched on. We gave them a great game for 45 minutes last year.

“They were hot favourites last year too so we have to take that on board with us as well, so that we can match them and it is up to us to try and match them for 70 minutes and see where the whole thing falls after that.”

Mayo will have an advantage for Saturday's game as they have had an victory over Donegal in the opening round of the competition last weekend, beating the Ulster men 2-14 to 0-17, the goals coming from former Mayo football star Keith Higgins and Adrian Philips in Letterkenny.

Mayo were actually trailing by three points when Higgins struck for a crucial second goal and they struck for three late points to snatch the victory over the team that defeated them in last year's Final, a small measure of revenge for Mayo.

Victory for home team would see them straight into the semi-finals so they will be well motivated for the clash but if Leitrim can rediscover the fire of last year's campaign and play with that sort of hunger, they will really test the home side. But the odds are very much in Mayo's favour so you would have to expect a home win here.