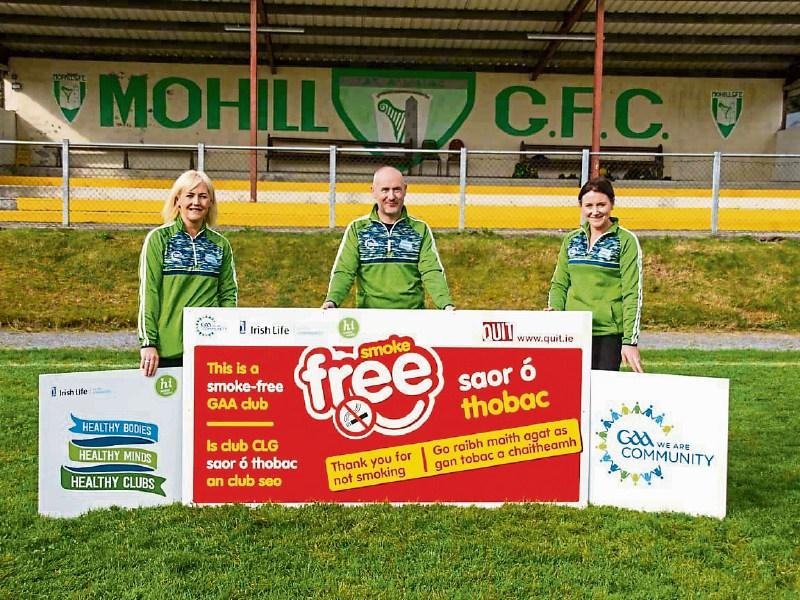 Through the sheer hard work of the Healthy Clubs officer Geraldine Walpole and her Team Members Kevin Curran, Colette Murphy and Aoife O'Brien, Mohill GAA club has now achieved Healthy Club status. What it means is that the Club’s policies, partners, activities and environment are aligned with supporting the holistic health of the club members and the community. The award will be presented in September at a date to be arranged.

It should be the aim of all clubs to be regarded as healthy but when dealing with the general public and all its diversities nothing is simple. The seven steps needed to attain the status were all completed over the last two years. The first four steps were about planning and activating the action plan and these were all completed before the advent of the dreaded Covid.

Step 5 was about Physical and Mental fitness which included Community and Personal Development and Social Inclusion. There was a great response in January 2020 to Ireland Lights Up, over 120 people from the community walking on the new track around the pitch, some had never been to the GAA Grounds have subsequently joined up as walking members. Following that there was great interest in the Couch to 5K but after a week or two it had to be suspended due to Covid restrictions in March 2020.

During Lockdown the Club assisted the local Centra by standing at the door to help control the amount of people going in. Teams were formed to deliver fuel, food and medication to the vulnerable and elderly. The young players visited the local nursing home and showed off their skills outside the windows much to the delight of the residents. The Healthy Clubs Committee arranged three guest speakers to address physical and mental fitness in June and it was really interesting and insightful. The guest speakers were Niall Brady, David Brady and Tomás O Sé.

Teenagers were socially isolated and struggling with home schooling and missing their friends during 2020. In conjunction with the Athletic Club, the Healthy Clubs Committee set up a teenage running programme twice weekly. The teenagers love this initiative and it continues to be very popular with boys and girls alike.

Pairc Philib Mhic Aonghusa is a smoke and vape free zone and one of best initiatives of the club. It got great media attention and is promoted and supported by all club members. A great example to the young people to encourage them against smoking or vaping.

Mohill Healthy Clubs Committee can be duly proud of the progress in the club over the last two years. With success on the playing fields for everyone and the new building progressing, the future looks hopeful for this old club. Fág a’Bealach.