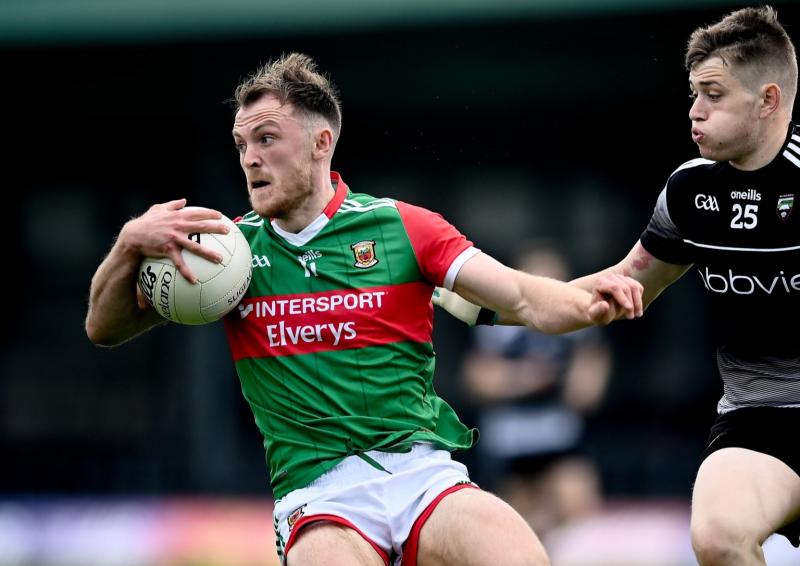 Mayo's Darren McHale in action against Karl McKenna of Sligo during the Connacht SFC win over Sligo in Markievicz Park Picture: David Fitzgerald/Sportsfile

Mayo great Lee Keegan is among the players to miss out as James Horan has named his starting 15 for this Sunday's Connacht Senior Championship Semi-Final clash with Leitrim in Elvery's Mac Hale Park (2pm throw-in).

Keegan, Rob Hennelly, Kevin McLoughlin and Jordan Flynn are the players to miss as keeper Rory Byrne replaces Hennelly while Padraig O’Hora, Stephen Coen and Bryan Walsh all come into the starting line-up. O'Hara played against Leitrim in last year's Championship while Coen started the 2020 All-Ireland Final against Dublin.

The talismanic Keegan misses the game due to a shoulder injury according to a report in The Connacht Telegraph while Diarmuid O'Connor remains on the injury list after sustaining a hamstring injury in Mayo's Allianz NFL Division 2 semi-final against Clare.

The Mayo team to face Leitrim on Sunday has been named ⬇️ pic.twitter.com/7i6hU7kePB

Mayo's preparations for the game have not been helped with the news that a number of the squad are isolating after coming into close contact with a person who had tested positive for Covid. It is not known if the four players who have dropped out of the squad are related to the Covid concerns or are injury related. However, the four players who have come in are all experienced performers in the Mayo colours.

Meanwhile, it has also been revealed that Mayo GAA's Kit van will not have access to the grounds at Elvery's Mac Hale Park on Sunday after it was established by provincial council officials that the van had an unauthorised individual on board as it was seeking access to Markievicz Park for the team’s quarter-final with Sligo.

According to the Irish Independent, the individual was not part of the 40-strong party – 26 squad members, 12 backroom members and two county board officials – who have clearance to attend under Covid match-day protocols. Connacht GAA has confirmed that the penalty is in place for the semi-final and that the van will have to remain outside the grounds.

It is the second time the Mayo kit van has been embroiled in controversy over Covid regulations as it was used at last year's All-Ireland Final in Croke Park to bring three members of the backroom team who did not have clearance as part of the official match party into Croke Park.

The Mayo kit van was previously used to bring three members of the backroom, who did not have clearance as part of the official party, into Croke Park for the All-Ireland final with Dublin last December.

The Mayo team for Sunday's clash with Leitrim is as follows: