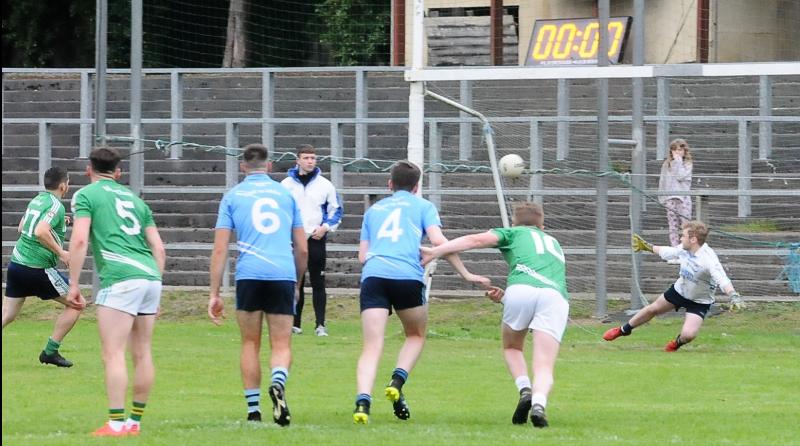 The final outstanding competition from last year, Mohill started the game as hot favourites as they were backboned by Leitrim senior Oisin Madden and players like Cillian Canning, Liam Rowley, Ethan Harkin, Darragh Gordon and Alan McLoughlin. And for most of the first half, it looked as if they would cruise to an easy win despite Allen Gaels grabbing two goals.

But the introduction of Martin Raftery and superb displays from Shane Walsh and Emmett Moran, Allen Gaels actually dominated the second half but failed to translate their dominance more fully on the scoreboard.

They led when Barry Lupton scored Mohill’s third goal with just over 11 minutes left to go two in front but three unanswered points from the Drumshanbo men and some bad Mohill misses meant the Gaels held the lead as the game went into three minutes of added time.

An intercepted kickout led to a penalty and sub Seamus Kennedy, just four minutes on the pitch, drilled the spotkick nervelessly to the Gaels net. Allen Gaels were forced to go for broke and when an attack broke down, Mohill had a clear field in front of them as they charged down the pitch to grab a fourth goal.

The victory is Mohill’s second in the space of a week, adding the 2020 Junior B title to their Masonite Division 1 title won last week against Ballinamore Sean O’Heslins.

The game started with a real bang as Bryan Beirne and barry Lupton swapped points before Stephen McLoughlin finished off a wonderful Allen Gaels move with a seventh minute goal. Mohill’s reply was deadly as man of the match Oisin Madden soloed through and buried a great shot in the Gaels net two minutes later.

Darragh Gordon edged Mohill in front before another surging Madden run ended with a penalty after a foul on Gordon. Ethan Harkin stepped up to take it but keeper Dan Curran made a great save with the follow-up going wide.

Frees from Lupton (2) and Alan McLoughlin stretched the lead to four points but the Gaels gave themselves a lifeline when Emmet Moran’s cross was disrupted by Wayne Gunning, the ball falling to Niall Sorohan to punch to the net from close range.

Allen Gaels suffered a blow when Jason Loftus was black carded by referee Martin Feeney and Mohill finished the half with points from McLoughlin (free) and Darren McLoughlin but they also had five wides before the break where they led 1-7 to 2-1.

The introduction of Martin Raftery before halftime seemed to energise Allen Gaels as they hit four unanswered points in the first seven minutes of the half to take the lead, Raftery (2), Emmet Moran and sub Nicholas Moore scoring while Mohill saw a Darragh Gordon goal disallowed for a square infringement.

Peter O’Neill tied the scores but Niall Sorahan edged the Drumshanbo men back in front. Oisin Madden’s run set ip Darragh Gordon for a point but the Gaels looked the most likely winner when Bryan Beirne points on 15 minutes.

However, Mohill went back in front when Barry Lupton goaled from close range 11 minutes  but an impressive Allen Gaels responded brilliantly, firing over three Martin Raftery frees over the next ten minutes to regain the lead.