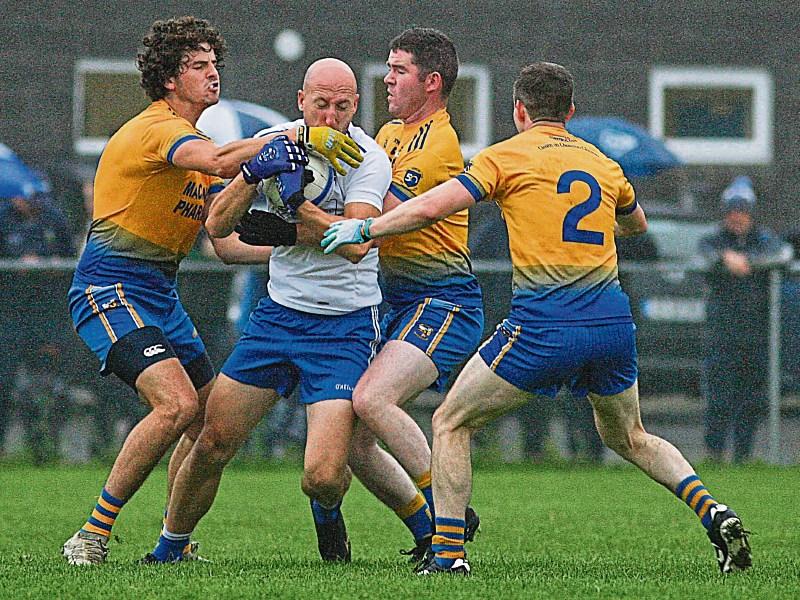 Last year’s defeated county finalists St. Mary’s Kiltoghert got their 2021 campaign off to a winning start after they pulled off an efficient win over Glencar Manorhamilton on Saturday evening.

Playing in lashing rain at Boggaun, which had been flooded earlier in the day, the home side shaded the first half and went in with a slender two points lead at the interval. But after the restart St. Mary’s found an extra gear to turn the tables on Glencar Manorhamilton.

After a slow start by both sides, Glencar/Manor got the scoreboard ticking over when Ronan Flynn fired over a ninth minute point. Two further points when James Rooney shot over and Conor Dolan pointed a close in free, after James McGrail was penalised for touching the ball on the ground, added to the tally.

Keeper Luke Sheridan pulled off a fine save to deny St. Mary’s a goal at the expense of a ’45,’ which Mark Diffley put over to open the Carrick men’s account. Ray Mulvey cut Manor’s advantage to the minimum when he pointed a free before putting St. Mary’s on level terms when he fired over from play.

A Conor Dolan free prior to the first water break gave his side a one point advantage and after the resumption Glencar Manor pulled further ahead with Conor Dolan and Ronan Flynn whipping over a point apiece.

St. Mary’s upped their performance from the beginning of the second half and got on level terms within three minutes of the resumption when Paul Keaney’s free taking accuracy proved to be spot on from two placed balls.

Glencar Manor’s cause was not helped when they went a man down for ten minutes after Niall Brady received a black card. A 38th minute Keaney free put St. Mary’s in front for the first time in the game.

St. Mary’s continued to drive forward and extend their advantage with Ray Mulvey and Alan Doherty each whipping over a point to give the Carrick men a definite grip on the contest and the Carrick side could have been further ahead had not Luke Sheridan deflected a 45th minute Doherty penalty out for a ’45.’

Mark Diffley converted the ‘45’, his second of the evening, to put St. Mary’s four points to the good.

Daniel Maguire replied with a point from play before the second water break to leave the home side trailing 0-8 to 0-11 but after the restart Glencar Manor hauled themselves back in contention.

resurgence in their tank and managed to reduce St. Mary’s advantage to the minimum by 56th minute.

Points by Evan Sweeney and Conor Dolan (free) for Glencar Manor put the game back in the melting pot by the 56th minute but Ray Mulvey ended the fightback when the former county man fired soccer style to the net for St. Mary’s.

St. Mary’s pushed on and ensured their victory before the end with two Mulvey points as well as a converted Paul Keaney free, his fifth of the evening.