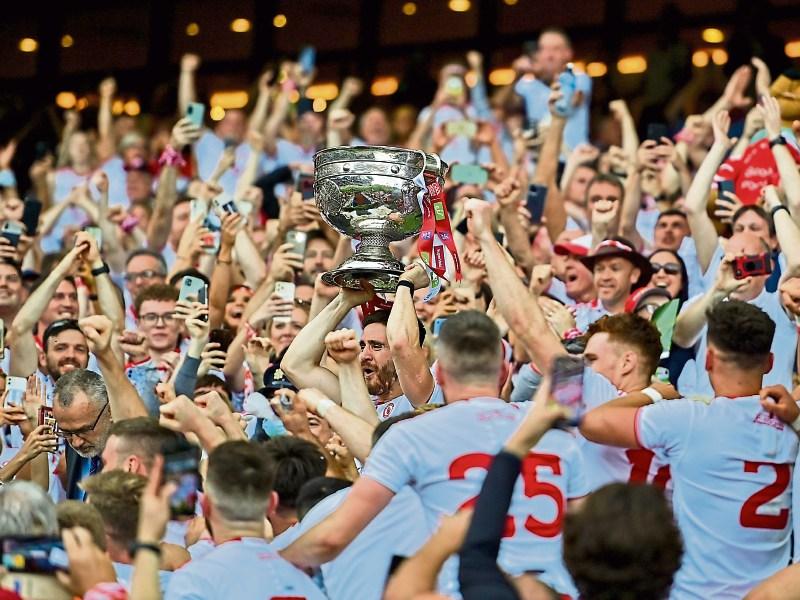 Some sage once came up with the quip that the only thing worst than being talked about is not being talked about. It is a feeling I’m sure the Mayo footballers know exactly this week as they pick through the debris of another shattering day at Croke Park last Saturday.

First of all, congratulations to Tyrone who were clearly the superior team on the day. They took their chances and showed a confidence and self-belief that was strangely lacking in the men from the West and whatever about the controversies over Covid, nobody can doubt the Ulster men were more than worthy winners.

I wrote last week about the curious disrespect shown to the Ulster men in advance of the final as I struggled to find even one pundit predicting a Tyrone win. Yet Tyrone had defeated the presumptive favourites Kerry and also saw off Monaghan and Donegal. Consider too that Tyrone have contested more All-Ireland Semi-Finals and Finals in the past ten years than they did during the noughties, a time when Tyrone ruled over the GAA world like a colossus!

The Dubs may have won all around them over the last ten years but the memory of hidings from Mickey Harte’s stormtroopers during that time causes me chills and I still can’t watch Owen Mulligan’s wondrous solo goal, superb though it was, to this day!

In fairness, it wasn’t just the media - from chatting to Leitrim GAA folk all last week, few could see past Mayo for Sam, with one man telling us they would win by six or seven points - at least!

My gut feeling was Mayo’s victory over the Dubs was overestimated and Kerry’s defeat vastly underestimated, a writer in Monday’s Independent sheepishly acknowledging that the emotions and drama of Mayo’s win clouded critical analysis of that victory, momentous though it was.

You can say that Connolly is being wise after the event but aren't we all wise after the event? Myself and Willie Donnellan, on our various journeys around Leitrim last weekend, chatted about the game and both of us felt that Tyrone were going to shock the GAA world. That shock is reflected in the coverage of Tyrone’s triumph which has veered from rightful praise for the champions to more gushing pity for the defeated Mayo men.

The overriding analysis of Saturday’s game centres more on why Mayo lost rather than why Tyrone won, sympathy for James Horan’s team again clouding reasoned analysis of where Mayo won and lost. Trust me, I know how Tyrone feel - just look back on what was written and what was said after some of those epic Dublin Mayo clashes in recent years.

Do I have any sympathy for Mayo? Honestly, not really - I am a Dub after all but it is the memory of what Mayo have done to Leitrim down through the years that is the greater driver - I don't recall much sympathy back in June!

Strangely, sympathy is thin on the ground among rank and file GAA fans right now, with only one fan I’ve met expressing the auld “Poor Mayo” sentiment. Rather there is a frustration, almost anger even, that Mayo have fallen at the final hurdle - it seems that sympathy only runs so far.

It is even worse on social media with memes flying thick and fast, cruel and funny, but underlining the stark truth that winners are all conquering while losers are consigned to ridicule and regrets. Is it right? Of course not but Mayo fans, as much as they are hurting right now, are just the same as the rest of us and they haven't been shy in their opinions on various opposition players over the years.

My theory is that what used to be the preserve of “bar talk”, confined to a few mates in a pub is now instantly available on social media. Self restraint is abandoned as the desire to get likes, shares and retweets often overrides any ideas of restraint or critical self analysis. But the weirdest aspect of all this is the notion that while a person is free to pass judgement on the opposition without impunity, how dare anyone criticise their heroes! After all, they are all amateurs who don't deserve this - oh the irony!

Aidan O’Shea seems to be the lightning rod for this phenomenon - impressive against Leitrim and Sligo earlier in the year, the Breaffy clubman is gaining a reputation of a “flat-track bully”, great against the smaller, weaker counties, less so against the giants of the game. I don't know if that is fair to O'Shea, I know O'Shea has a profile and is worshipped by Mayo fans and the target of opposing supporters in much the same way that Diarmuid Connolly could do no wrong for the Dubs but was portrayed as almost some kind of terrorist by opposing fans.

For better or worse, O'Shea is the public face of this Mayo team. Unfortunately, he is also a symbol of a team that just can't get across the line, the staggering stat that the Mayo captain has failed to score in any of his seven All-Ireland Final appearances actually took me aback when I read it over the weekend!

Two things spring to mind - O’Shea and Mayo have contested seven All-Ireland Finals, a remarkable achievement but how in God’s name has he not scored on Mayo’s biggest days! But that’s the conundrum for Mayo - O’Shea and his teammates gets them so far but just can’t get them across the final line. How they change that narrative, I don't know - we all hear rumours and speculation but until Mayo get across the line, that tag will hang around their neck like an albatross!

Joe Brolly’s Sunday Independent article has drawn a lot of comment. It was raw reading for Mayo fans but, apart from the timing of some quite brutal but forthright analysis, Mayo might do well to consider the kernel of the Derry man’s argument - that the individual comes before the team in Mayo and until that changes, they won't get across the line.

Brolly made his case with hyperbole and colourful language and as hurtful as it was to read the day after losing an All-Ireland Final, Mayo need to look inward right now. It won't be easy but they only have to look at their nemesis, those boys in blue, to see that changing the story of a county can be done.

Pat Gilroy's “startled earwigs” comment in 2009 drew a lot of laughs around the country but that Dublin team of the noughties are the team that most resemble Mayo right now - great against weaker counties but bullied, beaten and humiliated by the super powers. True, Mayo have at least gotten to All-Ireland Finals than that Dublin team never made it that far but the similarities between the two teams are undeniable.

Both preferred a power running game, using pace and athleticism to batter teams not at their level but when they came up against teams just as conditioned and just as focussed, the superior skill-set of the opposition under pressure won the day - that sums up what happened last Saturday in Croke Park!

But here is a radical thought. Maybe after all is said and done, these things come down to players on the field and their skill set. Of course, you have to have a culture of excellence and structures around the team to help it succeed but without players having the ability to execute the skills of the game under the most extreme pressure, taking that last step is always going to be the toughest one.

The blunt fact is that Dublin's players lacked both the key skills and the temperament in the noughties. Mayo, whatever their failings, don't lack for attitude or belief but when they game was there for the taking, and it was there for the taking, Mayo simply couldn't execute in the moments that matter in the clinically brilliantly way Tyrone did.

And that has been Mayo's story over the past ten years. Until that changes, nothing will change!