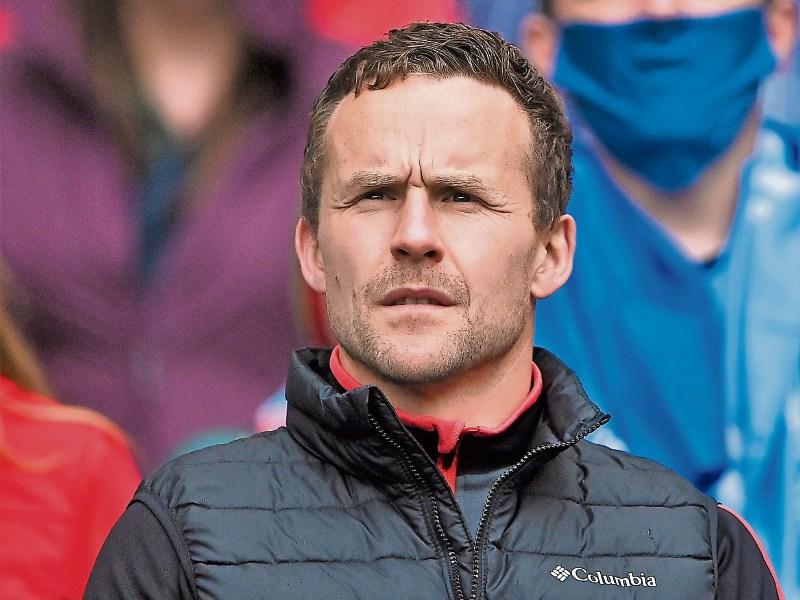 Even when chatting with the Observer on Tuesday morning, all you could sense radiating from Moran was positivity about the task ahead: “It has been overwhelmingly positive if I’m being honest with you, even here in Mayo, a lot of positive well wishers and people speak highly of Leitrim football and I have the added thing that John O’Mahony has been a mentor of mine over the years.

“From the moment this was mooted, Johnno was very positive, the message he kept saying to me that if you can get Leitrim players and supporters buying into it, it is a hugely positive project. That is the hope and the aim going forward.”

The news that the 2017 Footballer of the Year was to take over as Leitrim manager was greeted enthusiastically by fans and that enthusiasm has impressed Moran: “I felt the enthusiasm from the first moment I talked to the County Board. I got huge energy off Enda Stenson and the County Board, huge positive vibes from where they want to bring Leitrim football.

“I got huge positive energy about myself, which is always nice, and how we could grow together in the project . We got phone calls from all over the world - New York to Chicago to Dublin, people have reached out from everywhere, not just within Leitrim but everywhere in Ireland so there is huge appetite for Leitrim to do well in football.

“My job is to create a platform for the players to go and prove what they can do for themselves and that is what we will be trying to do. But the support that we’ve got since the announcement, it is very humbling and you’d be honoured to represent the County with that support behind you.”

Moran sees his appointment as a great opportunity for both himself and Leitrim: “If I’m being perfectly honest, the Leitrim football team and my managerial career are probably at the same point. We’re both starting afresh, we’re both looking to improve and we’re both hungry to get better.

“As I’ve said in many interviews now, make huge mistakes together and then set about putting them right in the right way and a positive way and to leave a bit of a legacy moving forward in terms of preparation, of how to get the best out of yourself and that is mainly my aim for this team.”

Leitrim's new boss had a ringside seat in Elvery’s Mac Hale Park in June when his former teammates handed Terry Hyland's side a record equalling Connacht Championship loss but Moran feels there were signs of potential: “The Mayo game was very disappointing for all in Leitrim but when you reach that bottom level, where you say this is not what we’re about, I think there are huge opportunities to grow and see where we need to go forward and that’s what I’m looking forward to.

“I’ve watched the first ten minutes of Mayo game an awful lot over the last few weeks and if you watch that and look at Leitrim footballers compared to Mayo footballers and didn’t know who was going to be in an All-Ireland Final and who was in Division 4, you wouldn’t have known. But after that ten minutes, the gap began to grow so our aim is to close that gap as much as we can.”

Leitrim’s new manager will be in attendance at next Sunday’s Connacht Gold Leitrim SFC Final but it is obvious that Leitrim’s new manager feels there is real talent there is in the county: “I’m really hoping Ballinamore and Mohill show it this Sunday when they get the coverage live on TG4, I think it is a huge opportunity, I’m looking forward to going to the game.

“You look at the O’Rourkes, the Beirnes, you look at Mark Plunkett, look at Paddy Maguire - why wouldn’t you be able to build a team around those guys. It is just about getting those players and the people around the football community to believe in what we can do and where we can grow.”

Helping him in that task is two former Leitrim stars - Barry McWeeney and James Glancy were former teammates with Moran at IT Sligo, winning a Sigerson Cup together and the new manager is delighted to have both on board with himself and assistant manager Mike Solan.

“We set about getting our backroom team, I obviously brought Mike Solan with me from my own club and then Barry and James would be two ex-teammates of mine from IT Sligo and I’ve stayed in touch with both of them since. The amount of positive feedback we’ve got about having the two boys involved has been absolutely brilliant.

“It has been real positivity for myself about what these guys will bring to the project, I had an idea anyhow but what the Leitrim people have said to me is that they’re going to bring more than even I expected which is great. Their knowledge of the game and their knowledge of the players around Leitrim is huge - I’m just delighted to have them.”

The new manager could find himself preparing for a radically different type of championship if proposals about the structure of the inter-county football championship are approved at the GAA’s Special Congress on Saturday, October 23. And it is fair to say that the Mayo man is an enthusiastic backer of the proposals, even if he feels they need tweaking!

“I think it is very exciting. If I’m being honest, I think all the proposals need a bit of tweaking but I think the one that is most positive for our team going forward is proposal B. I think if it gets through, it needs a bit of tweaking after Congress but play year one and then change it, it doesn’t need to be perfect in year one.

“For Leitrim to get six or seven championship games at the height of the Summer, if you are a squad player within a lower level county at the moment, you might get one or two games and you might never get a minute on the field. Over six or sevens games, every one of the 26 on a 30 man panel would be playing and that is a huge incentive for Leitrim football.

“To get more games, to play in the Summer, to see Pairc Sean full would be an amazing experience. I was lucky enough as a player to play in full stadiums in the Summer but for those players, once you whet their appetite, I think it is just going to open up all the opportunities for Leitrim football.”