Sticking our heads in the sand 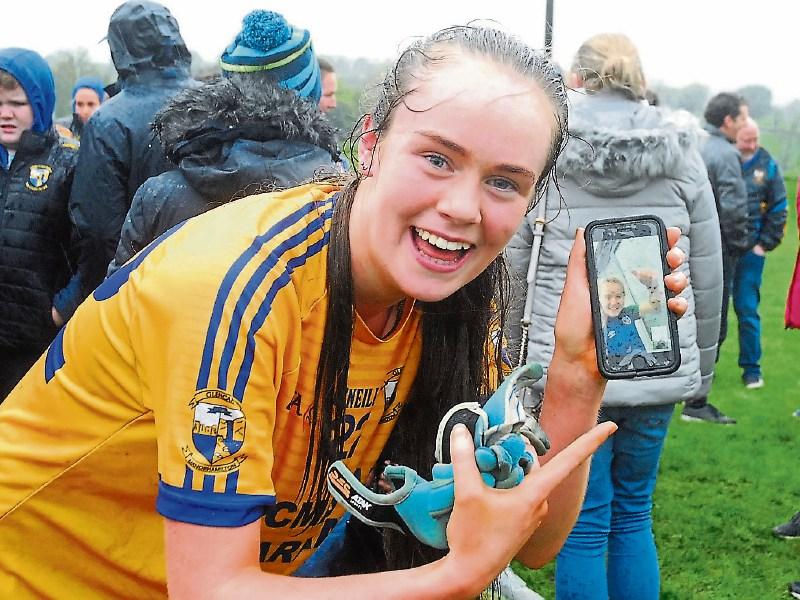 Muireann joins in the celebrations! Anna Devaney displays her mobile phone with her sister Muireann celebrating Glencar Manorhamilton's victory in the Gotham Dry Wall LGFA Senior A Championship last Saturday in Ballinamore. Muireann, who plays with Athlone Town in the SSE Airtricity Women's National League, was on duty with the Ireland U19s Women's squad in the UEFA European Championship Qualifiers in Limerick over the last week. The dual star saw action against both England and Switzerland on Wednesday and Saturday, starting against England and coming on at halftime on Saturday. However, she still had times to join in the celebrations in Ballinamore Picture: Willie Donnellan

The thought that keeps going through my head is “how could they do it, how could they shoot themselves in the foot and simultaneously stick their heads in the sand?” Yes, the GAA’s decision to reject reforms of the All-Ireland Senior Football Championship have left me just that little bit irritated - to put it mildly.

I’d have preferred to devote this column to Glencar Manorhamilton Ladies retaining their Gotham Dry Wall LGFA Senior A crown on Saturday and St Patrick’s Dromahair coming through an intense battle with Ballinaglera to claim the Smith Monumentals Intermediate title.

But there is an anger bubbling up inside me over the events at the GAA’s Special Congress in Croke Park last Saturday. And the source of it is rooted in what happened to Terry Hyland’s Leitrim back in June. Willie Donnellan and myself knew travelling over to Castlebar that Leitrim hadn't a snowball’s chance in hell, so much so that Leitrim County Board Secretary Declan Bohan revealed to delegates last Saturday that the families of the players didn’t take up the option of buying tickets for the game in Elvery’s Mac Hale Park.

That more than anything sums up the problem facing the GAA right now - when the proud fathers and mothers, sisters and brothers could not face what they knew in their hearts was going to happen in Castlebar, you realise we’re in big trouble!

The day was simply tortuous, so much so it could quite easily turn players off representing their county in the future and that only leads to more beatings in a never ending cycle of despair.

Yet it wasn’t as bad as what followed - the deluge of outrage and faux sympathy from all quarters for poor, poor Leitrim. Something needs to be done, we were told ... it’s not fair …. it doesn’t do any good for anybody - all we were left short of was somebody screaming “Will someone think of the children!”

Last Saturday, they had their chance - the opportunity to do more than just mouth platitudes and do something that would have benefited Leitrim and Sligo, Longford and Carlow, Waterford and Clare, Tipperary and Louth, Wicklow and Fermanagh and all those other counties routinely left humiliated each and every Summer by the big boys in the championship.

What did they do? Oh, they talked about the need for change ... we all know there is a need for change ... but when it came to brass tacks, Leitrim and Sligo and everyone else were ignored as the status quo and provincial fiefdoms were protected. I use the word 'fiefdom' deliberately as it bring to mind ancient old castles and lords and kings - and that’s what we got, old powers protecting what they have at the expense of those weaker and smaller than themselves.

Our Connacht neighbours Mayo and Galway voted to stay with the status quo - why wouldn’t they? They’ll continue to trample all over Leitrim and Sligo on their way to yet another Connacht Final but the next time you hear them bleating about unfair advantages, tap them on the shoulder and remind them that when they had the chance to do something for the greater good, they let us all down.

Our friends in Ulster stood united against any notion of reform for they have the truest, most competitive, most loved Provincial championship there is. Yeah, it is thunderous and venomous and competitive but what good has the Ulster Championship done for Fermanagh who have never lifted the Anglo Celt Cup? Or what about Antrim, with its huge population, who haven’t won Ulster since 1951!

Even Down, glorious Down, with five All-Ireland titles to their name, haven’t won their Province since 1994 - at least they could see there was a problem, breaking ranks with the “Ulster says No” campaign to vote yes to Plan B but the Mourne men were always among the most innovative and far thinking among the GAA community.

Let’s be straight about it - Plan B, the option that would see the National League take over as the primary championship vehicle for inter-county football, was not a panacea for the GAA’s ills, far from it. There were flaws but it was a start to bringing about a more equitable structure for all counties.

We heard more concern for the team who would finish sixth in Division 1 in the new format than any of the other 24 counties not lucky enough to be contesting the top rung of the League - what about the team that finishes third in Division 2? Or second in Division 3 or 4? But then again, sixth place in Division 1 was filled by Monaghan, Tyrone and Mayo in recent years so maybe not a surprise after all.

One delegate was worried ever so much about the fairness of throwing a Division 4 team up against a Division 1 team in the knockout stages under Plan B! That couldn’t be fair, that couldn’t be right, he argued passionately.

But wait, didn't Leitrim and Sligo experience just that this year? What Limerick, Clare and Waterford experience year after year? Where was the concern then? Oh, it doesn’t affect your county? Jog on so!

Denying a county the chance to compete for Sam Maguire would be a travesty, they said! But, rejecting the proposals means just that for the Division 3 & 4 counties - it is the Tailteann Cup for them in 2022, no qualifiers and no Sam Maguire unless you happen to win your Provincial title.

Kerry, with their 82 Munster titles, spoke of the need for change but voted against it, pleading for more time to consider the options. Strange that, since these motions have been public knowledge and debated for almost a year at this stage - leading to the question of what is an adequate amount of time to consider an issue in the GAA? A decade? A century?

I’m not bashing Kerry - a lot of counties reportedly backed the idea of change but just not actually doing it. Change for change’s sake is just as stupid as doing nothing but the very real fear now is that necessary change will be put on the back burner and Leitrim and many, many more counties just like them will get caught in a never ending loop of misery at the hands of the big guns year after year after year.

Players wanted the new format but what do they know! Will players make sacrifices year after year sure in the knowledge that they’re going to get a tanking in the championship - I don’t think so?

And what about the morality of asking supporters to dip into their pockets and give their hard-earned cash to fund a County team, basically 30 to 40 players, that we know, deep in our hearts, haven’t a hope of success?

Do I have a solution? No, but I’d be willing to try and see what can be done. Nobody wants a repeat of what happened in Castlebar this year. Winning isn’t everything and not everybody can win - that is a fundamental tenet of sport. We know that deep in our souls but don’t dump on us from a height and tell us it is marmalade! Give us a chance - it is the least we deserve!

GARETH GOT IT RIGHT ON PENALTY CALL! 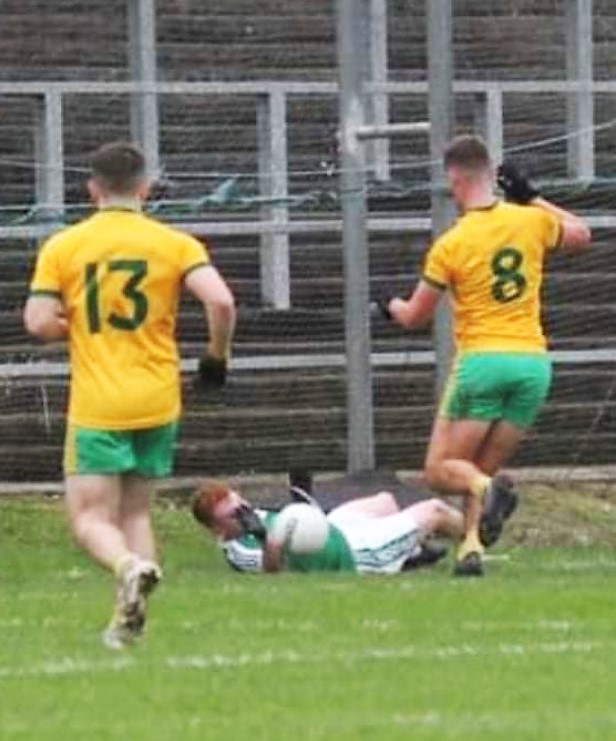 A mea culpa over our report of a big incident in the Connacht Gold SFC Final last week. In common with many others, I thought that Ballinamore Sean O'Heslins were denied a clear cut penalty when Mohill's David Mitchell appeared to handle the ball on the ground.

Referee Gareth Foley got in touch, with the accompanying photo, to point out that the ball had bounced up just before the Mohill man had played the ball away. After checking out replays and freeze framing the dramatic moment, I have to hold my hands up and say Gareth and his team got it spot on - the ball did bounce right before Mitchell cleared it.

Well done to Gareth for spotting it in real time and I'm glad to set the record straight for Gareth & his team who did a fantastic job on the day.