Glencar Manorhamilton all set for battle of the champions! 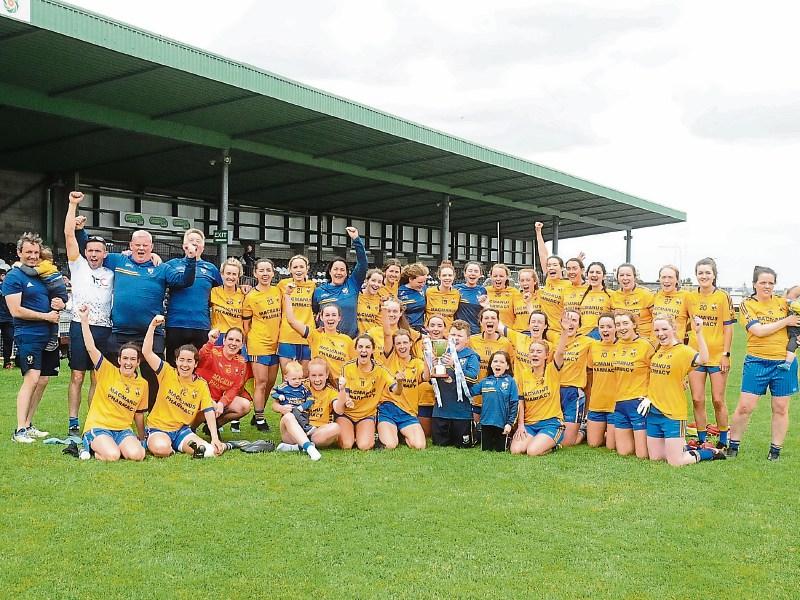 Another new chapter in Glencar Manorhamilton's incredible rise through the ranks of Ladies football will be written next Sunday in Swinford Amenity Park when the Leitrim champions take on two-time defending champions Kilkerrin Clonberne.

Sunday's game also boasts another unique feature as the 2020 Connacht Senior and Intermediate Club champions meet in the decider and Glencar Manorhamilton manager Padhraic Corrigan is relishing the experience of seeing his charges go up against the best in the province!

“If you are not playing these types of teams and these type of games, you may as well stop when you win your county,” Padhraic told the Observer, “This is where you want to be, this is the only way you progress, the only way you get better and everybody wants to play against the best and we look forward to testing ourselves on Sunday.”

Certainly Padhraic is not underestimating the challenge posed by a team chasing a third Connacht title on the trot: “I was at the Clann na Gael game on Sunday and they were pretty impressive alright but you know what, we will relish the challenge. I know I am going over old ground but you have to play these teams if you want to get better.

“It will be a big, big ask at the weekend, we’re up against a Kilkerrin Clonberne team that has been out and about in Connacht Senior, winning multiple Galway championships and they are a formidable team but we will look forward to it.”

Corrigan's two years at the helm of Glencar Manor has seen them break new ground several times but Sunday's Final is a big step up for a team who won their first ever Leitrim Senior Final in 2020: “This group of girls, anybody that has followed them over the last two years, be it underage or adult, knew they were destined for good things and we are progressing nicely as the man says.

“I hope that people realise what the girls have done over the last two years - to win your first championship, go back to back, win the Connacht Intermediate and with all the Covid delays and all of that, and then in our first time in Senior, beat St Nathy’s to reach the Connacht Senior Club Final - they are a fantastic group of girls and they deserve to be here.”

Sticking our heads in the sand

Muireann joins in the celebrations! Anna Devaney displays her mobile phone with her sister Muireann celebrating Glencar Manorhamilton's victory in the Gotham Dry Wall LGFA Senior A Championship last Saturday in Ballinamore. Muireann, who plays with Athlone Town in the SSE Airtricity Women's National League, was on duty with the Ireland U19s Women's squad in the UEFA European Championship Qualifiers in Limerick over the last week. The dual star saw action against both England and Switzerland on Wednesday and Saturday, starting against England and coming on at halftime on Saturday. However, she still had times to join in the celebrations in Ballinamore Picture: Willie Donnellan

The north Leitrim women have been on the go practically non-stop for the last 18 months or more but Padhraic has yet to hear a word of complaint from his charges at the strenuous schedule they have faced over the last 12 months in particular.

“You mentioned that we’ve been on the road for over 12 months but not one complaint, they just get on about it. Nobody is saying it is a long year or anything about it, they are just mad to play football. Winning helps, winning definitely helps but it is enjoyable working with the girls and the two Sheridan lads, John & Ciaran, we enjoy it.

“We get a buzz when we go to training and it takes your mind off other stuff. Playing St Nathy’s, we had the Cammie connection as well so first of all, we wanted to be playing against them and then we wanted to beat them so it is all steps towards where this team is going.”

A bit of illness in the camp and an injury to Muireann Devaney are the only worries Glencar Manorhamilton have going into Sunday's Final but Padhraic fully expects the underage Ireland soccer international to take to the field against Kilkerrin Clonberne, commenting “Muireann had an achilles injury but wild horses wouldn’t hold her back!”

Kilkerrin Clonberne start next Sunday’s Final as the reddest of red-hot favourites and it no surprise following their 3-19 to 0-5 win over Mayo’s Knockmore in the first round and an even bigger 6-22 to 0-4 destruction of Clan na Gaels last Sunday in the semi-final.

But Padhraic stresses that Glencar Manorhamilton must be brave as they take on the Galway side: “Be brave will be the motto - that’s what they do and we’ll be saying to them on Sunday, because we’ve been saying to them all year. Every single one of them just to be brave, fight your own corner, win your own battles.

“Not every player will win their battles but as a team, as a collective, we want to fight to see us over the line. We’re not going to go all defensive, we’re not that type of team. Would we even know how to do it as a management team, never mind the players. We’ll be brave and hopefully we will take our chances.”

Kilkerrin Clonberne have won the last two provincial titles along with victories in 2015 against Kiltubrid and 2014 against Mayo's Carnacon and they would be regarded among the favourites for the All-Ireland Club crown.

Backboned by the Ward and Fahy sisters, Kilkerrin Clonberne handed St Nathy's, a side Glencar Manorhamilton beat by five points in the 2021 semi-final, a 2-26 to 0-2 defeat in the delayed 2020 Connacht Club Senior Final, a point that emphasises the task facing the Leitrim champions.