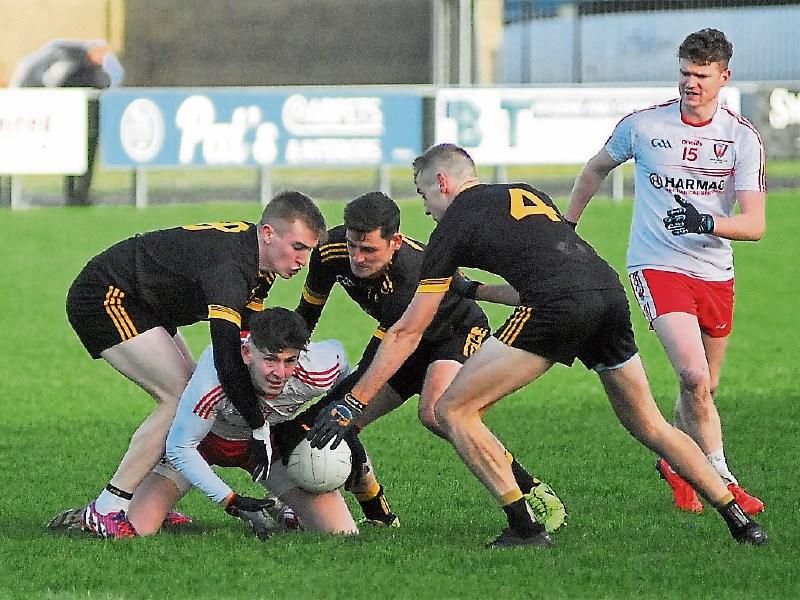 Playing with the strong wind at their backs in the first half, Dromahair burst out of the traps, determined to put on a good show but once Leitir Mor found the net on 13 minutes with a sucker punch, their experience and physical power told the tale.

That strength was key on a heavy pitch in tough conditions as, the longer the game went on, the more that strength was translated into scores on the board. Leitir Mor's first goal was a real kick in the teeth for Dromahair as it undid their bright start and put Leitir Mor on the road to victory, although the black card for Gary Fowley two minutes after certainly robbed Dromahair of momentum.

Dromahair fans complained long and loud about referee Cormac Reape and he made some contentious decisions to be sure. But there was always a sense that there was a gulf in class between the Leitrim champions and Leitir Mor and whatever about decisions that didn't go their way, Dromahair were unable to cope with the physical power and intensity of the Gaeltacht side

Dromahair got off to a swift start with Gary Fowley taking a clever mark in the corner before splitting the posts inside the first minute. Dromahair were full of energy but it came with a cost as Caillin McLoughlin was yellow carded for a late hit in the third minute.

Leitir Mor opened their account three minutes in when a good move split the Dromahair defence, Matias Eoin Bairead firing over. A poor kickout was pounced upon by Leitir Mor’s Aonghus O’Fatharta but he left his shot fell short.

Dromahair's next point came when they caught the Galway side unawares's with a short fifty routine that was punished by a good Martin Feeney point on six minutes. Dromahair doubled their lead when Leitir Mor were penalised for a short free kick, Jamie Conlon’s long ball bouncing off a defender with James Clancy firing over to put his team two clear.

Leitir Mor's Evan O’Flatharta saw a shot blocked while Iarla O’Curraoin was carded for a tackle on Martin Clancy. Jamie Conlon put the long range free wide and Dromahair were made to pay a heavy price on 13 minutes. A quick ball to Warren Seoige saw him evade Jamie Conlon before getting the ball to Aonghus O’Fatharta who blasted to the net from close range and, after all of Dromahair’s energy and good work, they found themselves a point down.

In fairness, they responded well, forcing a turnover with Shane Fowley setting up James Clancy for a good point but this was to be the Leitrim’s champions last score for 28 minutes and during that time, Leitir Mor killed the game stone dead.

First came a black card for Gary Fowley, a decision that angered Dromahair fans. Fowley took down Warren Seoige after he grabbed at the Leitir Mor player who was getting away from him, even if the Galway man made the most of it.

You can argue that Fowley didn't pull him all the way to the ground but it was hard to argue with it in real time, with some frustration that most of these fouls usually escape the black card penalty that is supposed to accompany it.

Dromahair coped well with Fowley's absence, limiting their losses to just two points. Oisin Mac Donnacha pointed after Dylan Seoighe’s shot was cleared off the line and Warren Seoighe pointed after Martin Feeney looked to be fouled in the middle of the park, the Leitir Mor man soloing into point with ease.

The decision not to give Feeney what looked like a clear free increased the ire of Dromahair fans but when Fowley came back on with five minutes left in the half, they were still in contention.

A poor Dromahair pass was intercepted and Aonghus O’Fatharta soloed in from the 50 yard line to blast the ball over the bar. It came with a cost however, as the Leitir Mor full-forward injured himself and was replaced before halftime.

The killer second goal came as much of Leitir Mor’s scores did, with an attacker running in behind the Dromahair defence to take a pass. Matias Eoin Bairead received the pass and lofted the ball across the face of the goal for a leaping Warren Seoighe to palm to the net.

Leitir Mor’s dominance was reinforced when they kept the ball for a long spell in added time, playing the ball over and back across the pitch before Chris Seoighe popped up to point. That left Leitir Mor with a 2-5 to 0-4 halftime lead and they would have the benefit of the wind in the second half.

Keeper John McGoldrick made a good catch from a long range Ciaran Bairead shot in the first minute. But Leitir Mor were in control and three points in the first ten minutes from Iarla O’Curraoin, Oisin Mac Donnacha and Dylan Seoighe reinforced that.

Dromahair ended their scoring drought with a 42nd minute Martin Feeney free but despite their best efforts, they would not score for the remainder of the contest while Leitir Mor would add five more points with Dylan Seoighe's point from a sideline ball 40 yards out was the highlight with only a couple of missed chances from Martin Feeney and James Clinton to show for Dromahair.