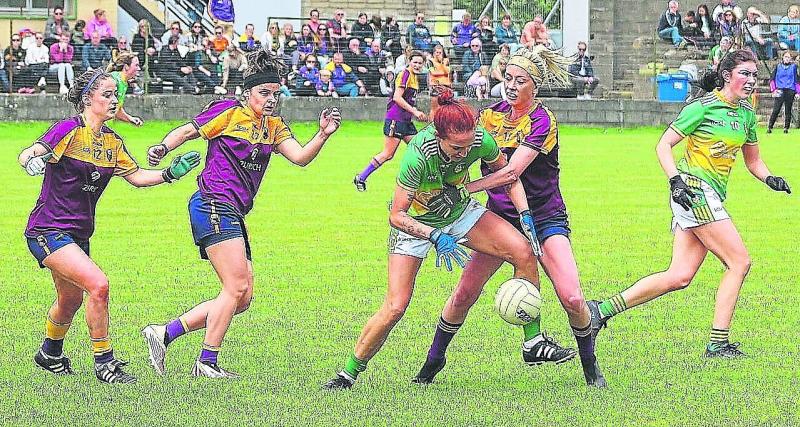 When Leitrim look back on their TG4 LGFA All-Ireland Intermediate championship campaign, it is not hard to imagine that regrets over missed chances will loom large in the mind as Hugh Donnelly’s side again missed big chances at crucial times last Sunday against Wexford.

After the enormous high of retaining the Connacht Intermediate crown scarcely four weeks ago, Leitrim saw their season implode as they suffered three successive defeats at the hands of Wicklow, Offaly and last year’s defeated All-Ireland finalists Wexford.

Leitrim manager Hugh Donnelly stood down after the game, bringing an end to a three year spell where he rejuvenated a team that seemed to be listless and going nowhere, winning two Connacht titles and reaching last year’s Quarter-Finals in the championship.

As they had in all their games, Leitrim got off to a blistering start, leading 0-5 to 0-1 after 12 minutes but again, in a recurring theme of this year’s campaign, the Ladies saw their lead wiped out when the home team scored a blistering 1-4 in a seven minute spell.

A penalty before halftime put Wexford into a 2-5 to 0-7 halftime lead and while Leitrim pulled back two goals from speedster Laura O’Dowd, it was the missed chances from Leah Fox, O’Dowd and sub Vivienne Egan that cost the visitors the chance of a morale boosting victory.

With Wexford causing something of a stir by recalling former star keeper and current selector Mary Rose Kelly between the posts, having made her debut 26 years ago, the move proved a wise one as the current Wexford selector made a series of crucial saves to deny the Green & Gold certain goals.

Leitrim were already out of contention for the quarter-finals before a ball was kicked and probably would have preferred to avoid the game altogether were it not for the possibility of a fine for not fielding a team.

With little to play for between the already qualified home-side and out-of-contention Leitrim, there was lots of room for experimentation but it was Leitrim who got off to a bright start with Michelle Guckian, again top scorer here with six points, Leah Fox and Roisin McHugh on target.

With a couple of Wexford kickouts going over the sideline, Leitrim looked in control but a goal from Aisling Murphy at the second time of asking after Michelle Monaghan made a good save from her first attempt put the sides level.

Wexford soared clear by 2-5 to 0-7 on 27 minutes when Catríona Murray rammed a penalty to the top left corner of the net after referee Kevin Phelan pulled play back for a tug on Murphy’s jersey despite the latter having pointed.

That’s how the scores remained at half-time despite Leitrim twice threatening to net in the closing stages, with Leah Fox kicking wide, before Mary Rose Kelly produced a brilliant reflex save to deny Laura O’Dowd.

Anne Byrne extended Wexford clear by 2-6 to 0-7 before Leitrim injected intrigue when getting back to within 2-6 to 1-7 with the aid of a Laura O’Dowd goal on 40 minutes. Both teams missed chances, Amy Molloy crashing a shot off the Leitrim crossbar before Kelly denied Vivienne Egan at the other end.

Wexford did raise another green flag on 44 minutes when Clara Donnelly and Ellen O’Brien combined to set up Catríona Murray for her second goal, with a close-range finish on 44 minutes but a second goal from Ballinamore’s Laura O’Dowd got Leitrim right back in the mix, twice drawing level with the home side.

Late points from Sherene Hamilton and Aisling Murphy sealed a two point winning margin for the home side who now face Tyrone in the All-Ireland quarter-finals with Louth taking on a Roscommon side defeated by Leitrim in the provincial campaign, Longford facing Clare and Wicklow, surprise conquerors of Donnelly’s side in the first game, taking on Laois.

For Leitrim, the hunt now begins for a new manager while Sligo will be competing in the All-Ireland Junior championship next year after they were relegated along with Down.