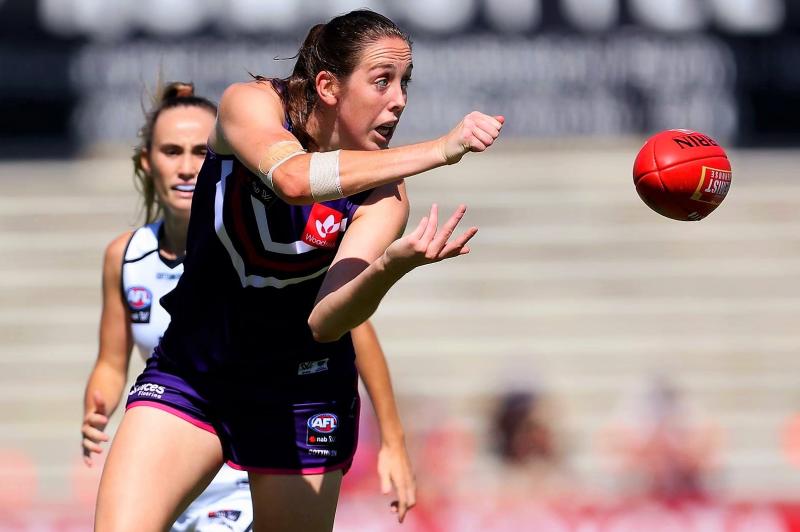 “It is great craic!” is the reaction of a laughing Aine Tighe when asked about getting used to the oval ball used in the AFLW as the Kiltubrid & Leitrim star details the challenges of getting used to a completely alien ball, let alone a completely different game to the one she grew up with.

“Certainly not mastered, a work in progress I think,” was Aine’s assessment of her proficiency with the Sheerin ball, adding “You certainly get more used to it, more comfortable with it but it can certainly frustrate the life out of you at other times. Even just kicking, once you get your touch in and get used to kicking it, it becomes more and more comfortable.”

To ensure she hasn’t lost her touch during her visit home, family and friends have been roped in to helping the Fremantle Dockers star to practice with the ball: “Full on practicing while I’m at home, I have the girls trying to kick it back to me and it bounces anywhere and everywhere. Bouncing is probably the hardest part at full pace, walking or jogging is fine.

“The Australians struggle when you give them a gaelic ball so it is swings and roundabouts - with the AFL ball, you have to bounce it out in front so that it comes back but if you try to do that with a gaelic ball, it just goes flying or rolling away from you.”

Apart from dealing with the new ball, Aine reveals that what we witness on our TV screens is actually not the chaos it seems but rather a very structured gameplan with somewhat different objectives to what we’re used to in Gaelic games: “The big difference with gaelic games is probably the structures and how technical it is in terms of formations, layouts and how both teams will structure their gameplan. 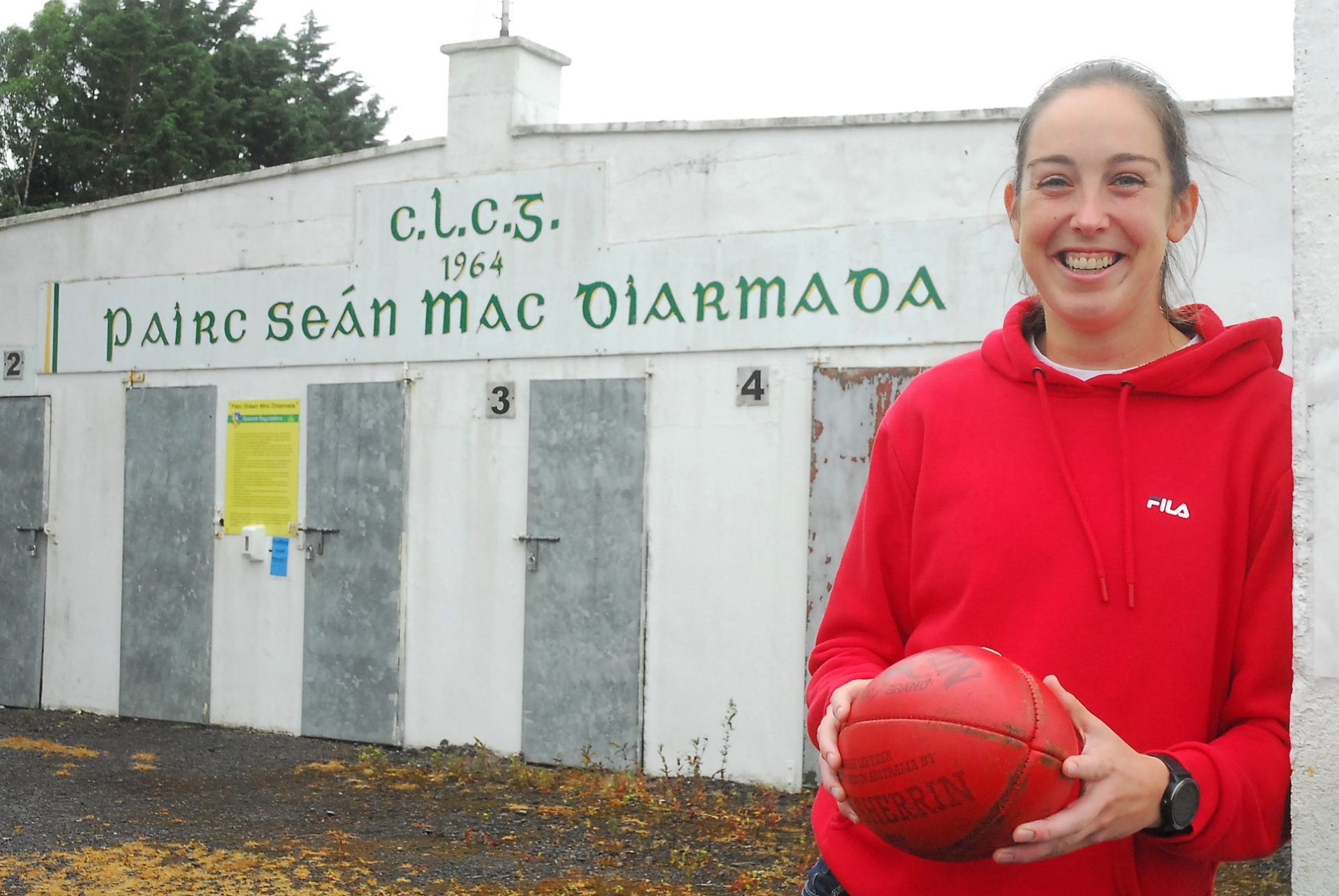 It is a big change in mindset for the Irish contingent who seek space when on the ball instead of looking for contests: “Sometimes putting the ball out of bounds is a win. Coming from gaelic, why would you do that when we would be looking to find somebody in space? It is a different game at the end of the day and there are certainly things that you’d be like ‘why did you do that’ but the other side of it, there are things you could bring back to gaelic, like ‘why are we doing that’ - there are pros and cons and it takes a bit of getting used to.

“That side of it, for Irish girls coming in, is probably the biggest challenge because that stuff you have naturally from playing gaelic football, you don’t really think about it, you just do it on instinct but you certainly have to think a little bit more and I’d be more conscious of other things going on.

“Those two things always collide in that when you end up trying to be so structured, it ends up being chaos whereas sometimes if you play what is in front of you, play on instinct, it opens the game up a bit more - which I think it what a lot of the Irish girls do a bit more that local girls, go a little bit rogue, they see something and just do it, create a little bit of extra space.”

It is that unpredictability that the Irish players bring that  the AFLW readily embraces: “From my experience and from speaking to a lot of the girls over there, that is very much encouraged. You are recruited for what they’ve seen you do in gaelic and they want you to bring those attributes with you. They don't want you  to get too bogged down on the structures and everything they’ve grown up with because when you do, you can definitely play more effectively.

“The quieter games you have  is when you are almost too focused and you’re worried about what you’re trying to do and what everyone else is doing - just throw off the shackles and go play.” 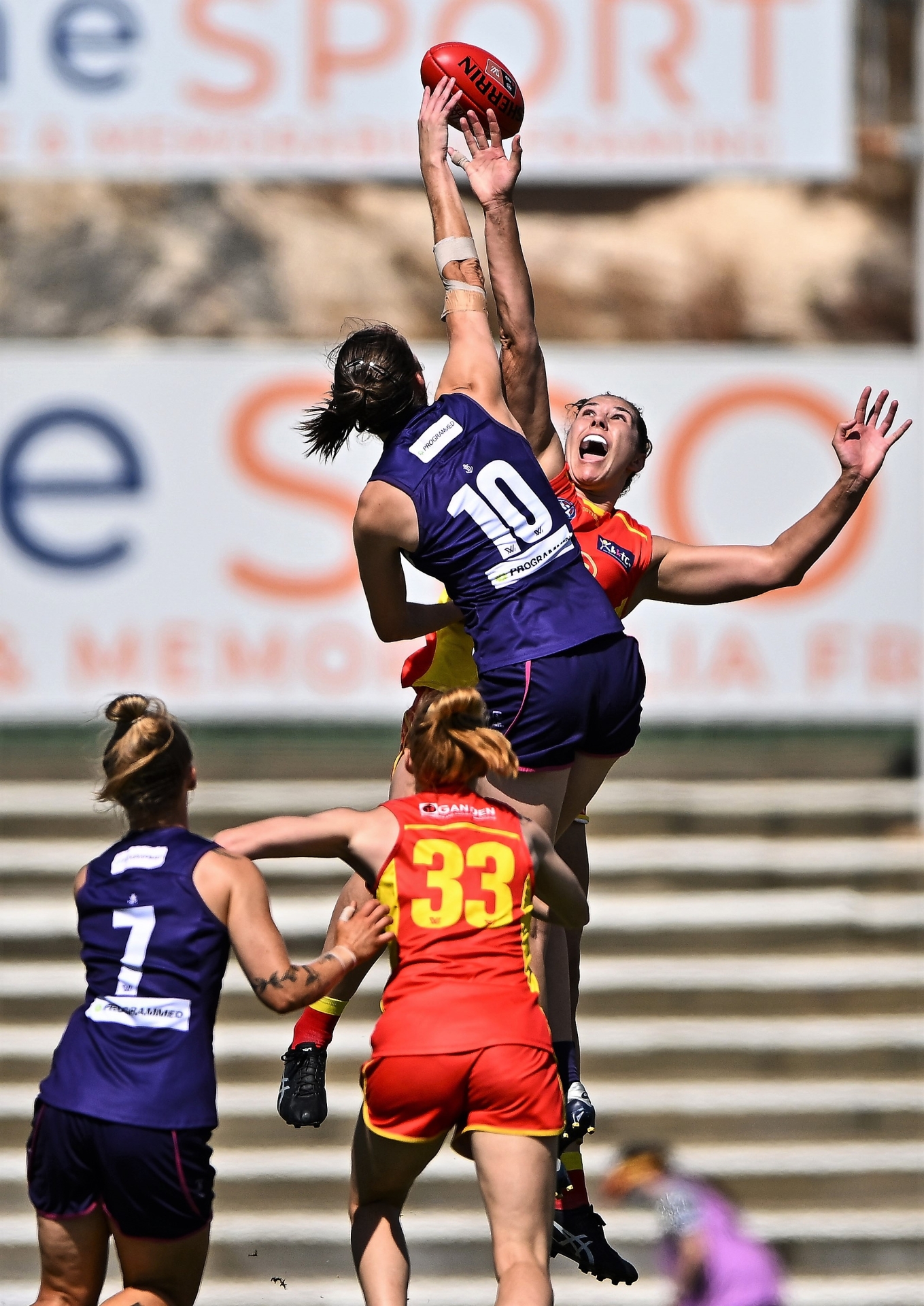 A flying Aine Tighe reaches high for the ball

One of the biggest changes Aine had to cope with during the last year was a switch from attack into defence when injury struck the Dockers but the move had unexpected benefits! “It was a bit of a shock at the start, I  thought our coach was joking when he suggested it. We were struck down by injury and one of our All Australian defenders got injured and, for that spot, we needed a tall player to play in the backs so he told me a couple of days before.

“Obviously everything is so new to me and I’m still learning so I was like ‘I’ll give it a go’ but I learned so much playing against some really good forwards. As a defender, I guess the job is to stick with them and try to curb their influence but I think it was so valuable for me to watch them, learn from them and see what they do so that when you head back up the other side of the field, it gives you huge confidence.”

The switch brought back memories for Aine: “Definitely enjoyed it. When I started off playing gaelic football, I played at centre back so I’m happy to play anywhere on the field, as long as I’m getting involved and getting stuck in, I don’t mind at all.”

With Aine heading back to Perth shortly for pre-season training, it is a demanding schedule but one that she has eagerly embraced: “Normally we train collectively five times a week. Pre-season we do a gym session and normally an education block where we’d be in a lecture theatre for 45 minutes to an hour on, be it our structures or other teams structures and what we’re trying to learn.

“Then we’d be on the field for a full training session on Tuesday and Thursday nights and Saturday mornings. We’d have a gym session on Wednesdays so it is essentially gym Monday, train Tuesday, gym Wednesday, train Thursday, recovery Friday. We’d have a big enough session on Saturday, sometimes we’d do our pitch session and then any extras you have to do be it extra weights, extra skills, extra recovery and then Sunday is recovery.

“The actual session itself is probably an hour and a half to two hours but we’d probably be in the club from about 4 in the evening, getting your strapping, massage, anything you need to do, then into the gym and do your activation and stuff. We normally start training at 5.30 and you’re normally off the track just after 7. Then it is ice baths, recovery, shower and then upstairs for dinner and normally out by eight, 8.30.”

It is a tough schedule but Aine only sees the number of Irish players growing over the next few years with the expansion of the AFLW: “I think over the next couple of years, there will be a few more just given the new teams coming in so 120 new players have to be found, the potential is there for more Irish girls to go out  because the level the girls are training at and playing at over here is really, really close to over there. You are ready made in terms of athleticism which is something they are catching up to.

“We had ten games last year, it is still going to be ten games, home and away, next year but there will be four weeks of finals and they are hoping to increase that year on year. The boys play 22 rounds so even if the girls got to 17 rounds, where everyone plays everyone once in a couple of years, it would be great.”