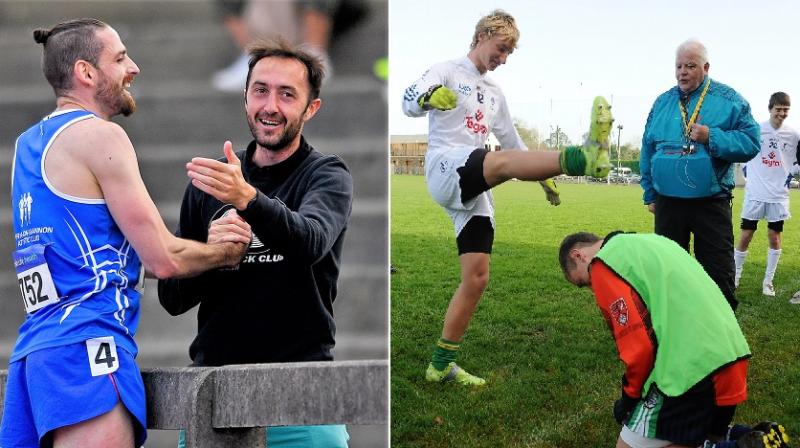 Don’t know if you saw a remarkable interview with Feidhlim Kelly in the sports pages of last weekend’s Sunday Independent but if you haven’t and you’re a true sports fan, not encumbered by the blinkers that allow you only see your own particular passion, then don’t miss out - read it, absorb it and maybe learn a little.

By now, you all know I’m an athletics anorak and while I, like nearly everyone in the Irish athletics community, know Feidhlim well, to the greater public, the coach of Dublin Track Club is one of those little curiosities that get a public airing every now and again when an Irish athlete wins a medal on the international stage.

Mark English’s bronze over 800m at the European Championships catapulted Feidhlim into the public consciousness, all the more so when a picture from our own Gerard O’Donnell, of this parish as we like to say, went viral as Kelly wept with his head in his hands in Munich’s Olympic Stadium after the Donegal's runner's magnificent achievement.

Kelly, who I believe may have some links to Mohill to add to the local factor, once produced an athletics podcast called “Jumping the Gun” with O’Donnell and Cathal Dennehy, who captured the essence of the mercurial Kelly in his article in the Sunday Independent, that was not just recommended listening but essential. Feidhlim has worked as a coach, a journalist and rubbed shoulders with greats like Usain Bolt and Mo Farah among others. So it is fair to say that the Raheny AC clubman is one of those people you just can’t put in a box.

To give you some idea of what Feidhlim is like, just picture the late John Morrison and you get the idea  - another mercurial and inspirational rebel, at times bewildering and frustrating but also an always absorbing individual who grabbed your attention with both hands and didn’t let go.

Morrison, and Mickey Moran for that matter, were  fascinating to listen to or to bounce ideas off and I’ve said it many times before and will keep saying it, as important as it was to have the duo  installed as coaches / managers of the Leitrim Senior men's team, I wonder if we in Leitrim  missed a trick in not appointing them as coaching czars for the county, developing young players and more importantly, developing young coaches.

One of John’s protégés is James Glancy who left his role as selector with Andy Moran’s senior team to join up with his good friend Paddy Christie in Longford, a man he worked alongside with the Dublin Minors, and James will tell you himself the impact John Morrison had on his coaching journey.

It is why a good coach is sometimes much more than just a coach, although the phrase just a coach does not do them justice.

PJ Carroll's place in the Leitrim GAA pantheon is overshadowed by the achievements of his successor John O’Mahony but without Carroll setting the groundwork, his cajoling, inspiration and drive, what happened in 1994 wouldn’t have happened without the Cavan man. The same could be said for Andy Moran and Terry Hyland - the Mayo man is inspiring the county and getting huge buy-in from Leitrim’s players but Hyland’s blunt insistence on high standards prised the door open for Moran and showed a generation of players exactly what they need to do.

But back to Dennehy’s chat with Kelly as Feidhlim expressed some pretty strong opinions about funding that would enable some already world class coaches to work full-time in the field  and where all the money coming from Sports Ireland is going exactly.

Two quotes in particular stood out: “Athletics is still very much the GAA (amateur), except GAA is better because they appreciate their coaches better and reward them better” and, “There's all this talking around the houses but nobody wants to pick up the shovel. The coach is the one with the shovel. Sport in Ireland is developing into the HSE -  nobody is accountable” - strong and thought-provoking  stuff!

The reference to the GAA is interesting - from the outside, Athletics is the sport with a professional arm and the GAA the amateur organisation where everything is done on a voluntary basis, but the reality, as we all know, is vastly different.

We’ve all heard the rumours about GAA coaches earning thousands of euro  but a coach like Kelly, who had five athletes competing at the European Championships or someone like former Meath GAA Director of Coaching John Coghlan who  guided Puerto Rica's Jasmine Camacho-Quinn to the 100m hurdles gold medal in Tokyo, struggle to make ends meet in this country.

The dichotomy between Kelly’s plight and the gossip I’ve heard during this season of GAA inter-county managerial changes is truly stunning with one reported package for a manager that I’ve heard over the last few days, if true, bordering on the obscene.

Many will shrug their shoulders and say ‘what harm’ and ‘fair play to them if they can get it’ but it's not too long ago talk spread  of a club having to raise a fundraiser ahead of a County Final just so they could pay the agreed bonus just in case their team was successful.

I’m not casting aspersions on anyone  and this is certainly not a case of whataboutery - a labourer is worthy of his hire and I’ve no problem with any GAA club compensating a manager for their expertise regardless of whether they win or lose - it's their money to spend as they see fit but the contrarian in me wonders about the morality of clubs and indeed  counties devoting so much time and effort and money to meet the cost of employing, yes I said employing, a manager with little or no guarantee of success.

It is not an easy needle to thread - whatever about the GAA who have a much greater ability to source funding for coaching, our minority sports demand expert coaching to compete on anywhere near an equal footing with the world's best  and that costs.

How to fund that coaching expertise is the problem - the GAA  looks to their own community with a myriad of initiatives from lottos to 'win a house'  but that’s not perfect  as Dublin, Mayo, Galway  and Kerry have  access to the sort of funding Leitrim can only dream about and from what I've heard, some  of the super clubs around the country  comfortably exceed what Leitrim  bring in so that gives you some idea of the handicaps our minority sports labour under.

If the GAA is struggling to meet costs, what are the choices facing coaches like Feidhlim Kelly and the legions like him around the country who give so much of their time and energy towards guiding Ireland's best towards achieving their dreams of glory. Ideally, the Government should step in but in this financial climate, would expenditure on sporting coaches be tolerated when so many people are struggling to make ends meet and hospital waiting lists and the housing crisis remain so alarming?

So the question must be is all this expenditure on one or two people worth it? The evidence says yes but that leads to  problems as living costs are going through the roof and you wonder when the bough will break. Many are reluctant to get involved with clubs nowadays because once you’re in, you’re locked into a never - cycle of fundraisers, raffles, draws, concerts, novelty events, church gate collections, etc, etc, etc.

Hunting businesses for sponsorship or chasing around for club lottos is not going to be easy in the coming months but what price are you willing to pay for the possibility of success?