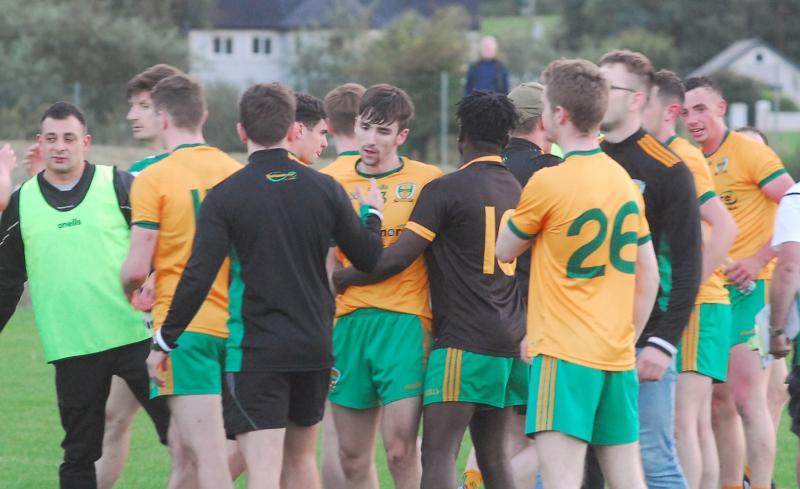 Ballinamore Sean O'Heslins' players celebrate after their dramatic victory over Mohill in the last round - who will be celebrating on Saturday evening? Picture: Willie Donnellan

Somebody better tell Eircom or O2 and Vodafone that there is going to a massive demand on their internet services next Saturday evening from about 6 pm to 7.45 pm as fans up and down this fair county of ours are going to be desperately trying to find out exactly where they stand in the battle to reach the Connacht Gold Leitrim Senior Championship playoffs - and avoid the dreaded relegation series.

For the neutral, this is the best possible scenario heading into the final round of group games with nobody sure of who will go directly into the semi-finals, who will jump an opponent into the quarter finals or who might drop into the dreaded relegation spots - hence the reference to internet service providers as fans will  try to keep up to date what is happening and how it affects their team.

The real killer here is that your team might still get the result they need but lose out because somebody else scores a landslide win as scores for and against could determine your fate - hence the need for the old abacus!

In terms of drama, this is top notch stuff - only Melvin Gaels and St Patrick's Dromahair can be said to have nothing to play for but that's not exactly true as a win next Saturday might just give the victors a slightly easier route through the relegation playoffs that take place just a week later.

Here's what we know right now - Fenagh St Caillins and Leitrim Gaels are both definitely in the playoffs. Both occupy the automatic semi-final places right now and a draw would see them keep those places. Defeat could see the loser leapfrogged by any one of Ballinamore Sean O'Heslins, St Mary's Kiltoghert or Aughawillan providing they do enough on the scoreboard to change their scoring difference.

But all three teams chasing that semi-final spot are on the road and face  a team desperate for a win that could get them into the quarter finals and that is where the drama really  starts.

The most eye-catching of the three contests is in Philly McGuinness Park where Eamonn O'Hara's team could be consigned to the relegation playoffs if they don't get a win over Aughawillan. For the Willies, a loss could see them dumped right into the relegation mire so the stakes are huge but a draw, let alone a win could be enough to see them safely into the quarter-finals.

Both Glencar Manorhamilton and Gortletteragh need big wins against Ballinamore and St Mary's respectively with the north Leitrim men having a huge advantage in terms of scoring difference over Gortletteragh and Aughawillan so they'll be looking for a Mohill win and a win in Boggaun and to reach the quarter-finals.

That is where I have a problem with the new system in that teams who won't have faced each other and who have played completely different teams will find their seasons decided by scoring difference against teams they won't have played - a system  is perfect when everybody plays  under the same conditions so there  nobody can say they were disadvantaged or given a handy draw to the playoffs.

I've got to admit I do like the new system but for that flaw  - it is dramatic, exciting and it has led us all to a denouement that will have us all on the edge of their seats. And it would work perfectly if there were just eight teams in the Senior grade as the spread of quality among the teams wouldn't be so vast - look at the intermediate grade for proof and even there, we have a few teams cut adrift.

But all that's for another day and my only advice right now is to make sure you have your mobiles and tablets fully charged next Saturday so you can keep track of everything.

We take a brief look at the five games next Saturday:

With the table as it is, you’d think only one winner here but at home, Glencar Manorhamilton are tricky opponents and the County champions have struggled in the past to get by the north Leitrim men. They won't relish the journey to Boggaun even if the manner of their win over Mohill has lifted them emotionally.

You sense that Ballinamore are struggling to reignite the fire that drove them to the title last year and the loss of Dean McGovern is surely going to be felt at some point. Will it be next Saturday? Hard to know but the fact that Glencar Manor are relying on the considerable but very youthful talents of Barry McNulty tells you that they are still in a rebuilding phase.

Tom Prior will be sharper after his layoff and you've got to think the champions should emerge with the victory here as they chase a semi-final place.

These teams fought out a fantastic draw last year but they are vastly different teams now and going in different directions. St Mary's had an incredible ten players under the age of 21 start in their win over Ballinamore as the Carrick men seem to have found something deep within themselves in their win over the champions.

Gortletteragh have been decimated with retirements and injuries and have been forced to introduce a lot of young players. They've been struggling but still possess that warrior spirit but there is no doubt they'll be praying for a fully fit Jack Heslin to enter the fray here. But it is hard to see them overcoming a motivated St Mary's in this one.

This would normally be the game of the round and it probably still is in a strictly performance sense but the fact that both are already through might just dilute the drama. Both teams are unbeaten and they have a history at intermediate level while the Gaels knocked Fenagh out of the quarter finals last year - it all adds to the drama as the winner will seal their place in the semi-finals.

On scoring difference, Leitrim Gaels are that little bit more vulnerable to losing their semi final place but Fenagh will want to drive home the message that this is their year. Fenagh's defence coped with Keith Beirne but face a physically imposed Gaels team with a bit more pace and an improving Enda Moreton. I really don't know how this will go but I'll give the nod to Fenagh.

This is a monster game purely because of the almost unfathomable notion that Mohill could be knocked out of the championship if they don't win.  And Aughawillan would like nothing better, sealing their own place in the playoffs into the bargain.

It is a tough one to call - normally you'd go for Mohill without hesitation but they've lost two in a row and don't seem to have the same defensive resilience we've been used to seeing from them. If they get that right and Keith Beirne recovers from an unusual off day, you'd have to fancy them but Aughawillan are nobody's idea of a  cakewalk.

Aughawillan's resources aren't as deep as they once were but their core is quality. They are waiting for Mark Plunkett to explode into life while Pearce Dolan has been immense all year. With their scoring difference, Aughawillan have to get at least a point - that desperation will drive them on but you expect Mohill's desperation might be that little bit more powerful on Saturday.

This isn't quite a dead rubber as we've said earlier but it wouldn't be a surprise if both teams were looking towards the relegation semi-finals a week later. If anybody is carrying a knock, they might be tempted to rest them so they'd be ok for the relegation battle. Form is hard to call but with home advantage, Melvin Gaels probably have a slight edge here.