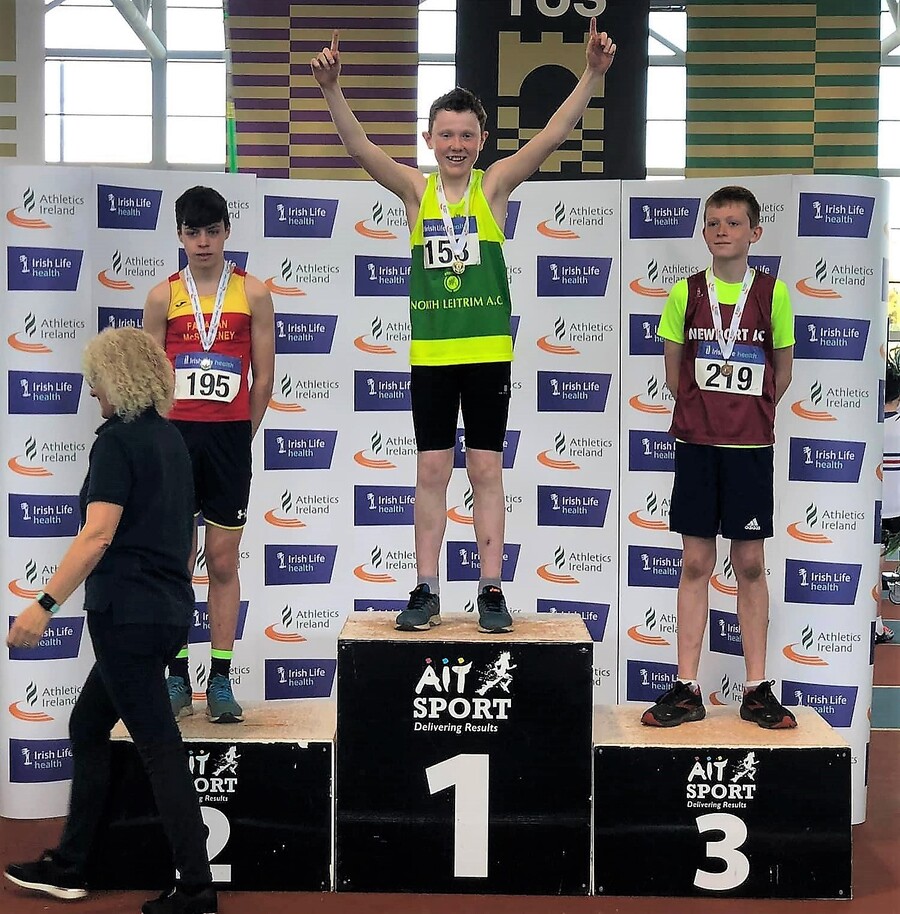 Scott Williams took home two medals from the championships in Athlone as the North Leitrim AC athlete combined an unusual double with gold in the U13  shot and silver in the hurdles.  His performance in winning the Shot saw him register a distance of 10.04m, nearly three quarters of a metre clear of the second placed athlete Sean Riordan who threw 9.38m, an impressive level of dominance on the day.

In the 60m hurdles, Scott finished second in his heat behind eventual winner Alan Hallinan of Craughwell, his time of 10.46 ranking him fourth going into the final. However, Scott improved dramatically in the final, clocking 10.11 behind Hallinan's 9.93 and just two hundreds of a second ahead of third placed Adam Kelly of St Abban's.

Sarah Mulvaney Kelly followed up her strong displays in the Connacht indoors by setting a new championship best performance when she clocked a time of 4.47.97 to take the gold ahead of Moy Valley's Lillian O'Brien who clocked 4.55.46.

Sarah would also finish an excellent fifth in the 800m in a time of 2.30.58 after clocked a time of 2.25.03 in the final with all athletes turning in slower times in the final after punishing exertions in the heats on the same day. She also finished eighth in the shot with a throw of 9.19m on a very busy weekend.

Luke Fitzmaurice had the joy of winning a silver medal in the U16 walk mixed with the agony of losing out on the gold medal by two hundreds of a second as Moy Valley's Seamus Clarke prevailed over the North Leitrim walker in a time of 6.57.94 to Luke's 6.57.96 - an incredibly small margin. Luke also competed in the Shot where he finished 11th with a throw of 9.63m.

Rachel Keaney was also among the medals as she claimed bronze in the U18 Girls walk, her time of 9.16.33 giving her third spot behind two strong Dublin walkers.

The walks also saw North Leitrim's Keefe Dolan finish sixth in the U14 boys event in a time of 5.54.09.

Carrick AC's Anna Trench Winston set a new personal best of 4.01m when she finished eighth in the U14 girls long jump, improving by nearly 30 centimetres.

Mark Haslette suffered disappointment in the U15 60m hurdles when he clipped the third hurdle in his heat while in the second qualifying position  and took a fall. The Drumkeerin youngster still managed to finish the race but it was a tough blow to the talented hurdler.

Also in indoor action, Ballinaglera native Michael Cornyn claimed a silver medal in the USA Masters Indoor Championships last weekend at the Armory Track in New York. Running his fastest time of the year, Michael clocked 63.00, a time good enough to take the silver medal in an event run on time over three different heats.