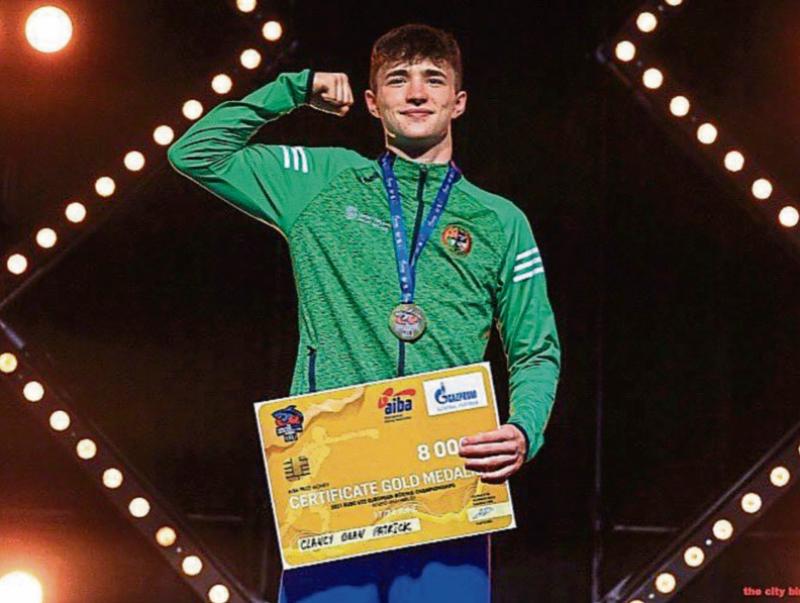 Manorhamilton will be the place to be next Saturday night if you are a Leitrim boxing fan as the town welcomes new European U22 63kg champion and Sean McDermott Boxing clubman Dean Clancy back to the town.

The son of Manor native Jason Clancy, Dean finally got his hands on a coveted gold medal last Thursday at the European U22 Finals after winning silver medals in the Junior and Youth championships in the past.

Commenting on twitter after receiving his gold medal, Dean wrote “Thanks so much for the support over the past few weeks! Dream come true last night being crowned champion of Europe. Well done everyone! Was a fantastic trip, made friends and great memories past few weeks. Excited for the future #paris2024.”

At the time of going to press, the plan is for supporters to meet up at Boggaun on Saturday night at 9.15pm before a tour of the town and then an outdoor presentation at the Castle as Manorhamilton honours Dean’s fabulous achievements once again.

Dean didn’t actually have to fight to win the gold medal after his Israeli opponent Ahmad Shtiwi conceded a walkover to the Sligo fighter on Thursday at the championships in Roseto degli Abruzzi, Italy

The Sean McDermott fighter has been one of the tournament’s standout operators, winning four bouts from the first day to the tournament to reach the decider. He accounted for Pete Novak of the Czech Republic, #3 seed Nenad Javanovic of Serbia, Lounes Hanraoui of France 3-2 and home fighter Matteo Ara en route to the final.

Clancy joins none other than Jason Quigley and two time winner Amy Broadhurst as Irish European U22 gold medal winners.

Manorhamilton's Sean McDermott BC- fighter Dean Clancy from Sligo fights for place in European 63 kg Final at 5.15 on Tuesday
ADVERTISEMENT - CONTINUE READING BELOW