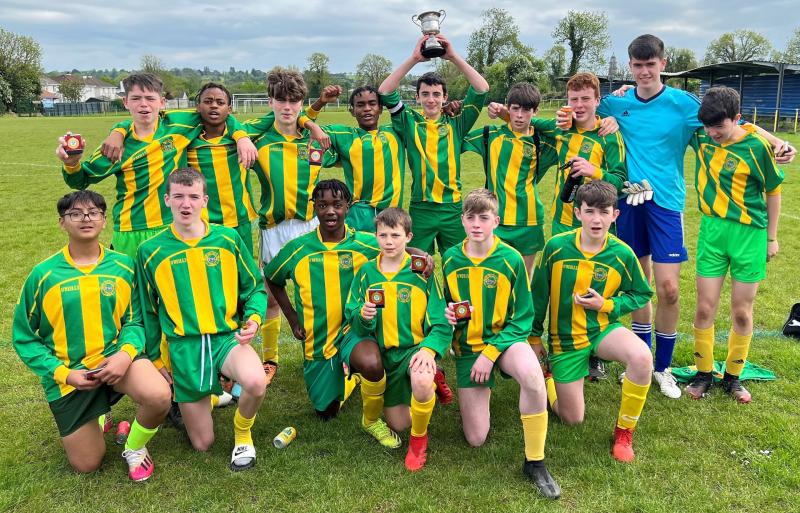 Abbey Rovers claimed another Longford & District title last Sunday when they prevailed against Inny FC after a dramatic penalty shoot-out to win the U16 Premier Division Final.

Abbey, who topped the table but suffered a loss at the hands of Inny earlier in the season, had the better of the first half with good play from captain Mark Ahern, Bradley Cowdell and Killian Mulvey but were unable to get the breakthrough.

The second half followed the same pattern of the first with Michael Keegan sniffing out the danger on a few occasions with good displays from Mark McNiff and Killian Mulvey and with 15 minutes left, top scorer Zead sprung the offside trap to fire Abbey into the lead.

However, Inny hit back quickly to halt Abbey’s celebrations to draw level and keeper Andrew Lee had to make a couple of vital saves. Mark Ahern went close to winning the contest as he saw a late effort hit the Inny crossbar but the game headed to extra-time.

The Leitrim lads took the lead in first period of extra time with Zead scoring from the rebound after his initial penalty was saved but Inny equalised in the second period of extra-time when substitute Simone Tosali sent the game to the dreaded penalty shootout.

In the shootout, Zead, Mark Ahern, Bradley Cowdell, Darrach Leach all scored their kicks for Abbey before keeper Andrew Lee made a great stop to give the advantage to the Leitrim lads. That left Killian Mulvey with the final kick to win the game and he made no mistake, scoring in style to start great Abbey Rovers celebrations.