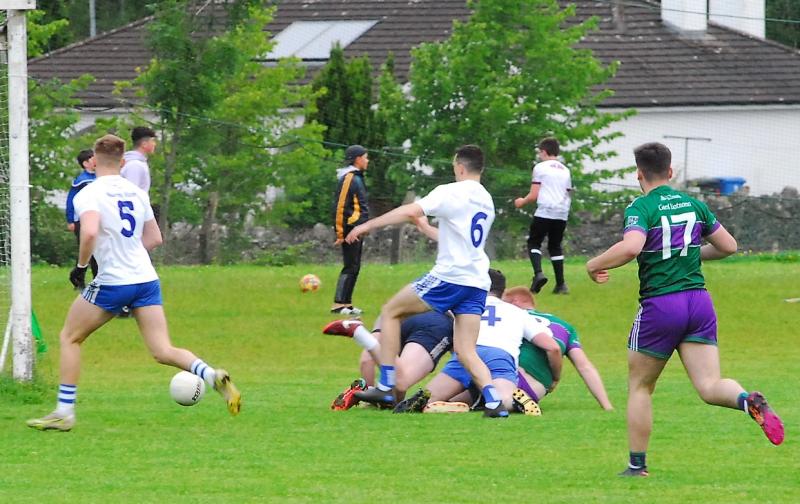 Colm Moreton is taken down by the St Mary's defence at the expense of a penalty Picture: Willie Donnellan

Just as they did in last year’s championship, St Mary’s produced a furious late rally to snatch a draw with their fellow parishioners Leitrim Gaels in last Saturday’s Masonite Division 1 clash in Pairc Naomh Mhuire.

The two fierce local rivals played out an entertaining draw, which was probably the fairest result as both teams had chances to win it in the closing stages as the town team again recovered from a big deficit late on in  a game to snatch a draw.

The Gaels led by five points after Stephen Goldrick converted a penalty following a foul on Colm Moreton but St Mary’s finished by far the stronger with points from Jack Casey, Adam Reynolds, David O’Connell and sub Paul Keaney to snatch a draw.

With neither team at full-strength, both will take plenty from this encounter as they look forward to the championship.

Aidan Flynn opened the scoring for the Gaels in the first minute but it was St Mary’s who got the better start with Leitrim U20 player Jack Casey pointing before David O’Connell blasted home a goal to give the home side an early advantage.

The Gaels weren't rattled and  fought back to level the scores with two Stephen Goldrick frees and another for Aidan Flynn before Gavin Reynolds and Conor Guckian swapped efforts. The tit for tat continued with Goldrick and Casey on target before a point, disputed by St Mary’s, was registered by Colm Moreton to leave them 0-7 to 1-3 ahead at the break.

O’Connell and Goldrick swapped early points before Casey drew St Mary’s level, However, it looked as if Leitrim Gaels were taking control when Colm Moreton was taken down after fielding a high ball into the danger area with Goldrick slotting the penalty to the net.

Goldrick tapped over a fine point before Moreton claimed a fine mark to score and stretch the lead out to five points.