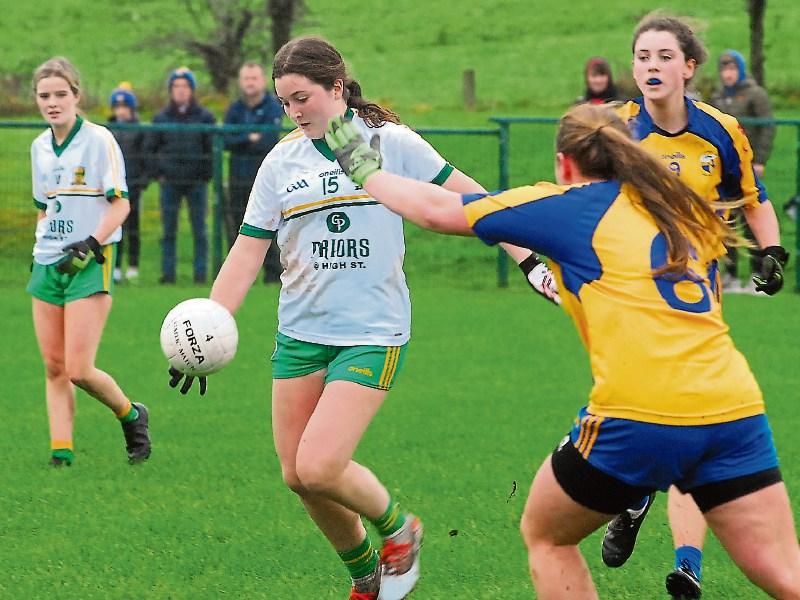 It may have been a cold, wet winter day but that wasn’t enough to stop Ballinamore Sean O’Heslin’s and Glencar Manorhamilton serving up a brilliant game of football in the Gotham Drywall Leitrim Ladies Minor A Final in Fenagh.

Ballinamore looking to win their first ever 15-a-side underage title and Manorhamilton trying to regain the crown they last won in 2017.

Early doors it looked like it could be one-way traffic with Ballinamore camped in the opponent’s half for the first ten minutes. Lily Byrne got her side off the mark with a well-taken point after three minutes and that was closely followed by points from the lively Lucy Murphy and captain Niamh Donohoe.

Ballinamore pounced for the first of the game’s seven goals with Lily Byrne getting on the end of a well-worked team move to blast the ball past Jessica Kerrigan. Byrne followed up with two points in the next few minutes, including one from a free.

Glencar Manor’s first major attack was turned over by Megan McGovern who charged up the length of the field solo before driving a shot against the crossbar. Luckily, the ball broke kindly for Lily Byrne who struck for her second goal, leaving Ballinamore ahead at the ten minute mark by 2-5 to no score.

A frantic few minutes followed as Glencar Manor struck with two massive counter-attacks, Cliodhna Boylan scoring a brace of goals either side of another Lily Byrne point from play. The first of the Manor goals was an expertly taken soccer-style finish from range, the second was another sweeping move from back to front that had the Ballinamore defence at sixes and sevens.

The second quarter was less action-packed, Ballinamore feeling the pressure with a number of missed goal and point opportunities but they still outscored Manor by 0-4 to 0-2, Megan McGovern scoring two from play, Niamh Donohoe and Lily Byrne grabbing one each, with Emily Conlon finding the target twice for Manorhamilton.

Down by 2-8 to 2-2 starting into the second half, Glencar Manorhamilton made a couple of introductions from the bench and got their next score within a minute, Emily Conlon registering another onto her personal tally with a fine score to edge her side closer still.

Ballinamore responded well, Lily Byrne nabbing another two points and sandwiched between those was the score of the game from Lucy Murphy, who gathered the ball on the 45, spun her marker and charged all the way into the box before unleashing a rocket of a shot between the goalkeeper and the post.

But Glencar Manor replied with an unanswered 1-4 as they relentlessly attacked the Ballinamore defence. However, the game’s big turning point was Chloe Murray’s superb penalty save which inspired her teammates for the final quarter.

Having gone 18 minutes without a score, Ballinamore lifted the siege when Lucy Murphy won a huge free for her side, Lily Byrne pointing, and that was followed up by a Niamh Donohoe free to put O’Heslin’s ahead by seven with five minutes left to play.

Emily Conlon hit back for Manor but Ballinamore finished strongest through Megan McGovern’s massive score a minute into injury time and another minute later, Claire McWeeney broke free of the defence to smash home her side’s fourth goal and leave the result beyond any doubt.