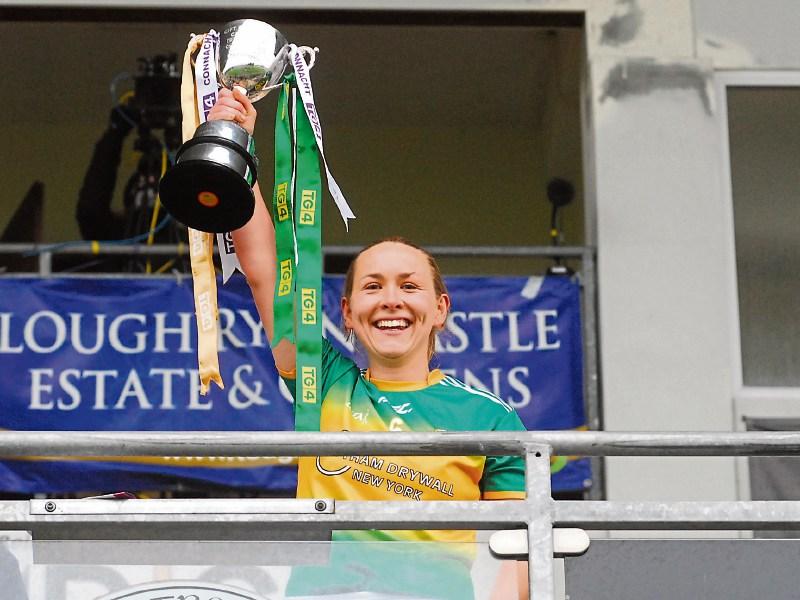 Leitrim won their first piece of silverware at adult ladies level in five years as they produced a fantastic second half display to overcome a dogged Roscommon in the 2021 Connacht LGFA Intermediate Championship Final last Sunday in Avant Money Pairc Sean Mac Diarmada.

After huge improvement under the leadership of Hugh Donnelly, Leitrim finally have something tangible to show for their efforts with the heartbreak of last June’s Division 4 Final cast aside last Sunday, the victory a massive boost as they set their sights once more on the 2022 campaign.

The timing so close to Christmas and a bitterly cold wind meant that conditions were hardly ideal but both teams produced an entertaining and high quality encounter with Leitrim’s strength off the bench proving crucial in a second half where both teams missed some glorious chances.

Level at the break, the game descended into something of an arm wrestle with neither side really able to break free of the other. But the arrival of Mary Alice Maguire, Megan McGovern, Roisin Fowley and Leah Fox into the fray either side of halftime gave Leitrim massive impetus.

Another Fleming goal nine minutes into the second half gave Roscommon the edge but with the teams level at the three quarter break, two quick fire points from Michelle Guckian and debutant Megan McGovern opened a gap that the Rossies simply couldn’t close.

In truth, the final margin of victory should have been far more comfortable as Guckian, along with subs Leah Fox and Roisin Fowley wasted three great goal chances that would have put a more accurate reflection on Leitrim’s dominance.

Leitrim had the early pressure with Laura O’Dowd and Vivienne Egan foiled with early efforts before a short 50 routine ended with Roisin McHugh firing over from distance. A Siobhan McCartin intercept led to O’Dowd combining with Siomha Quinn to add a second point.

Roscommon replied with a Rebecca Finan free but a high ball into the Roscommon danger area saw Laura O’Dowd pass over the top for Egan to score. But then Roscommon started to find some form with three points in less than two minutes from Laura Fleming (2) and Caroline Conway.

Leitrim’s response was emphatic with Laura O’Dowd soloing through from the halfway line with nobody able to get near to him before a classy finish to the both corner of the net. That put Leitrim two up but barely 30 seconds later, Roscommon had the ball in the net, Laura Fleming finishing off an excellent move to get the visitors back in front.

Roscommon were starting to dominate and points from Lisa O’Rourke, Rosie Lennon and Fleming, with Michelle Guckian hitting a free in response, left them three points up with four minutes left in the half.

Leitrim also lost corner-back Siobhan McCartin for ten minutes after she was yellow carded for a flying challenge that resulted in a clash of heads with Saoirse Timon, the Roscommon player forced from the action.

The necessary added time proved vital - Roisin McHugh scored a good point from a tight angle and when Leitrim attacked again, Siomha Quinn’s superb pass found Laura O’Dowd charging through at speed and she buried the ball in the net.

Roscommon hit back with a good point from Rebecca Finan meaning the sides were level at the halftime break, Leitrim’s 2-5 to Roscommon’s 1-8. The second half was much slower to get going although Michelle Guckian did put Leitrim in front after just 25 seconds.

Roscommon were creating chances but not taking them until great work from Lennon created the opening for Laura Fleming and she blasted the ball to the net for a two point lead.

Incredibly, Roscommon were not to score for the rest of the game as both sides were guilty of wasting some great chances. Sub Roisin Fowley quickly cut the gap to a point after good work from another sub Mary Alice Maguire but Leitrim should have been back in front when Michelle Guckian broke through but keeper Helena Cummins made a comfortable save.

Guckian also put a free off the post but Leitrim won the ball back and another free, Guckian tying the scores on 13 minutes. The Leitrim sharpshooter had another bad wide from a free just before the second water break.

That water break proved crucial with the sin-binning of Roscommon midfielder Lisa O'Rourke just before Mel Kenny called time. It was a huge advantage to Leitrim in the final quarter as Roscommon lost momentum in their battle to get back into the contest.

However, a foul on sub Leah Fox gave Guckian the chance to edge Leitrim in front on 16 minutes and the Kiltubrid player took it. Fox then helped create another score a minute later for another sub Megan McGovern, the Ballinamore girl turning around Roscommon’s dominance in the middle of the park after she was introduced three minutes before halftime.

The final ten minutes were more a tale of missed chances with both teams guilty. Michelle Guckian did convert after a short free routines but two wides from Guckian and one from Megan McGovern meant Leitrim could never relax.

Hugh Donnelly’s troops should have wrapped it up but Leah Fox and sub Roisin Fowley were both denied certain goals by Roscommon keeper Cummins.