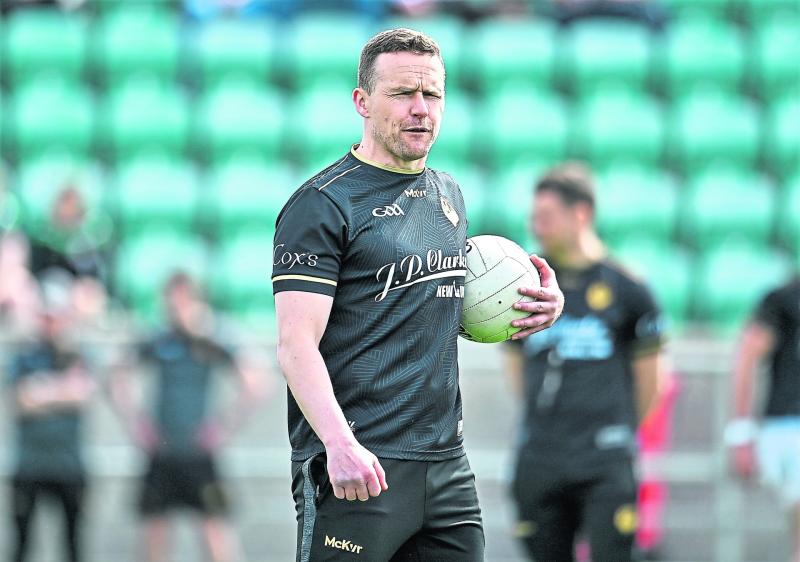 Andy Moran pictured before Leitrim's game with London in Ruislip - the Leitrim manager hopes the Green & Gold can continue their good away form against Galway next Sunday Picture: Sportsfile

Enthusiasm for a trip to Pearse Stadium might seem in short supply among Leitrim fans but if there is one man relishing the long journey to Salthill next Sunday, it is Andy Moran as the Green & Gold manager seeks to build on Leitrim’s excellent record on the road in 2022.

Many had been hoping Mayo would prevail in the clash of the titans, a result that would have given Leitrim home advantage for Sunday’s Connacht Senior Championship Semi-Final (3.30 pm throw-in) but when Padraic Joyce’s team prevailed, it means Leitrim are on the road once more - not that Andy Moran minds one little bit!

“We’ve done really well on the road this year, it is something we are looking forward to and we’re really excited about,” Andy told the Observer, “It is funny because we’ve only had two games in Carrick this year with the way it's worked out.”

With the London League game switched to the Connacht GAA Centre of Excellence, Leitrim have only played in Avant Money Pairc Sean Mac Diarmada twice this year but Leitrim have turned in some of their best performances this year away from home.

In fact, Andy is banking on Leitrim supporters showing up in big numbers in the way they did in venues as diverse as McGovern Emerald Park in Ruislip to Semple Stadium and Netwatch Cullen Park - “Yes, I do expect a Leitrim crowd to travel - there is a real momentum and excitement about this team building and just fingers crossed, they come and support us.

“London was like a home game for us, it was an absolute pleasure to meet the guys over there, the McGoverns, a real bonus for our trip, all the supporters who were there, the real pride in the county, the cheer that went up when Ryan scored that last goal, it was amazing.

“To be honest with you, support has grown all year. We went to Tipp and you could see the yellow 50 Miles in January hats dotted around the place. We were in Carlow and Waterford and by the time we got to Carlow, there was a brilliant Leitrim crowd there.”

So good have Leitrim been on the road that the Leitrim manager wonders if their home performances could have been better: “I thought we performed well against Cavan but when I looked back on it, I thought we were probably over-cautious to the strength we have and gave Cavan too much respect that day.

“We came out of the game, we were probably reasonably happy with our performance but as the League progressed, we realised we should have really gone at them that day. Wexford, we did well, we had a great win but we thought we could play better than that. “

Coming through the crucible that was McGovern Park in Ruislip will serve Leitrim and it is obvious Leitrim’s manager has been absorbing the lessons learned that day: “We were fortunate enough to sit down and have dinner with the London lads after the game and they were just saying that was the best prepared London team ever. They were waiting two years, preparing for Leitrim to come over and seeing us as a potential scalp and they were quite impressed with the way we dealt with that.

“The big lesson for us is that when we were under that mental pressure, I think we played really, really well in terms of that 65 minutes when the pressure was really on us, our positioning, our tackling, our shooting - we got 3-7 off our full-forward line Donal Wrynn, Ryan O’Rourke and Darragh Rooney, a great return.

“When the mental pressure was on, we did great, even when they came back to a point - I thought we reacted well to it. But when that pressure came off, when we were eight points up, then our structure went, our tackling went, our shot conversion went so I do think our lads do react really well to the pressure.

“That is what we will be trying to recreate, a tiny bit of pressure for next Sunday and hopefully the boys react as well as they did against London.”

Neither does the former Mayo Footballer of the Year expect Galway to take their eye off the ball after coming through their own crucible against Mayo. When asked if Galway might take Leitrim for granted, Andy replies “With Padraic Joyce, Cian O’Neill and John Divilly there, I doubt it but there is that element where they had to peak for the Mayo game.

“They have two weeks to get their bodies right, it will be light training for them and within that there are opportunities for teams like ourselves going to Galway. “We know we play really well on the road, we’re really excited about getting to Galway, staying there, sampling the pitch and then playing on a fabulous pitch against a really, really good team.

“But we’re under no illusions, we’re just looking at our own performance - how can we do better than we did last year against Mayo? How can we show that we’re improving, how can we really show the strengths of our team? If Galway play really well, they play really well and if they don’t, hopefully we can do some damage to them on the scoreboard.”

Top scorer Keith Beirne is available for selection once more after missing the London game due to suspension but Leitrim’s manager is one who likes to tailor his team to the challenges the opposition pose: “It is a selection headache anyway but it is completely different teams and we need to respect the opposition for each game.

“Even if Keith was available for both games, there would be selection headaches because you do need to adjust playing against different teams, to cope with the running power of a Galway - you need to put in fellas that can live with that and the fellas that you think can do damage to the other side, you need to have them in.

“There are a few selection headaches, which is great,” added Andy, “We have 36 fit players which is amazing, a testament to our medical team who have done great work and our S&C coach Daithi McCabe who has done great work throughout the year. Isn’t it great for Leitrim to be going to Pearse Stadium with 36 players to pick from and 36 players me, you and the Leitrim public would rate very highly!”

As for his targets against a highly rated Galway, Andy is realistic but believes next Sunday's semi-final can be the start of something special for Leitrim: “Everybody talks about winning and losing but what supporters want is a performance from their team and I’m hoping that we can give them that, something they are proud of and if that leads to something, great. But we’re looking at this long term and hopefully this is the start of something for us.”