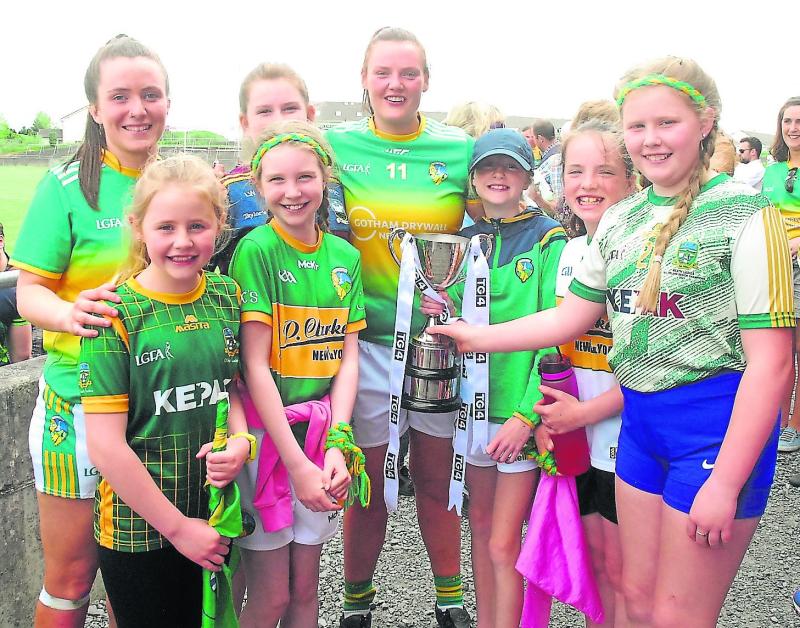 Sitting up in the antiquated if charming old stand in St Jarlath's Park in Tuam last Sunday, chat among the journalists turned, as it usually does on these occasions, to how Ladies Football could teach the GAA a lesson or two about inter county gaelic football structures!

It is a timely conversation with the launch of the Tailteann Cup last Monday, a competition already derided by media, counties and even some players but you'd only have to spend a few minutes in Tuam last Sunday to be convinced of the absolute imperative for a properly graded structure in the men's inter-county.

Seeing the joy on the faces of the Leitrim players as delighted supporters celebrated the moment with abandon left me wondering wistfully if our men's teams will ever have the same opportunity to savour a success at provincial level.

That isn't waving the white flag for men's teams at inter-county level - reporting on Declan Darcy lifting the Nestor Cup back in 1994 was one of the great privileges of my career but, right now, with the way the inter-county game has gone and the way the big counties have organised themselves so that they just don't get caught any more, I genuinely wonder if I'll ever see those days again.

Think that's an exaggeration - well look at the stats over the last ten year - since Leitrim lost 2-12 to 2-9 to Roscommon back in 2009, Leitrim's only victories in the Connacht Championship have come against London or New York.

Discount those ties involving the Exiles, including the nightmare of 2013, the average losing margin for Leitrim teams over the last ten campaigns has been 15.6 points with three losses of over 20 points in that time. Strangely, I distinctly remember the disgust among Leitrim fans back in 2014 and 2015 when we lost to Roscommon and Galway by the grand total of eight points on each occasion!

It must be soul destroying for Leitrim's players to face into the Connacht Championship each and every year with three Division 1 standard teams there waiting to bludgeon their hopes and dreams into oblivion - contrast that with what Leitrim Ladies who each and every year can genuinely aim for glory at intermediate level.

With only one team getting promoted to Senior each year, it takes an All-Ireland win to go up a grade so teams aren't been slaughtered the way so many men's Division 3 & 4 teams have been so far this year in the championship. Ladies teams have time to build, to develop and get stronger - just look at Meath who reached three All-Ireland Intermediate Finals before finally winning and then the next year, they won the Senior crown.

Leitrim's glorious year of 1994 was firmly rooted in an All-Ireland B title in 1990, two successive promotions in the league, a Connacht U21 title in 1991, Leitrim club teams contesting three Provincial Finals as well as a Fr Manning Cup win and two appearances in Connacht Minor and U21 Finals so the blueprint is there for success at adult level - build yourself up through the levels until you're ready to compete.

That's what the Tailteann Cup is intended to address and if there are problems with the new competition, it is that the changes haven't gone far enough - even the name is a bit of a misnomer, far better if it was called the All-Ireland Intermediate Championship. It lends a bit more gravitas to a competition that will have a huge, and hopefully, positive effect on over half the counties lining out in inter-county football.

There'll be a new, better format next year with three guaranteed games and the split at League level will be somewhat different but those changes are desperately needed and needed now!

Ladies Football leads the way - Leitrim and Roscommon fought out a thrilling contest last Sunday in Tuam, precisely because they're operating at the same level. The Rossies won promotion to Division 2 this year but in the championship, the gulf between Division 3 and 4 is not so great that competitive and compelling fixtures can't be staged.

There was nothing remotely competitive or compelling in Pearse Stadium just 10 days ago, nor was there in Mac Hale Park 12 months ago but Leitrim against London on Easter Sunday was everything you could want from a championship match - two evenly matched teams fighting as if their lives depended on it.

If we're being truthful, and we try to be in this column, for those who proclaim that the Ladies are showing the men's teams a thing or two, Leitrim Ladies would have suffered a similar mauling had they come up against Galway or Mayo at adult level - the gap is just as daunting in the Ladies game as it is in the mens.

Think I'm being harsh? Cast your mind back to last December when a superbly drilled and immensely talented Glencar Manorhamilton took on Galway's Kilkerrin Clonberne in the Connacht Ladies Senior Club Final. The Manor women are a class apart in Leitrim and they took the game to the Galway side and fought with every ounce of their being to trail by just three points at halftime.

But just like Andy Moran's side experienced in Salthill, the second half was a chastening affair as the Galway side waltzed their way to a 4-22 to 1-6 victory. Recounting those facts isn't a pop at the Manor outfit, they're an incredible outfit but it is a reminder that there are different levels of excellence in all sports and determined as the north Leitrim women are to get there, it will take time.

That's the beauty of the LGFA structure - Galway or Mayo or Dublin or Donegal would blow Hugh Donnelly's side out of the water and again, that's not denigrating anyone. Meath did it about eight months before they shocked the Dubs to win the Senior title but first they came through the Intermediate grade and that is where the foundations for their historic success in 2021 were laid.

Leitrim Ladies have something tangible to play for each and every year in championship football and on their day and at their level, they are a match for the best in the country. Keep an eye out for them in the championship but it is way beyond time that Leitrim's mens teams have the same opportunity to chase glory on the right stage.