Champions Ballinamore roll on ominously as they push past Glencar Manorhamilton 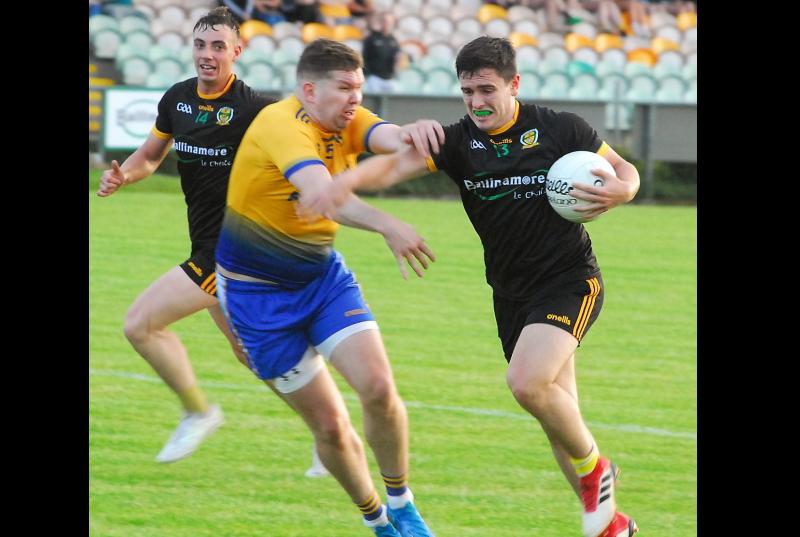 Ballinamore Sean O’Heslins easily saw off the challenge of visitors Glencar Manorhamilton in last Friday’s Masonite Division 1 clash on what was probably the first real summer like evening of the year on Friday in Sean O'Heslin Park.

A Shane Moran Ballinamore goal on the 11-minute mark put Ballinamore in command of the game. Glencar Manor stayed fairly well in contention for most of the opening half but still found themselves six points adrift at the interval.

Ballinamore  sank any hopes that Glencar Manor had of turning the tables right after the restart when Mark McGrory struck for a goal seconds after the throw-in from a well rehearsed and executed move.

It took some alert and good goalkeeping at opposite ends of the field to deny goal chances that fell to both Ballinamore and Glencar Manor in the opening two minutes of the action. Anthony McDonald was well tested before he safely handled a goal bound shot from Ballinamore's Shane Moran soon after the throw-in.

Shortly afterwards Ballinamore's Darren Maxwell proved equally up to the task at the other end when he prevented what seemed like a certain goal when Barry McNulty fired from close range towards the home-side's net.

Ballinamore settled down quickly following that and put three points on the scorecard by the fifth minute. Luke Murphy converted a free and then fired over from play while Wayne McKeon also hit the target from play.

A foul on Glencar Manor's Barry McNulty was punished by Aaron Hickey and shortly after McNulty punished another foul on Hickey by converting a free.  With the gap reduced to the minimum, Ballinamore responded determinedly and stretched their lead to six points by the 12th minute.

Glencar Manorhamilton reduced the deficit by the 17th minute after Barry McNulty fisted over a goal chance and Donnacha Devaney added a point. Before the interval Ballinamore responded with points from a Luke Murphy free and from a Shane Moran mark to lead 1-7 to 0-4 at halftime.

Ballinamore got off to a dream start after the resumption when the lively Mark McRory fired to the Manor net having been put through by an inch perfect final pass from Shane Moran.

Glencar Manorhamilton responded positively to this early second half set-back with three points by the 36th minute as Aaron Hickey (2) & Barry McNulty were both on target from placed balls.

Dylan Beirne and Wayne McKeon stretched Ballinamore's advantage to eight points with good scores by the 48th minute and kept the home-side assuredly in the driving seat. Manor reduced the deficit slightly by the 50th minute after Hickey tapped over a free and Devaney pointed from play when he added his side's last score of the evening.

But the Glencar Manor challenge then ran out of steam and Ballinamore finished strongly when they added an unanswered four points to their tally, Luke Murphy, Wayne McKeon (free), Shane Moran and Dean McGovern added a point each for Ballinamore.